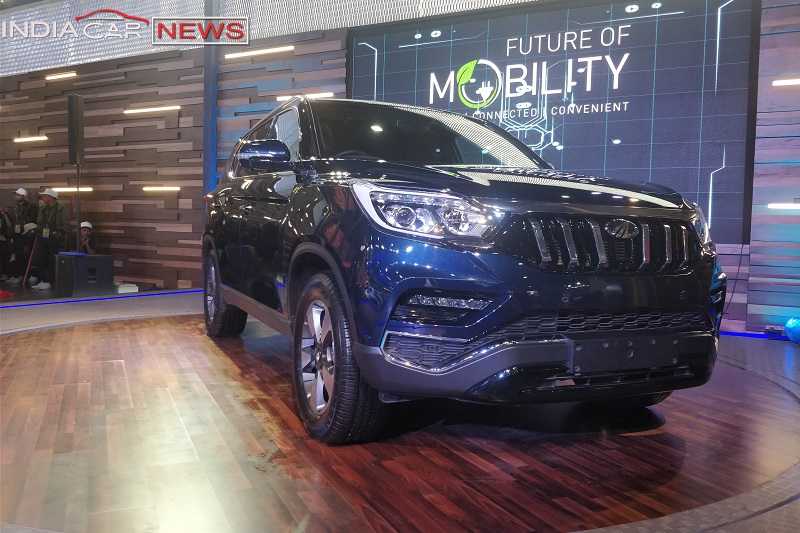 – The Mahindra XUV700 will be based on new generation SsangYong Rexton.

– This premium SUV will take on the Toyota Fortuner and the Ford Endeavour.

Mahindra & Mahindra will launch 2 all-new SUVs in India before the end of this financial year. The company will first introduce a 7-seater premium SUV – codenamed Mahindra Y400, which will be followed by a sub-4 meter SUV – codenamed S201. The model we are talking here is the 7-seater SUV, which is likely to be called the Mahindra XUV700. It will be Mahindra’s most expensive SUV in India. The company has officially announced that the new premium SUV will go on sale in India on November 19, 2018. This SUV will stack up against the Toyota Fortuner and Ford Endeavour. It is basically the rebadged new Rexton, which is already on sale in select global markets.

Just to jog your memory, the Mahindra XUV700 was first previewed at the 2018 Delhi Auto Expo. This will be Mahindra’s flagship SUV in the Indian market. It is expected that the new model will be priced relatively on lower side to take a competitive advantage over Fortuner & Endeavour. The SUV will be imported as CKD kit and then locally assembled at Mahindra’s Chakan based plant. The cabin of the SUV is sourced from the global SsangYong Rexton, which means the SUV gets several segment-leading features. While the overall profile and size of this SUV is similar to the global Rexton, it comes with Mahindra-like face and new body cladding. This 7-seater SUV has an all-new design and it looks completely different from the previous Rexton. For people not in the known, the new gen SsangYong Rexton was first previewed as the LIV-2 concept at the 2016 Paris Motor Show. Read – Upcoming Mahindra Cars In India 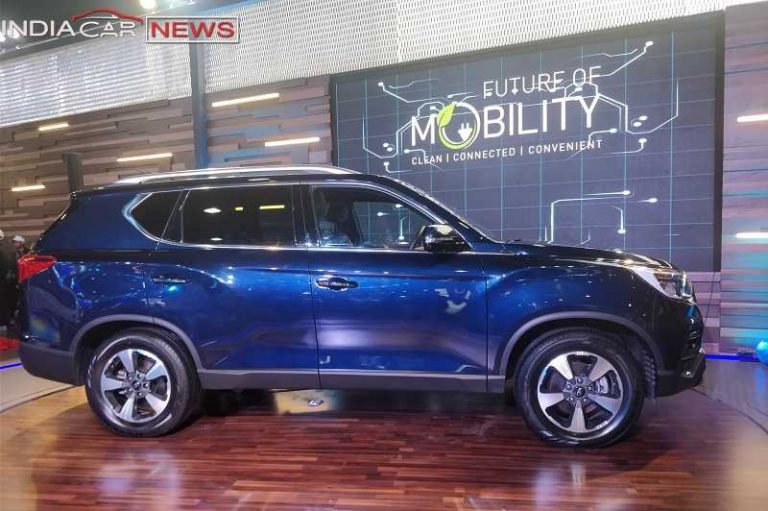 The Mahindra XUV700 or simply the rebadged SsangYong Rexton for the Indian market was unveiled at the 2018 Delhi Auto Expo. This SUV will come to India via CKD (Completely Knocked Down) route, and then assembled at Mahindra’s production facility. With this model, Mahindra also plans to set up a premium zone at most of its dealerships. The company has announced that the SUV will officially go on sale in India on November 19, 2018.

With local assembling and use of locally-developed parts, the new Mahindra’s 7-seater premium SUV is expected to be price competitively in the market. Media reports claim that the SUV will undercut rival by Rs 4 lakh to Rs 5 lakh. As for the Mahindra XUV700 price, we expect it to fall in the range of Rs 22 lakh to Rs 27 lakh. Read – 2018 Mahindra XUV500 – Price & Details 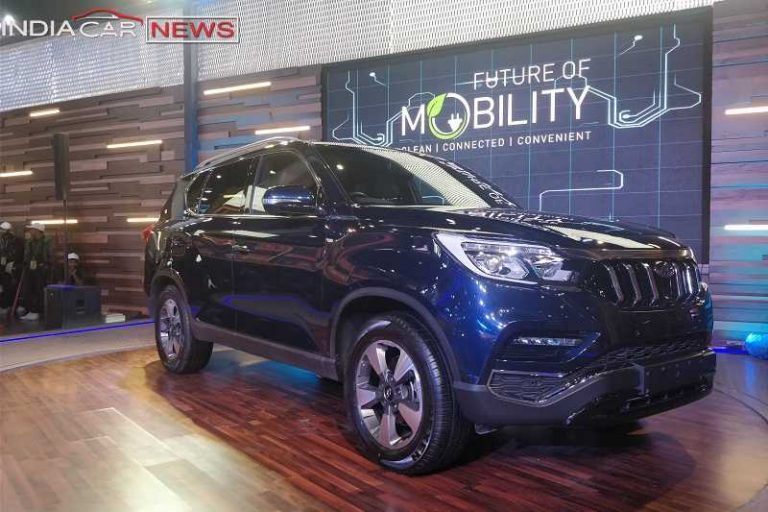 Mahindra remains tight lipped about engine details of the vehicle. However, Mahindra has confirmed that the India-spec model will share the engine with the global model. It will be powered by a 2.2-litre, turbocharged diesel engine sourced from the SsangYong Rexton SUV. This oil burner unit is claimed to offer progressive acceleration and a strong low end torque. The turbocharged motor pushes out a top power of 187bhp at 4,000rpm against a peak torque of 420Nm between 1,600rpm and 2,600rpm. Check Out – Mahindra TUV Stinger Convertible SUV Concept Pictures & Details

Power will be transmitted to wheels via Mercedes-Benz sourced a 7-speed torque-converter E-Tronic automatic gearbox along with a 6-speed manual gearbox.

As mentioned above, the engine details of the new Mahindra SUV will feature a 2.2-litre turbocharged diesel engine. The oil burner is likely to deliver a fuel economy around 15kmpl. Check Out – Mahindra KUV100 Xtreme Picture Gallery

Featuring the new-generation body-on-frame chassis from SsangYong’s crew-cab, Mahindra XUV 700 is primarily a rebadged Rexton that has recently taken a leap into the new generation globally. In terms of styling, the SUV shares most of its design cues from the LIV-2 concept that broke cover at the 2016 Paris Motor Show. Design inspiration for the SUV comes from SsangYong’s new ‘Dignified Motion’ philosophy. The new model comes with slightly toned down styling over the concept version. Global Rexton’s front fascia is equipped with chrome accents, new grille, LED headlamps with LED DRLS and large bumper looks assertive. Read – New Details On Mahindra XUV Aero Coupe Emerge

The India-spec model, however, features the quintessential Mahindra elements that bring it on par with fellow Mahindra models. Upfront is a Mahindra’s signature styling with chrome ladened grille. The side profile gets rugged alloy wheels and pronounced wheel arches. On sides, the SUV has sharp creases, sloping roofline and slim A & B pillars that give it a sporty profile. At the back, the SUV comes with LED rear combination side lights, roof integrated spoiler with high-mounted LED stop light and LED number plate lights. Read – New-generation Mahindra Thar In The Works

In terms of proportions, the SUV is likely to be akin to the SsangYong Rexton G4 measuring 4,850mm in length, 1,960mm in width and 1,800 in height. The 2,865mm long wheelbase hints at a large cabin and the ground clearance is likely to be notably more than Fortuner. 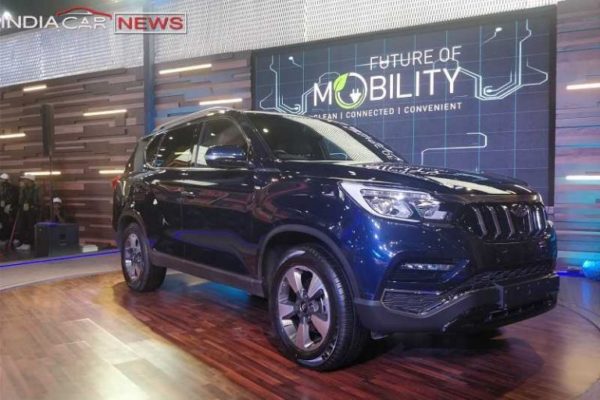 In line with the exterior, the interior has been styled to reinforce its sporty character. To infuse it with upmarket looks, Mahindra adds some contemporary elements and high tech in-cabin tech. The carmaker might offer the range-topping trim with a 9.2-inch touchscreen infotainment system with Apple CarPlay and Android Auto connectivity along with several connected apps such as navigation maps. The SUV might also get a separate 10.1-inch displays on the back of the front captain seats for the rear passengers. The seats are likely to come with massage function as well. Read – Ford & Mahindra To Develop Hyundai Creta Rival

The dashboard layout looks simple and features several horizontal elements. The steering wheel, instrument panel and button-garnished gives it a modern appeal. The SUV is expected to brim with advanced tech such as mood lighting, electric sidesteps & technology, multi-functional steering wheel, selectable all-wheel drive system, advanced emergency braking system, ABS with EBD, hill assist and 9 airbags. The global-spec Rexton G4 also comes with several segment first features like a 360 degree camera and key-sensing auto locking and tailgate opening. We are not sure that the India-spec XUV700 will come with these features or not. 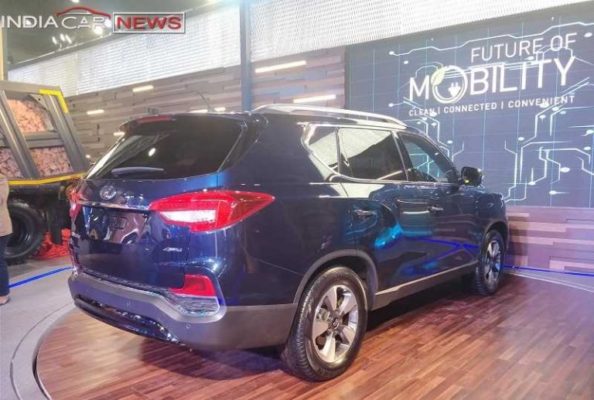 In the premium SUV space, the Mahindra XUV700 will lock horns against the Toyota Fortuner and the Ford Endeavour that are currently dominating the segment. However, it will be more affordable than the other two.

The new Mahindra 7-seater premium SUV will have generous boot space to offer, even with all 7-seats unfolded. One can expand the luggage area by folding the second and third row seats. The SUV will have a large glovebox along with several cubby holes to keep knick-knacks. The second row captain seats will have the cup holders.

Unlike other Mahindra cars, the XUV700 premium SUV will be high on safety. The SUV is based on the Ssangyong Rexton G4 that achieved top safety rating in 2017 Korean New Car Assessment Program. The latter one comes loaded with safety fitments such as an advanced driver assistance system, nine way airbags and quad-frame body chassis. However, there is no clarity whether the XUV700 will be offered these safety features or not. Read – Mahindra Scorpio Electric Under Development

Design of Mahindra’s new 7-seater SUV is quite masculine. Interior of the car is packed with a range of high-end comfort features and safety fitments. Mahindra might offer two powertrains on the SUV – a 2.2L turbocharged diesel and a 2.0L turbo petrol. For performing transmission duties, Mahindra XUV700 might get a 7-speed torque-converter E-Tronic automatic, a 6-speed manual and an 8-speed automatic unit. It will be an affordable option for buyers who are considering the Fortuner and Endeavour. Speculations suggest that it might undercut its arch rivals with Rs 4 lakh – Rs 5 lakh. Upon launch, the Mahindra XUV7000 will be the brand’s flagship model that could be an affordable 7-seater vehicle for the large Indian families.