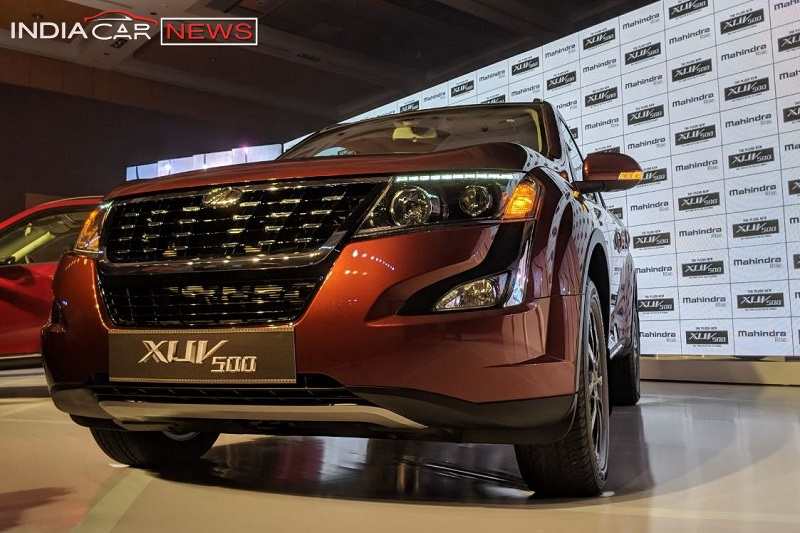 – The new Mahindra XUV500 facelift is equipped with a more powerful diesel motor.

The 2018 Mahindra XUV500 facelift comes with major design as well as mechanical changes. The diesel version of the SUV is now more powerful than the pre-facelift. It is equipped with the same 2.2-litre mHawk diesel engine, but it has been tuned for more power and torque figures. This engine produces 155bhp of power and 360Nm of torque, which is around 15bhp more than the previous model. In terms of design changes, the updated XUV500 has new bold grille with chrome treatment, new headlamps and LED DRLs, new taillight design and alloy wheels. The cabin gets plusher with premium soft touch materials, dual-tone colour scheme and added features. The XUV500 is currently facing competition from the likes of Tata Hexa and Jeep Compass. 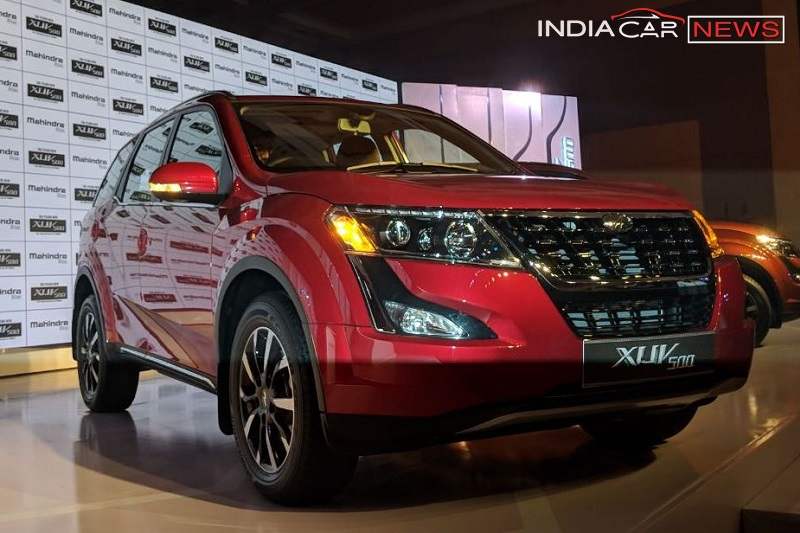 Despite packed with a more powerful diesel engine and new features, the new XUV500 facelift is cheaper than the previous model. The pre-facelift XUV500 was retailed at Rs 12.45 lakh for base model and Rs 18.59 lakh for top-end model. Featuring new updates, the new 2018 XUV500 is priced between 12.32 lakh and Rs 17.88 lakh (ex-showroom, Mumbai). You May Also Like – Upcoming Mahindra Cars In India

The original design and dimensions of the XUV500 facelift remains intact. Though, the SUV gets cosmetic design upgrades giving it a refreshing look. The facelifted model comes with a new look front fascia, featuring a newly designed bolder grille with thick chrome surround. It comes with newly designed bumper with a centre air-dam that merges with the grille, newly styled headlamps with double barrel projector lights and LED DRLs (Daytime Running Lights). Besides, the 2018 Mahindra XUV500 features a new set of alloy wheels with 10-spoke rims similar to the XUV Aero concept that broke cover at the 2016 Delhi Auto Expo. Also See – 2018 Mahindra XUV500 Vs Jeep Compass 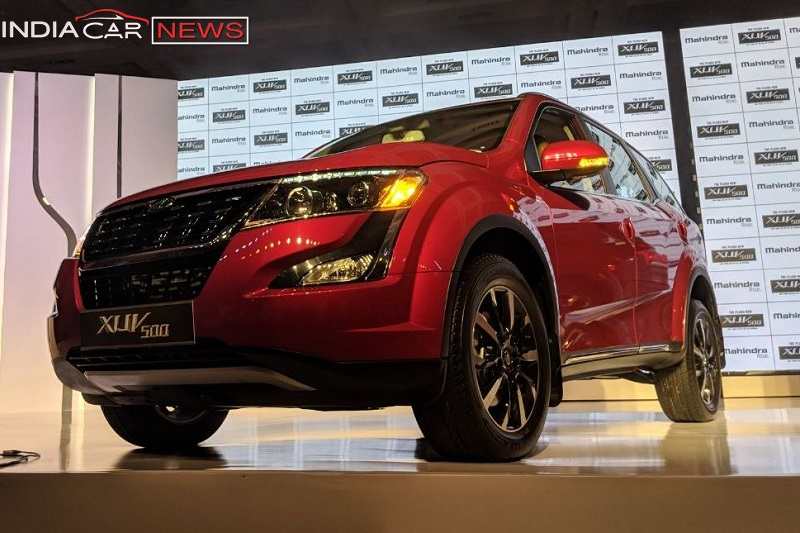 The XUV500 facelift measures similar to the pre-facelift model. That means the overall length, width and height of the SUV measure 4,858mm, 1,890mm and 1,785mm respectively. It continues to sit on 2,700mm of wheelbase, and stand on a ground clearance of 200mm. It also has a boot space of 720-litres. Read:Mahindra Scorpio 2018 – All You Need To Know

Interior, too, has been revised with a pack of new features. The 2018 XUV500 facelift comes with new Quilted Tan Leather seats, and soft touch leather dashboard and door trims with premium stitch lines. Besides, the centre console gets piano black finish that adds to its premium feel. The SUV is equipped with a 7.0-inch touchscreen infotainment system, which will be compatible with Android Auto. Similar to the previous model, the updated one feature all-black premium cabin and seven-seats layout. The SUV also gets several connectivity features like Ecosense, Mahindra’s connected applications, emergency call and android auto. 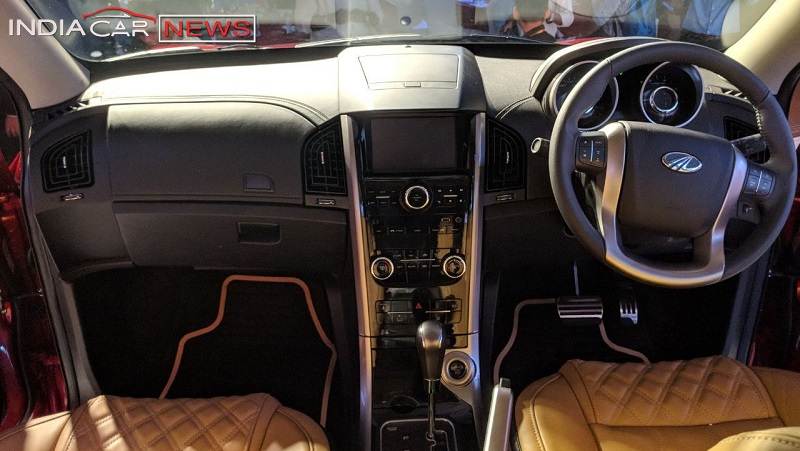 The 2018 Mahindra XUV500 facelift is powered by the same 2.2-litre mHawk diesel engine, which is claimed to be 15bhp more powerful than the previous motor. This eVGT diesel engine is capable of producing a maximum power output of 155bhp at 3,750rpm and a peak torque of 360Nm at 1750-2800rpm. The previous model was powered by a 140bhp, 2.2-litre diesel engine. With added power, the new XUV500 becomes equally powerful to the premium Ford Endeavour that offers 157.7bhp. The top-end models will take on the likes of Toyota Fortuner and Ford Endeavour.

The petrol version of the XUV500 facelift derives its power from a 2.2-litre turbocharged engine that churns out a maximum power output of 140bhp along with a peak torque of 320Nm. Transmission options include a 6-speed manual and a 6-speed automatic unit. While the FWD (front-wheel-drive) is available as standard, the AWD (all-wheel-drive) system comes as optional on the top-end W11 variant. The SUV is claimed to offer better NVH levels, thanks to reduced turbocharger and air-induction noise and modified door sills for reduced wind noise. The suspension set-up has also been revised for better ride and handling experience. Also See – Tata Hexa Vs Mahindra XUV500

Since the engine of the SUV see a major jump in power output, the new XUV500 offer slightly less mileage than the previous model. The new model offers 13.8kmpl in city and 16kmpl on the highways. The petrol model delivers 10kmpl.

The new XUV500 facelift is Mahindra’s flagship product and is equipped with several comfort and convenience features. The top-end model gets leather upholstery for seats, gearbox and steering. The seats are designed in a manner to offer excellent thigh and back support; however, the third row seats are good for kids only. Measuring over 4.5 metre in length, the SUV offers decent legroom and headroom space for both front and rear passengers’ seat. Talking about features, the vehicle gets rear air-conditioning vents, power steering, adjustable seats, engine start/stop button, etc. Also See – Mahindra U321 MPV India Launch & Other Details 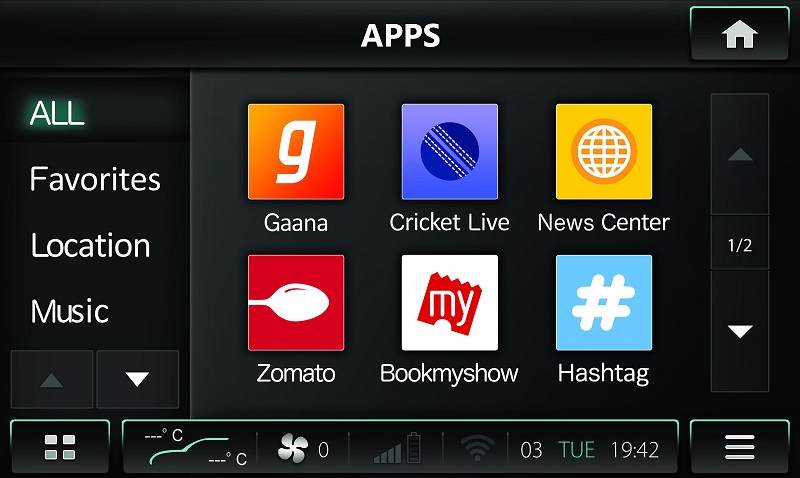 The pre-facelift model was loaded with several new connectivity features such as Android Auto, EcoSense, Connected applications and emergency call. These features have been carried over the updated model. Besides, the new model receives updated infotainment system with better touchscreen. The Android Auto technology enables user to connect smartphone with car’s infotainment system to access google search, navigation, music, calls, etc. Adding to it, the Connected Apps on the SUV is available for the first time in the industry. On the flip side, the Ecosense reduces CO2 emission and curbs fuel consumption. Besides, the SUV also gets Industry first Smart Watch connectivity through Bluesense. With this Smart Watchapp, user can control features like audio control, climate control, emergency assist, location services, etc.

With better looks, more powerful engine and loaded cabin, the new XUV500 facelift could be a viable alternative to other SUVs in its league. In fact, it is now equally powerful to the Ford Endeavour and closer to 174.5bhp version of Toyota Fortuner. The SUV will challenge the likes of Tata Hexa, Jeep Compass, Hyundai Tucson and others in its league.

2018 Mahindra XUV500 facelift is powered by a 2.2-litre mHawk diesel engine that produces 155bhp of power and 360Nm of torque, which makes it 15bhp more powerful and 40Nm torquier than the pre-facelift model.