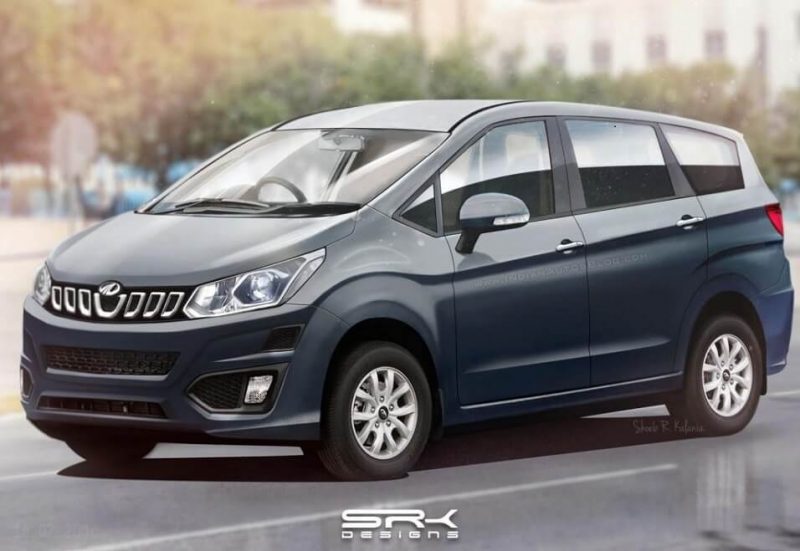 – It will be Mahindra’s first MPV to be based on the monocoque platform.

– Likely to be launched during festive season, the new U321 MPV will mark the debut of Mahindra’s new 1.6-litre diesel engine.

Mahindra & Mahindra, the homegrown UV maker will launch 3 all-new cars this year. The company will launch the new XUV700 7-seater SUV, a sub-4 meter SUV codenamed S201 and a new flagship MPV – the Mahindra U321. The model we are talking here is the brand’s new flagship MPV, which is expected to be launched during this festive season. Designed and developed by Mahindra’s North American Technical Centre, this new MPV will be stacked up against the segment-leader – Toyota Innova Crysta. It will be the company’s first MPV to be based on moncoque platform. This MPV will also mark the debut of the new 1.6-litre mFalcon diesel powertrain, which has been developed jointly by Mahindra & SsangYong. The carline will also be available with a new 1.5-litre petrol engine option.

The new Mahindra U321 MPV will come as a replacement for the ageing Xylo. Design and styling details of the vehicle are still under the covers; though, the spy pictures suggest that it will come with conventional design language. In terms of styling, the premium SUV will get Mahindra’s signature toothed grille, projector headlamps and split radiator air-inlets. Sporting three-row seats, the new Mahindra MPV will come with a pack of comfort and safety goodies.

This premium MPV will be equipped with features like ABS and front dual-airbags as standard. Mahindra is aiming at aggressive pricing for this MPV. There is a huge gap between the Ertiga and the Innova Crysta in terms of pricing, and Mahindra is aiming to price the MPV somewhere between these two MPVs. This model will also get feature-loaded cabin with equipment like touchscreen infotainment system with smartphone connectivity features, automatic climate control and leather seats. Read – New Mahindra Compact SUV To Challenge Tata Nexon

According to a latest report, Mahindra & Mahindra will bring in its all-new MPV during this year’s festive season. As of now, there is no official word on the same. We will update the official launch date and details once the carmaker announces it. Read – Mahindra Aero Coupe SUV – Pictures & Launch Details

Mahindra U321 Price In India

The production of the U321 MPV will take place at Mahindra’s Naskik based facility, and its Igatipuri plant is likely to be the hub for development and supply of the powertrains. The company made an investment of Rs 1,500 crore on both the manufacturing facilities. The Nashik unit is also serves as production hub for the Thar, Scorpio Verito, Xylo, NuvoSport and Bolero. Using the locally manufactured engines and components, the new Mahindra MPV is likely to come with competitive pricing.

In terms of pricing, it will sit above the Maruti Ertiga and below the Toyota Innova Crysta. The entry-level variant of the vehicle is estimated to be priced around Rs 10 lakh and the top-spec model could be offered at Rs 15 lakh (ex-showroom). If launched at this price point, the new Mahindra MPV will also take head-to-head against the Tata Hexa and the fully loaded Renault Lodgy.

As mentioned above, the new Mahindra MPV will sit on the monocoque platform that also underpins the XUV500. This will also make it lighter than the Innova Crysta, which is based on the ladder-frame chassis. The architecture used for the U321 MPV has been developed by the Mahindra’s North American Technical Centre (MNATC) in Troy, Michigan. The pictures of the MPV give inkling of the design and styling that will be conventional. In a bid to accommodate seven-seat layout, the model will sit on a larger wheelbase and short overhangs, carving out more space for the occupants. Read – This Will Be Mahindra’s Answer To Toyota Fortuner

The front fascia of the U321 MPV will share resemblance to the current Mahindra models. It is expected that the car will have signature toothed grille, large bumper with split radiator air-inlets, projector headlamps with LED daytime running lights (DRLs) and newly-designed fog lamp enclosures. Sculpted bonnet and shorter overhangs offer sportier front profile. Carrying the boxy and tall stance, the premium MPV will feature multiple creases and curves at the sides. The flared wheel arches of the car will be fitted to newly styled 16-inch multi-spoke alloy wheels. Other design elements on the sides include ORMs with integrated blinkers, chromed door handles and roof rails. The rear profile is flat, featuring design elements like LED tail-lights, a roof-mounted spoiler with stop light, large tail-gate and big bumper.

Similar to the exterior, the new Mahindra MPV will share most of the design bits and features with Mahindra XUV500. There will be a dual tone dashboard with chrome detailing. In order to give it a premium feel and appeal, Mahindra has added lots chrome on the gearshift lever, door handles, gearshift lever and air conditioning vents and controls. A large touchscreen infotainment system with several connected car applications will solve the connectivity purposes. This system will also be compatible to Android Auto and Apple CarPlay. Features such as air-con vents across rows, multi-functional steering wheel, fabric upholstery, front centre armrest and leather wrapped seats, steering and dashboard will also be on offer. Check Out – Mahindra ROXOR Off-Roader Pictures & Details

The exact engine details of the MPV are yet to be revealed by the homegrown automaker. If reports are to be believed, the U321 MPV will use the all-new 1.6-litre turbocharged mFalcon diesel powertrain. This engine is co-developed by Mahindra and SsangYong. This oil burner churns out a maximum power output of 125bhp and a peak torque of 305Nm. Compared to its direct rival Renault Lodgy’s 1.5L dCi engine, these figures are much higher. The former one delivers a top power of 110PS and 245Nm of torque.

For transmission duties, the new U321 MPV will get a 6-speed manual or a 6-speed automatic unit. Mahindra is also working on a range of new petrol engines with different displacements – 1.2-litre, 1.5-litre and 2.0-litre. Speculations are on rife that the Mahindra U321 might come with a new 1.5-litre petrol unit, developed jointly by Mahindra and its Korean subsidiary, SsangYong. This engine is expected to produce close to 100bhp of power. It will also be offered with both manual and automatic options. Check Out: Mahindra TUV Stinger Convertible SUV – Pictures & Details

On the fuel efficiency ground, the new Mahindra MPV is likely to be a great performer. This will also give it an edge over its arch rival – Toyota Innova Crysta. The diesel and petrol models of Toyota’s MPV deliver an ARAI claimed mileage of 13.68kmpl (MT) – 11.36kmpl (AT) and 11.25kmpl (MT) – 10.75kmpl (AT) respectively. Mahindra’s new MPV is likely to offer fuel efficiency around 18kmpl (diesel) and 14kmpl-15kmpl (petrol).

Set to replace the ageing Xylo, the Mahindra U321 MPV will rival the top-selling Toyota Innova Crysta.