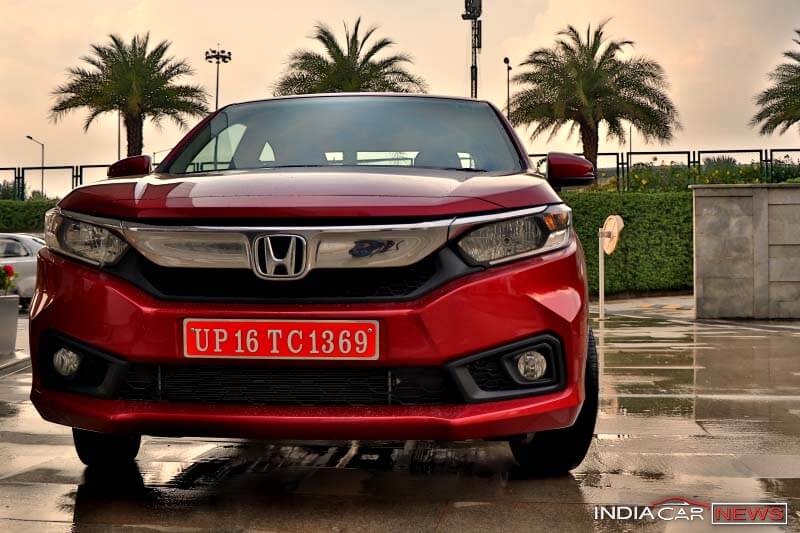 The New Honda Amaze is India’s first most affordable diesel car to get CVT gearbox.

Honda had launched the new-generation Amaze sub-4 meter SUV in India on 16th May 2018. The new Honda Amaze 2019 was the most searched car on Google last year, which shows the popularity of the new model. It is also Honda’s most selling model in the past 1 year, and is doing average monthly sales of over 7,800 units. In fact, Honda had delivered over 63,000 units of the new Amaze as of December 2018. In fact, the Amaze became the fastest new Honda car in India to achieve 50,000 sales number.

The 2019 Honda Amaze is available in four trim levels – E, S, V and VX – in petrol and diesel guise. Prices of the sub-4 meter sedan fall in the range of Rs 5.80 lakh and Rs 9.10 lakh (ex-showroom, India). At this price, it continues to take on the Maruti Suzuki Dzire, Ford Aspire, Hyundai Xcent, Tata Tigor, Volkswagen Ameo. The second-generation Amaze sits on an all-new low-cost platform that will also be used in Honda’s upcoming subcompact SUV.

Sporting a completely new design, the new Honda Amaze 2019 looks more evolved and premium than the previous generation model. Interior and material quality of the sedan has also been classed up. Engine setup of the new Honda Amaze 2018 includes a more refined 1.5-litre i-DTEC diesel and 1.2-litre i-VTEC petrol unit. While the former comes with a CVT automatic gearbox with paddle shifters, the latter one is available with both manual and CVT options. Mileage figures of the sedan stand at 19.0kmpl (petrol CVT) – 19.5kmpl (petrol MT) and 23.8kmpl (diesel CVT) – 27.4kmpl (diesel MT). Read – 6 Things Big Changes On New Honda Amaze 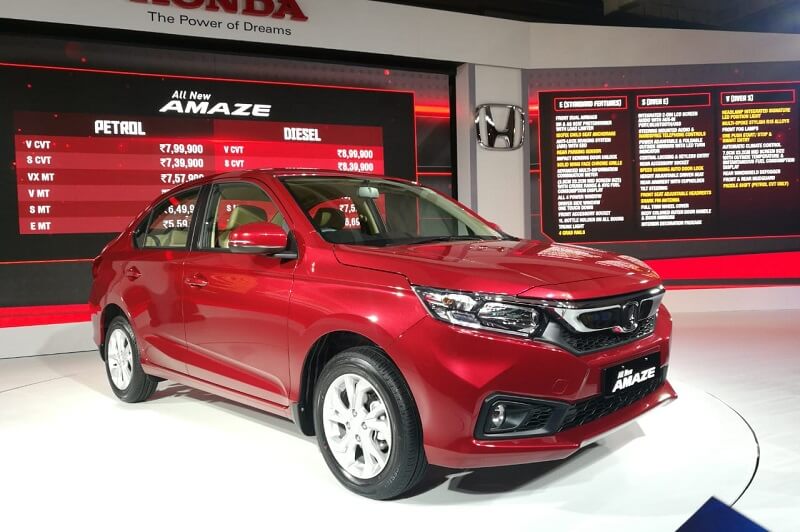 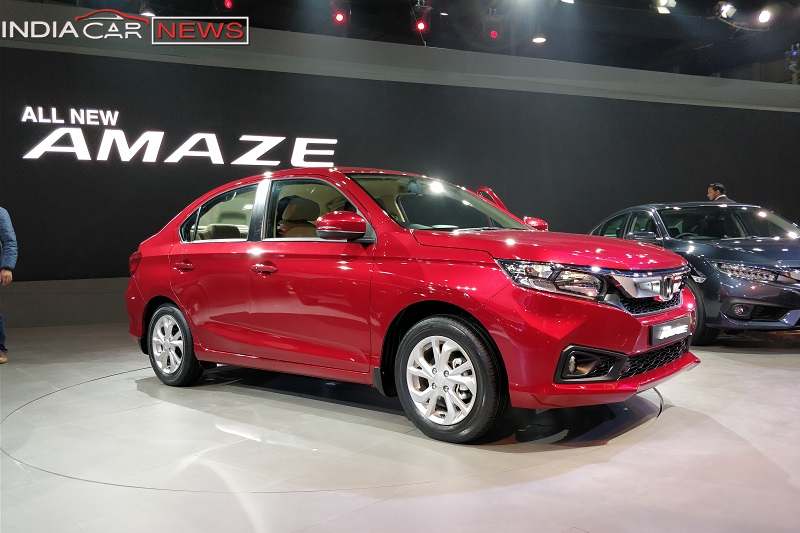 With comprehensive cosmetic upgrades, the new 2019 Honda Amaze looks a lot better than the old model. The new connectivity and comfort features with improved quality and space further enhance its premium feel and appeal. Interestingly, the new Amaze is India’s first affordable car to offer a CVT automatic gearbox on diesel variants. It is the only compact sedan to offer steering mounted paddle shifters and the second in its category to have manual and automatic gearboxes with both petrol and diesel powertrains. Check Out – Upcoming Honda Cars in India

Engines have also been tuned for achieving more refinement and better performance.  All these attributes make the new-generation model slightly more expensive than its predecessor. The new Honda Amaze 2019 carline comes in four trims – E, S, V and VX – priced in the range of Rs 5.80 lakh (for the entry-level variant) and Rs 9.10 lakh (for the range-topping model). Read – Honda HR-V Is Coming To India 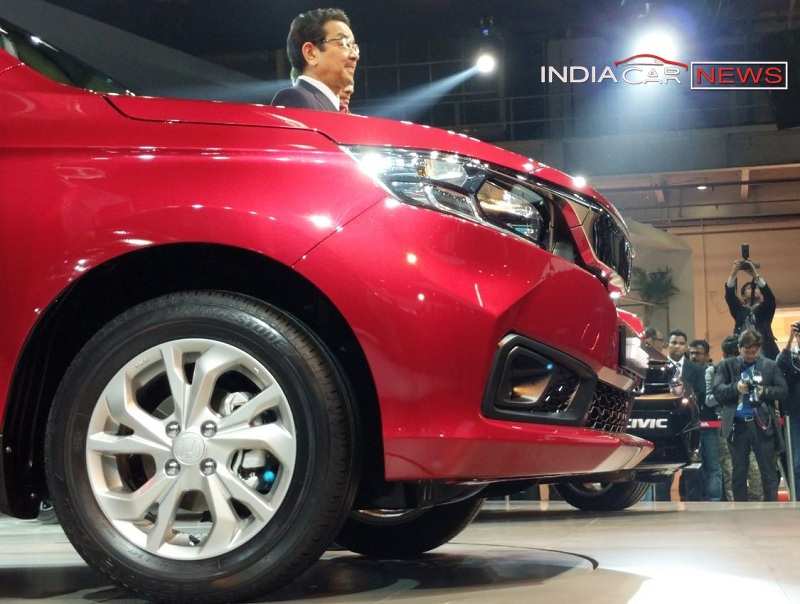 New Honda Amaze 2019 – Which Variant Should You Buy?

As mentioned above, the 2019 Honda Amaze has been designed on an all-new platform, and carries a completely different design. The styling has been done in tandem with Honda’s new EXCITING H design tenet, which we have already seen on the new City. Most of the design bits on the new Amaze are carried over from the City sedan, thus making it looks more evolved and sportier than before. Face of the subcompact sedan, however, seems inspired by the Accord. Similar to its premium sibling, the new Honda Amaze 2019 features a new grille and new LED headlamps with LED daytime running lights (DRLs) and LED position light. Read – New-generation Honda City Under Development 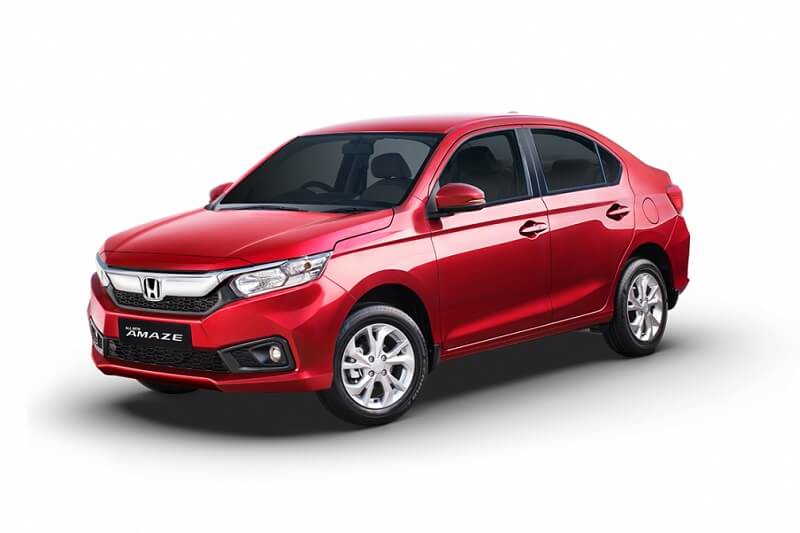 The bumper has also been re-designed and looks bolder than before. The more pronounced bonnet and a flattened nose add more to its new look. The changed silhouette and slightly lowered roof-line enhance aerodynamics of the sedan. Moving to sides, the 2019 Honda Amaze sports new dual-tone diamond cut alloy wheels, chrome treated door handles and redesigned ORVMs with integrated LED blinkers. The rear profile of the car has been completely revised and it now looks more proportionate. The sedan sports a coupe-like plunging roofline, new tail-lamps with LED bits, bumper, new tail-gate design and roof-spoiler. Check Out – New Honda Amaze Picture Gallery

Visually, the 2019 Honda Amaze appears bigger than the old model. While the sedan’s previous version was 3900mm long, 1,680mm wide and 1,505mm tall, the new-generation model measures 3,995mm in length, 1,695mm in width and 1,500mm in height. This makes it around 5mm longer, 15mm wider and 5mm shorter than the predecessor. Its wheelbase has also been stretched to 2,470mm from 2,405mm. In fact, the ground clearance of the sedan has been increased to 170mm. With seating capacity of five adults, the subcompact sedan now offers a boot space of 420-litres, which is 20-litres more than before. It has a fuel tank capacity of 35-litres. Read – Honda To Launch 3 New Cars This Year 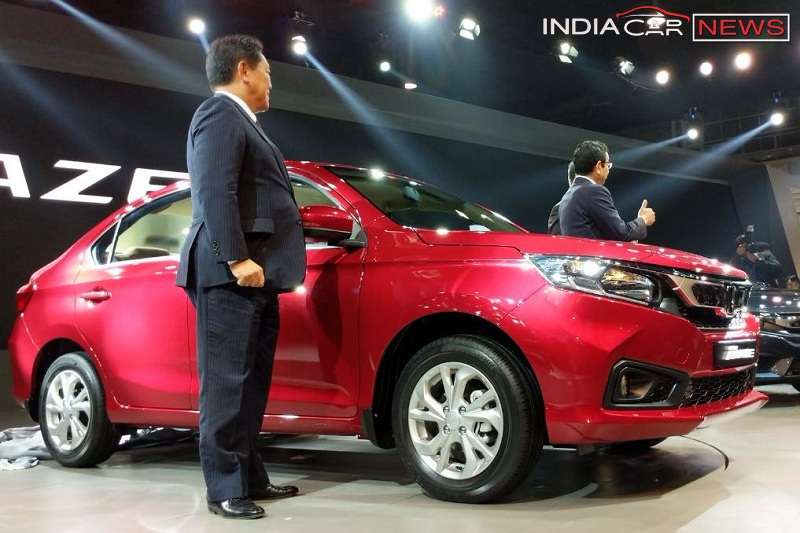 Comprehensive upgrades continue inside the cabin as well. The new Honda Amaze 2019 gets a new dashboard with dual-tone (Black and Beige) theme that seems to be derived from the City sedan. Though, the major change comes in the form of a new 7.0-inch DIGIPAD touchscreen infotainment system borrowed from the City sedan. This system comes with smartphone apps integrations such as Google Android Auto, Apple CarPlay and MirrorLink. It also gets built-in Mapmyindia navigation with live traffic support, HDMI input and Wi-Fi connectivity.

Under the hood, the new 2019 Honda Amaze houses a more refined iteration of the 1.5-litre i-DTEC turbocharged diesel engine. The diesel manual and CVT variants returns a claimed power output of 98.6bhp (100PS) with 200Nm and 78.9bhp (80PS) with 160Nm respectively. On the other hand, the petrol version of the sedan continues to use the same 1.2-litre i-VTEC petrol engine that’s good enough for 88.7bhp (90PS) at 6,000rpm and 110Nm of torque.

Both the powertrains comes with a 5-speed manual and a CVT (Continuously Variable Transmission) automatic gearbox options. One must note that the diesel CVT is available in the S and V mid-level trims. This makes the new Honda Amaze 2019 the second subcompact sedan to feature manual and automatic gearboxes on both petrol and diesel engines. It also became India’s first affordable car to get a CVT gearbox on the diesel model. Pictures & Details – New-generation Honda Accord 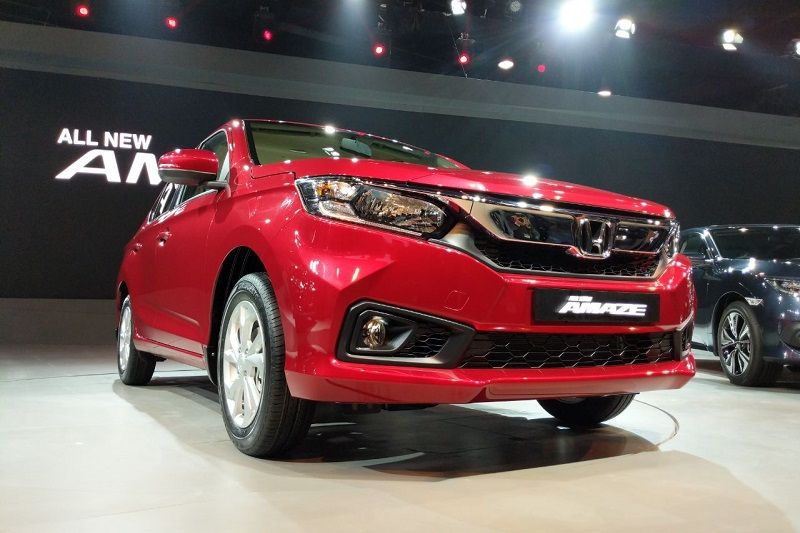 Mileage figures of the 2019 Honda Amaze are quite impressive. The petrol manual version of the subcompact sedan delivers an ARAI certified fuel economy of 19.5kmpl, the CVT model offers 19.0kmpl. On the other hand, the diesel variants with manual and CVT gearbox promise a claimed mileage of 27.4kmpl and 23.8kmpl respectively. Read – 7-Seater 2018 Honda CR-V To Get A Diesel Engine

With an all-new design, classed-up interior and a more powerful diesel engine, the 2019 Honda Amaze competes with the new Maruti Suzuki Dzire, which is currently dominating the segment. It also locks horns against the new Hyundai Xcent, Tata Tigor, Volkswagen Ameo and other sub-4 meter sedans. 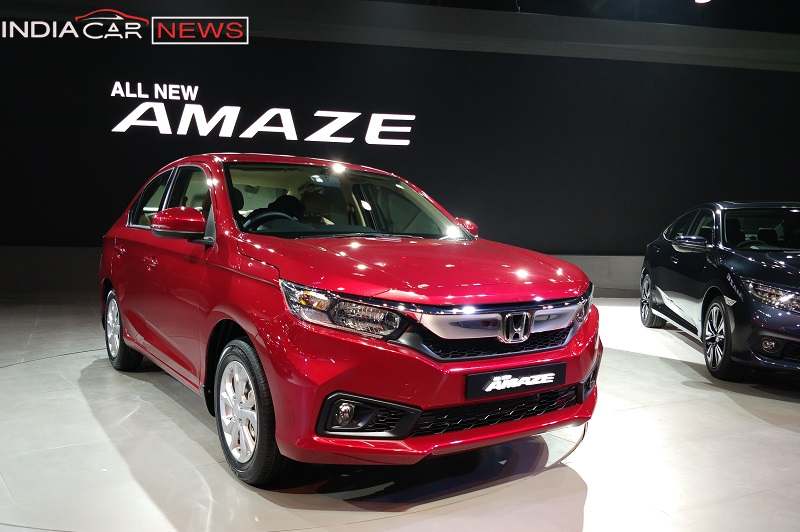 In order to make more space for occupants, Honda has increased dimensions of the sedan. With wider and taller stance, it is more generous to offer headroom and shoulder room to front and rear occupants. Similar to the old model, the 2019 Honda Amaze offers seat height adjustment (around 50mm) making it comfortable for short drivers. The front seats head restraints are protruded enough to rest your head comfortably. Features such as ECO lamp, vanity mirror with lid, tilt steering, head light off reminder, tachometer, centre interior light, trunk light and grab rail add more to its convenience level.

Honda cars are known for their well-packaging and practicality, and the new-generation Amaze is surely be a step ahead than its predecessor. Just so you know, the previous Amaze missed out some practical features such as climate control, adjustable neck restraints, seat belt height adjustment, etc. Prominent changes have been made to the interiors of the new sedan.

With more spacious cabin and new comfort and connectivity bits, the sedan will take on its arch rival – Dzire. For keeping knick-knacks, the 2019 Honda Aamze offers multiple points such as front and rear bottle holders, glove box, cubby holes, cup holders in centre console, and rear seat centre armrest, accessory socket, seat back pocket, etc. The subcompact sedan offers a boot space of 420-litre, which is more accommodating than its arch rival – the Maruti Dzire.

The 2019 Amaze sedan has witnessed significant updates inside and out. Besides this, the sedan has received a more refined engine lineup. Compared to the previous version, the new-gen model has a more mature looks and it carries sportier stance. Some of the major changes have been made inside the cabin including a new infotainment system, new upholstery and a pack of comfort and safety features. Improved material quality adds more to its premium appeal. The more refined diesel engine with CVT gearbox will surely attract more buyers. The aforementioned changes make the new Honda Amaze 2018 a good alternative to the new entrants in the segment.