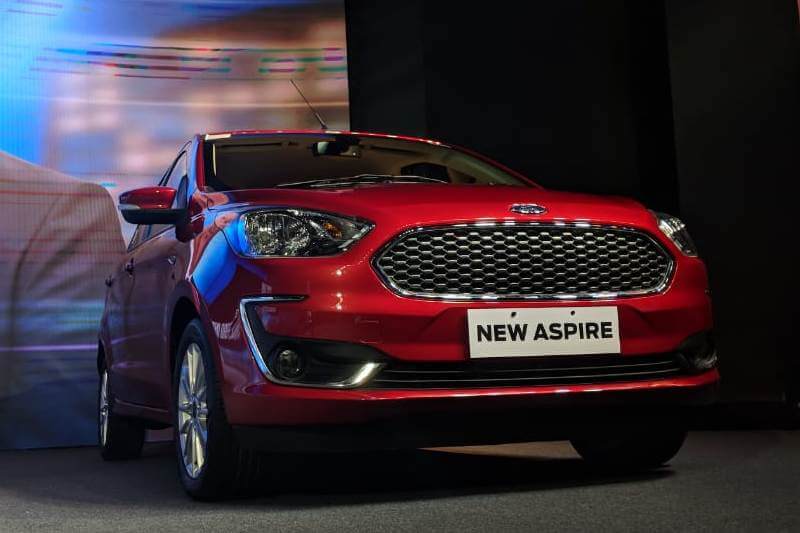 Available in petrol and diesel guise, the new Ford Aspire is priced in the range of Rs 5.55 lakh – Rs 8.49 lakh.

American automaker, Ford has finally launched the Ford Aspire 2018 facelift in the Indian car market. Available in petrol and diesel guise, the new Aspire is priced in the range of Rs 5.55 lakh – Rs 8.49 lakh (ex-showroom, Delhi). The production of the car has already been commenced at the company’s Sanand plant in Gujarat. In fact, the sedan has also reached to dealerships for bookings and customer previews. In the sub-4 metre sedan segment, the Aspire takes on the Honda Amaze, Maruti Suzuki Dzire, Hyundai Xcent and Volkswagen Ameo.

Just so you know, the Aspire sedan was first launched in 2015 as the Ford Figo Aspire and the company dropped the Figo badge from its name early last year. For 2018 model year, the sedan receives subtle design changes and feature upgrades. It comes equipped with a large floating 8-inch touchscreen display with SYNC3 infotainment system. This system is compatible with Android Auto and Apple CarPlay. Major changes, however, has been made under the hood. The new Ford Aspire 2018 facelift gets a new 1.2-litre, 3-cylinder petrol engine that also powers the new Freestyle. The oil burner continues with the existing 1.5-litre TDCI unit. Transmission choices include a 5-speed manual and a 6-speed automatic torque converter from the EcoSport. Read – New Ford Endeavour Facelift India Launch Details Revealed 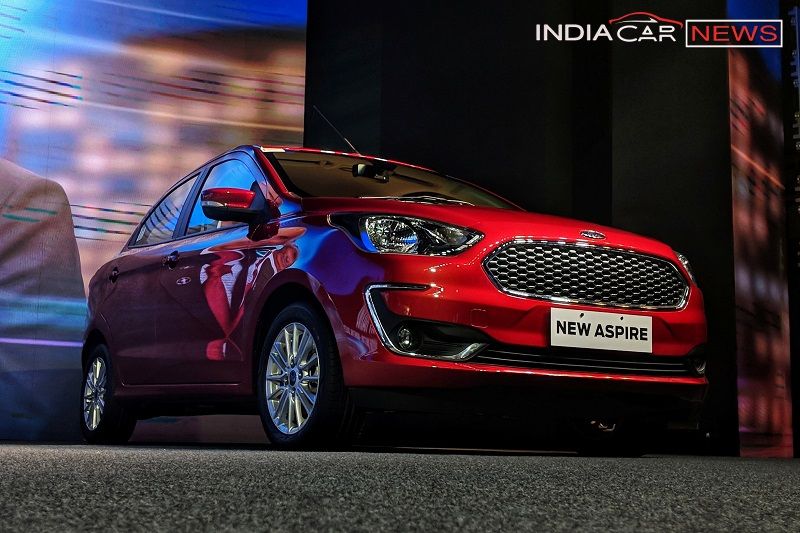 The new Aspire is available in five trim levels – Ambiente, Trend, Trend+, Titanium and Titanium+. While the petrol range starts from 5.5 lakh and goes up to Rs 7.24 lakh, the diesel model is priced between Rs 6.45 lakh and Rs 8.14 lakh. The top-spec Titanium 1.5L variant costs Rs 8.49 lakh (ex-showroom, Delhi). Ford claims that the Aspire service cost is lowest in its class, claimed at 38 paise per km for petrol and 45 paise per km for diesel. Read – New Ford Mustang India Launch Next Year

As mentioned above, the 2018 Ford Aspire facelift engine setup has been revised with a new 1.2-litre, 3-cylinder petrol engine. This Dragon family engine also powers the Freestyle and it delivers the best-in-class power and torque outputs – i.e. 95bhp and 115Nm respectively. With these figures, it becomes more powerful than Honda’s 1.2-litre i-VTEC and Maruti’s 1.2-litre K-Series petrol engines. The diesel version continues to feature the 1.5-litre TDCi unit that does duty in the pre-facelift model. The oil burner can make a top power of 99bhp at 3,750rpm and 215Nm of torque between 1,750rpm to 3,000rpm. Read: 2018 Ford Figo Facelift Launch Details Revealed

For transmission options, the Aspire sedan gets a 5-speed manual and a 6-speed automatic torque convertor. The automatic gearbox is being offered with the diesel version only. No changes have been made to its suspension mechanism. The 2018 Ford Aspire continues to feature the Independent McPherson strut with coil spring and anti-roll bar upfront and semi-independent twist beam with twin gas and oil filled shock absorbers rear suspension units.

The Aspire facelift is claimed to be more fuel efficient than the previous model. While the petrol model returns an ARAI certified fuel economy of 20.4kmpl, the oil burner delivers 26.1kmpl. Read About – Ford EcoSport S And Signature Edition

With respect to dimension, the new Ford Aspire 2018 facelift measures 3,995mm in length, 1,695mm in width and 1,525mm in height with a wheelbase of 2,491mm. Similar to the previous model, it comes with a ground clearance of 174mm. The compact sedan also continues to offer a luggage carrying capacity of 359-litres that can accommodate up to 4 suitcases. 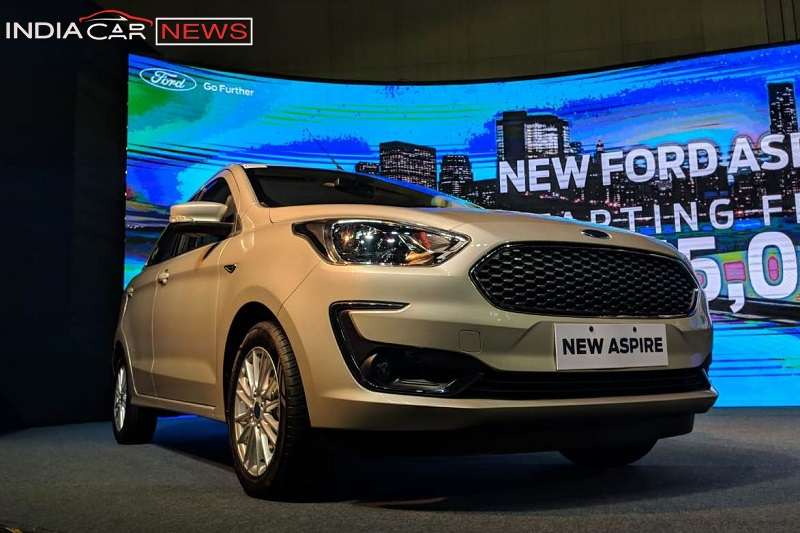 The 2018 model year of the compact sedan receives minor aesthetic updates. Major changes have been made to the face of the car. It comes equipped with a new hexagonal shaped mesh grille instead of the chromed Aston Martin esque unit. The front bumper has also been revised and the airdam at the bottom is now slightly narrower. It also gets newly styled headlamps. Read: Ford FreeStyle Crossover – All You Need To Know

Save for the newly designed alloy wheels and new ORVMs, the side profile too remain unchanged. At the rear end, the compact sedan gets revised bumper and the boot lid. 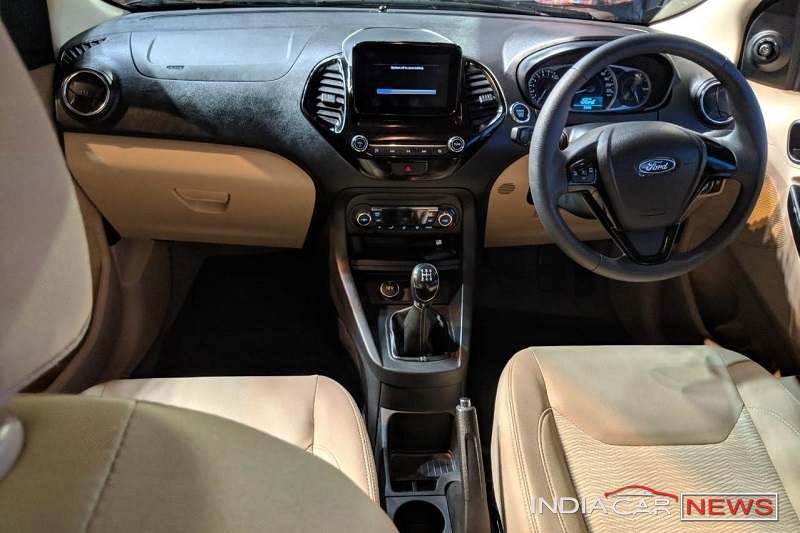 Unlike the exterior, the cabin of the compact sedan receives comprehensive updates. It gets dual-tone beige and black interior with restyled front seats and a foldable centre armrest. The dashboard has been revised with a new 8-inch floating touchscreen display. The display comes with new SYNC3 infotainment system, which is compatible with Apple CarPlay and Android Auto. The sedan also gets new start-stop button, new AC vents, automatic climate control and illuminated USB sockets. Read – Ford & Mahindra To Develop Hyundai Creta Rival