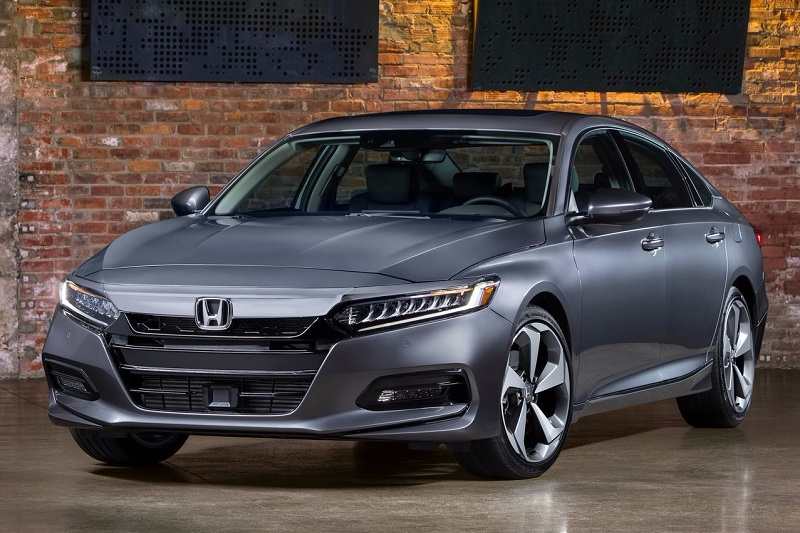 With new modular design and a more powerful turbo engine, the Honda Accord 2018 will be more expensive than its global current-generation model.

The tenth-generation Honda Accord has finally broke cover at an event in the United States. The 2018 model year of the mid-size luxury saloon is all new from the ground up with improved dimensions and more efficient turbocharged engines. Interestingly, the new Honda Accord 2018 is the world’s first front-drive car to feature 10-speed automatic transmission paired with the brand’s new-generation two-motor hybrid technology. Sporting a more evolutionary design, the 2018 Accord sits on an advanced new chassis design, and has a lighter and more rigid body construction. Interior is surely more feature laden than the current generation. It also hosts several new safety features, driver assistive and connected car technologies.

Commenting on the new 2018 Honda Accord unveiling, Jeff Conrad, senior vice president of the Automobile Division of American Honda Motor Co., Inc., said, “We are redefining the Honda Accord for a new generation of buyers by bringing something unexpected that challenges the idea of what a mainstream sedan can be. Even as we advance core values like great driving dynamics, safety performance and efficiency, the distinctive design of this all-new 2018 Honda Accord will help it appeal to both head and heart in equal measure.”

Design and styling of the new-generation Accord is heavy inspired from the new Civic sedan. Face has been styled with the new massive front single-frame grille, full-LED headlamps with integrated DRLs, slightly modified chiselled hood and LED fog-lights. Other key highlights include new C-shaped LED tail lamps, deeply sculpted body sides and short overhangs. ‘Dramatically-styled’, the 2018 Accord has also witnessed dimensional changes. The new model is longer, wider and lower than the current one. The wheelbase has also been stretched creating more space for occupants. Though, the seating position is lower than the existing model.  The better legroom and luggage area further add to its practicality. Photo Gallery – Upcoming Honda Cars in India 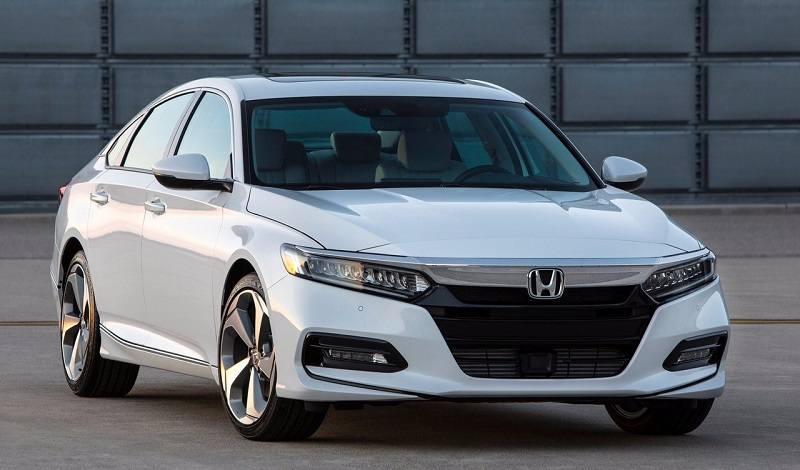 Interior of the new Accord brims with lots of new tech-savvy features such as an all-new HMI that includes a 7-inch TFT deriver’s meter and a new 8-inch display audio touchscreen interface. It also supports smartphone features with Apple CarPlay and Android Auto compatibility. On safety department, the 2018 Honda Accord is slightly ahead of the current generation.

Coming to engine setup, the new-generation model has ditched the 2.4-litre in-line four-cylinder and V6 motors for the new 189bhp, 1.5-litre and 250bhp, 2.0-litre petrol powertrains. Both the motors have already been used on the new Civic. The Asian-spec model is likely to come with the 4-cylinder petrol or diesel engines along with a hybrid powertrain option. The 2018 Honda Accord hybrid uses a 2-litre Atkinson cycle engine coupled to electric motors. Transmissions on offer are an all-new 10-speed automatic torque convertor and a 6-speed manual (only on the Sport variant).

Honda revealed the new Accord in Detroit on July 14, 2017. The saloon will be rolled out soon in the US market, and the bookings have already begun there. Production of the 2018 Honda Accord will take place at the carmaker’s Marysville, Ohio plant in the US. The Japanese automaker had re-launched the Accord brand in India in 2016, and it is quite early to comment whether the new generation model will arrive into Indian market or not. We expect the next gen Accord will hit the Indian shores towards the end of 2018.

New Honda Accord 2018 Price In India

Currently, the Accord is available in hybrid avatar only at Rs 37 lakh (ex-showroom, Delhi). The post GST prices of the saloon are yet to be revealed by the carmaker. The next-generation model is likely to come with both petrol and diesel engine options. We expect that the new Accord prices in India will fall between Rs 28 lakh – Rs 40 lakh (ex-showroom).

The 2018 Honda Accord carries major changes under the hood. The saloon has dropped the V6 and 2.0-litre naturally aspirated engines, and comes with smaller 1.5-litre and 2.0-litre turbocharged petrol engine. Both the motors are carried over from the new Civic. The 1.5-litre unit makes power worth 189bhp and 260Nm of peak torque, and the 2.0-litre mill churns out 250bhp at 6,000 and 370Nm of torque. The tenth-generation Accord is the world’s first car to get a 10-speed automatic gearbox, while a 6-speed manual unit is continue to be available only on the Sport variant.

The hybrid version of the sedan sources its power from a 2.0-litre, i-VTEC petrol engine combined with two electric motors packed with lithium-ion batteries. While the petrol engine develops 141bhp of power, the combined power output stands at 213bhp against 315Nm of torque. The Accord is also the first car in its segment to offer Sport Mode, and a total of three operating modes – EV Drive (pure electric) and Hybrid Drive (series hybrid) and Engine Drive (parallel hybrid). 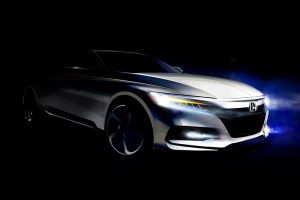 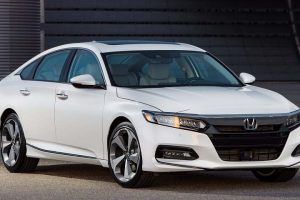 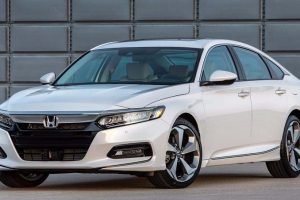 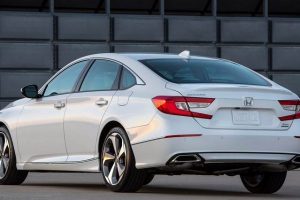 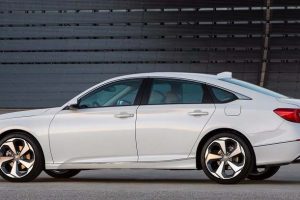 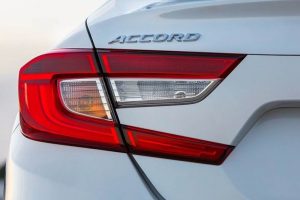 As mentioned above, the 2018 Honda Accord uses an advanced new chassis design, and has a lighter (around 50-80kg) body built with lots of high-strength steel and structural adhesives. This also improves crash strength and rigidity of the car. Honda has dropped the coupe version on the tenth-generation Accord carline. The new model is 10mm wider, and has 50mm longer wheelbase than its predecessor. Inspired by the new Civic sedan, the 2018 Accord looks more evolved and premium than the current model.

Honda says that the new Accord is ‘dramatically styled’. The saloon carries an angular front fascia and fastback roof that instantly reminds of the new Civic. The massive single-frame grille is new on the sedan. It also gets full LED headlamps with integrated daytime running lamps and LED fog lamps. The vehicle also gets fastback-like greenhouse area, featuring a sloping rear window merging into a short decklid. Other design highlights include slightly revised chiselled hood, deeply sculpted body sides, new C-shaped LED taillight enclosures, unswept decklid, and well-integrated dual exhaust ports. The overall aerodynamic efficiency has also been improved by 3% (approx.). Similar to the current model, the updated version will feature the struts upfront and a multilink rear suspension system. 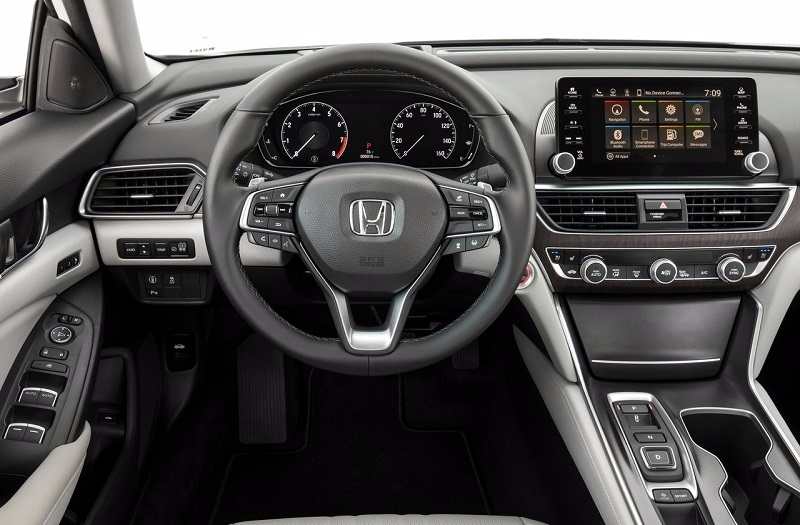 Based on new Honda Civic platform, the 10th generation Honda Accord will get fastback-like styling with most of the design elements borrowed from smaller sibling. It will continue to feature the same 2.0L + electric motor (hybrid powertrain).