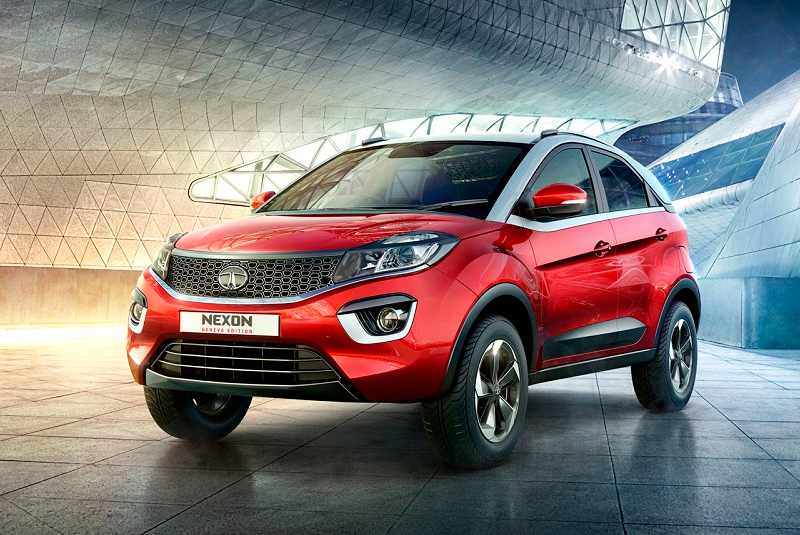 With the 1.2L turbo and 1.5L diesel engines, the Tata Nexon becomes the most powerful sub-compact SUV in India.

Tata Motors had launched the Tata Nexon compact SUV in the country in September 2017. The vehicle was launched at an introductory price of Rs 5.85 lakh that goes up to Rs 9.44 lakh (ex-showroom Delhi). This stylish SUV has been receiving an excellent response from car buyers, registering over 10,000 pre-orders in less than a month. It currently commands a waiting period of around 2-3 months. The Nexon carline is available in five variants – XE, XM, XT, XZ+ and XZ+ with dual-tone roof – in both petrol and diesel options with a standard manual transmission. The company will add an AMT version on later stage.

It is the fourth model after Tiago, Tigor and Hexa to feature Tata’s new IMPACT design philosophy. Additionally, Nexon will be the last model to be based on the company’s X1 platform. The exterior styling on the Nexon is sharp, bold and features several new elements such as the Ivory white accents on front fog lamps, side beltline and tailgate. The top-end XZ+ variant features projector headlights with daytime running lamps, while the rest has sporty 3D headlamps. It also has signature LED tail-lamps and 16-inch machine-cut alloy wheels. As standard, the SUV gets wheel arch cladding, signature front grille with chrome humanity line, body painted bumper, integrated rear spoiler and ORVMs with integrated blinkers. Read More – Tata Nexon Vs Honda WRV

Engine choices on the Tata Nexon carline include a 1.2-litre turbocharged Revotron petrol and a new 1.5-litre, Revotorq diesel. The Nexon diesel is currently the most powerful SUV in its league. Power is transmitted to the front wheels via a six-speed manual gearbox. Tata Nexon AMT version will be introduced at a later stage, most likely early next year. Read Comparison – Tata Nexon Vs Maruti Vitara Brezza

In tandem with other new Tata cars under the Impact design theme, the price positioning for Nexon is aggressive. The Nexon carline has been priced in the range of Rs 5.85 lakh and Rs 9.44 lakh. All the prices are ex-showroom, Delhi. One must note that the entry level variants miss out on prominent bits on the outside and inside, though it gets ABS, dual airbags and EBD as standard. At this pricing, Nexon undercuts arch rivals and this could very well work in its favour. One must note that the top players in the segment, Ford EcoSport and Maruti Vitara Brezza are currently available at Rs 7.21 lakh to Rs 10.82 lakh and Rs 7.21 lakh to Rs 9.91 lakh respectively.

Built on Tata’s X1 platform used in models like Zest and Bolt, the subcompact SUV features the new IMPACT design theme. It sports sharp looks on the outside which coupled with bold elements bestow a contemporary look. Insides are spacious and the upmarket material quality further adds to the comfort quotient. The SUV also features multiple storage points and brims with a host of comfort features. That said, it gets a bunch of first-in-segment features that give it cusp over rivals. With the Nexon, Tata Motors has made inroads into the sub four-meter SUV space that currently offers Ford EcoSport, Maruti Vitara Brezza, Mahindra TUV300, Mahindra NuvoSport and the likes. Photo Gallery: Upcoming Tata Cars in India

In terms of mileage, the new petrol and diesel units are estimated to return impressive fuel economy. The petrol-powered Nexon is claimed to return 17.88kmpl opposed to the diesel version delivers an impressive 23.97kmpl.

The Tata Nexon carline is being offered in petrol and diesel guise with a standard manual version. Though, the AMT variant of the compact SUV is scheduled to be launched in the first half of 2018. The gasoline version derives its power from a 1.2-litre Revotron turbocharged unit that produces 108bhp of power at 5,000rpm and 170Nm of torue between 2000rpm to 4000rpm. The oil burner is an all-new 1.5-litre Revotorq turbocharged unit that dishes out 108bhp of top power at 3,750rpm along with a ground-breaking torque of 260Nm between 1,500rpm to 2,750rpm. The diesel engine is basically a scaled-up version of the 1.05 Revotorq engine that powers Tiago and Tigor. Power is transmitted to the front wheels of the SUV via a six-speed manual gearbox.

It additionally comes with multiple drive modes with three options-Eco, City and Sport. For further details on the performance of both the engines you can watch our video review or go through the comprehensive first drive report.

Just like all new models from Tata Motors, Tata Nexon is also built on its new IMPACT design language. Sporting contemporary looks, new elements and styling bits, Nexon is one of the best-looking SUVs in the sub four-meter space. 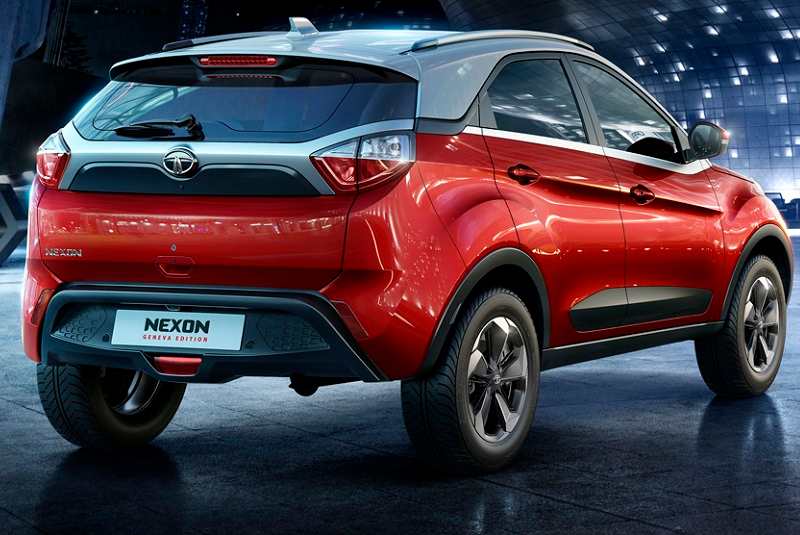 The Nexon is the fourth model based on Tata Motors’ new IMPACT design philosophy, which we have already seen on the Tigor, Tiago and Hexa. The front fascia is aggressive, featuring Tata’s signature Humanity line and the board honeycomb grille with piano finish injects a bold look.  The sharp projector headlamps with chrome bits and integrated D-cut LED units merge seamlessly into the grille. And the large air-dams on the lower bumper match with its broad profile, while the dual shade fog lamps on with ceramic white strip enhance its visual appeal.

What works well for the model is its proportioned look from the side, which gives it a cusp over rivals in the segment. Among the prominent bits, it receives pronounced wheel arches and 16-inch diamond cut alloy wheels wrapped around large profile tyres. Additional styling elements such as the ceramic strips, coupe-like roof make it look edgier.

Nexon features a unique rear design that makes it stand apart rivals. Though, the use of multiple elements at the back makes it a bit busy and it may not appeal to everyone. A thick ceramic band can also be seen around the windscreen. It additionally features black plastic with gloss finish and bumper matching the body colour. This altogether gives it a triple tone.

The subcompact SUV measures less than four meters in length. Sporting boastful dimensions, the model offers comfortable seat for five adults for occupants inside. This sub-4 meter SUV measures 3,994mm in length, 1,811mm in width and 1,607mm in height. It sits on a long wheelbase of 2,498mm, which in return offers a spacious cabin. The SUV has a class-leading ground clearance of 209mm that makes it perfect for the Indian roads. On the inside, it will feature a five-seat layout with 2+3 configuration. Despite being less than four meters in length, the subcompact SUV offers comfortable headroom, legroom and thigh support. At 350L, the luggage compartment offers generous space for storing luggage, in fact it is better than some of the models positioned a notch above Nexon. With the rear seats folded, the boot space can further be expanded to 690L, which makes it comfortable if travelling long distance. Read More About: Tata Q5 | Tata Tiago Aktiv | Tata Tiago Sport 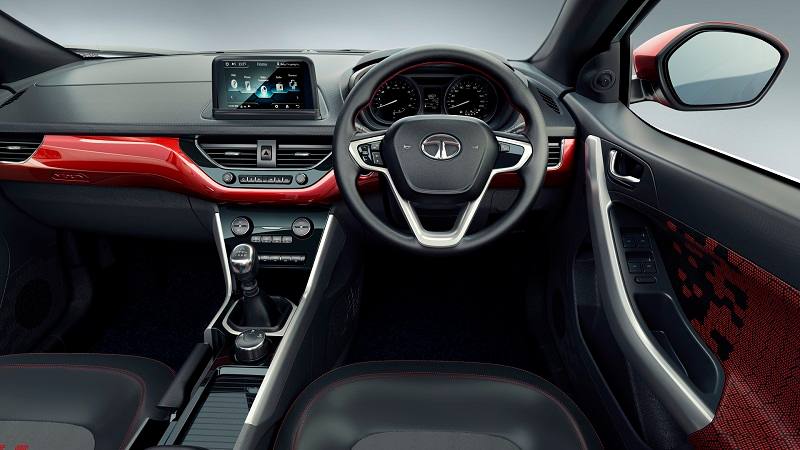 We have already driven Nexon and what really impressed us on the inside is the material quality which seems better than models in the higher segment. Use of plastic on the dashboard is superior, it is tough and has no rough edges. On the other hand, the contrast plastic with gloss finish on the lower dashboard and doors inject a premium look. Chrome bits on the door handles, buttons and air conditioner vents infuse premium touch.

Front seats are comfortable and offer decent legroom and kneeroom. The side support is good that helps holding the occupant well. Furthermore, the headroom is ample to accommodate people with 6-feet and above height, although thigh support could have been better. While rear has better thigh support and knee room. Since there is a centre arm rest at the rear, it is good for two adults and a kid. The view from inside is commanding and the steering wheel can also be adjusted for height.

The subcompact SUV as the name suggests measures less than four meter in length, albeit it offers generous space for storing luggage. With 350L of space, Nexon has the best-in-segment luggage compartment that can further be expanded to 690L by folding the rear seats completely.

Powered by the 1.2-litre petrol unit, slight lag can be experienced in petrol variants. The engine feels a bit underpowered until 2000rpm and requires shifting gear frequently in city. Power supply improves post 2000rpm on flat roads and it needs constant acceleration in hilly areas to keep the momentum. While the diesel engine is more impressive and it does not require frequent gear shifting unlike petrol unit.

The petrol unit supplies ample power until the 4500 mark across all gears. Mid-range is impressive and it hits 120km/h easily in third gear. Of all the driving modes, the Sport mode offers punchy performance. Diesel engine on the other hand offers great performance in low rpms and frequent gear shifting is not required. It is peppier and there is no lag. Gear ratios are better and power delivery is better too.

In the sub four-meter SUV space, the new model from Tata Motors will essentially field against Ford EcoSport and Maruti Vitara Brezza. Other models including the Mahindra TUV300 and Mahindra NuvoSport will also pit against Nexon.

Built on Tata’s new IMPACT design theme, Nexon is a bold SUV with sharp elements that makes it a head turner, though the rear styling is a bit busy and may not appeal to everyone. Interior is upmarket with superior material quality, multiple storage points, a bunch of comfort tech along with several-segment first bits. We drove the car and found the diesel engine impressive, though there is still some room for improvement in petrol unit. Prominent infotainment bits such as the 6.5-inch touchscreen and other bits are reserved for the top-spec variant, while the entry level XE misses out on some tech to keep pricing in check. Priced aggressively, Nexon checks off most of the right boxes and could turn out to be game changing model for Tata Motors in the highly contested segment. 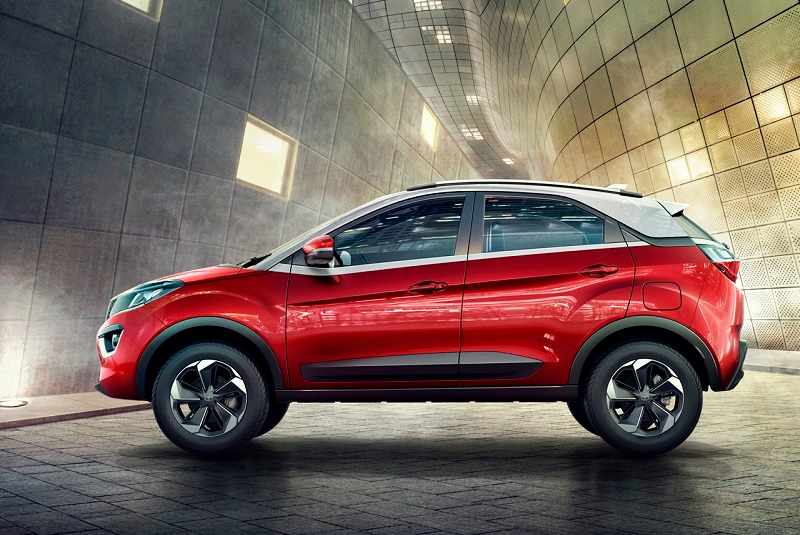 Multi Drive Modes – Tata Nexon will get plethora of features including some features that are absent in all other models in the segment like multiple driving modes with an option between-Eco, City and Sport modes. According to Tata Motors, every mode offers performance as per the requirement of the driver. While one can cruise the car smoothly in City mode, the Sport mode offers more spirited performance.

Floating Dashtop HD Touchscreen – In addition to the above feature, the SUV will also receive a floating dashtop with HD touchscreen. What makes it stand apart is that it is easy operation and the clarity offered by the HD touchscreen which reduces ‘eye-off read time”. This provides additional safety and offers a great overall user experience. 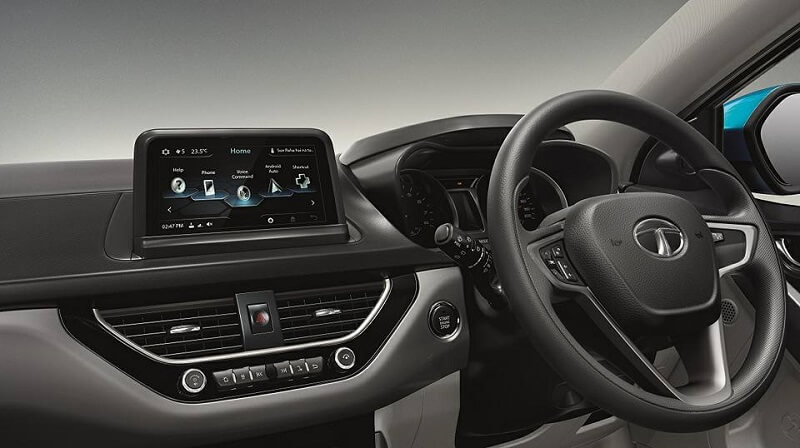 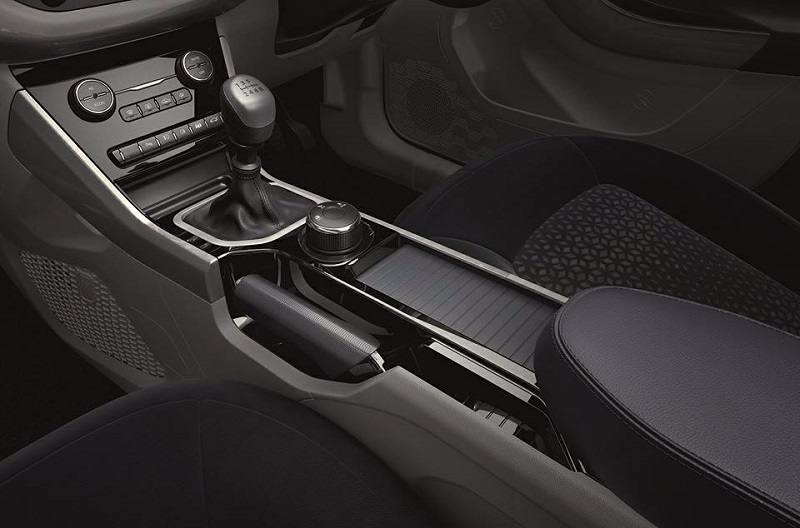 This is all what we have for now, stay tuned to IndiaCarNews for all the latest updates on Nexon.