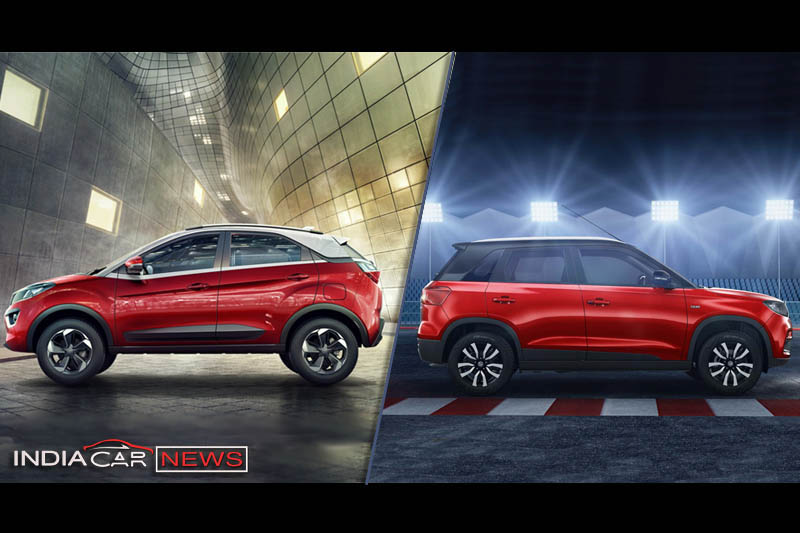 All good things come is a small package! This sounds apt for Maruti’s sub four-meter SUV, Vitara Brezza that has put the Indo-Japanese car giant on the top of its game in the highly competitive subcompact segment. While Ford EcoSport is another strong player in the space, Tata Motors has made inroads into the segment with Nexon. Built on Tata Motors’ IMPACT design language, the company is pinning hopes on the new model. The aggressively priced Nexon stacks up primarily against arch rivals Maruti Vitara Brezza & Ford EcoSport. In this spec-based comparison, we put it against Maruti’s credible model, Vitara Brezza that has achieved a benchmark in terms of sales. Check out Tata Nexon Vs Maruti Vitara Brezza price, specs, dimensions and features

-The subcompact SUV from Tata Motors is priced from Rs 5.85 lakh to Rs 9.44 lakh (ex-showroom, introductory prices).
-The Nexon carline is available in petrol and diesel fuel options with a standard manual transmission.
-An AMT unit will however be added to the line-up at a later stage, most likely by early 2018.

-Currently one of the best-selling models in the sub four-meter SUV space, Maruti Vitara Brezza is available only in diesel version.
-The Maruti Vitara Brezza range starts from Rs 7,23, 962 and the range topping ZDi Plus Dual Tone trim is priced at Rs 9,91,067 (all prices mentioned, ex-showroom, Delhi) 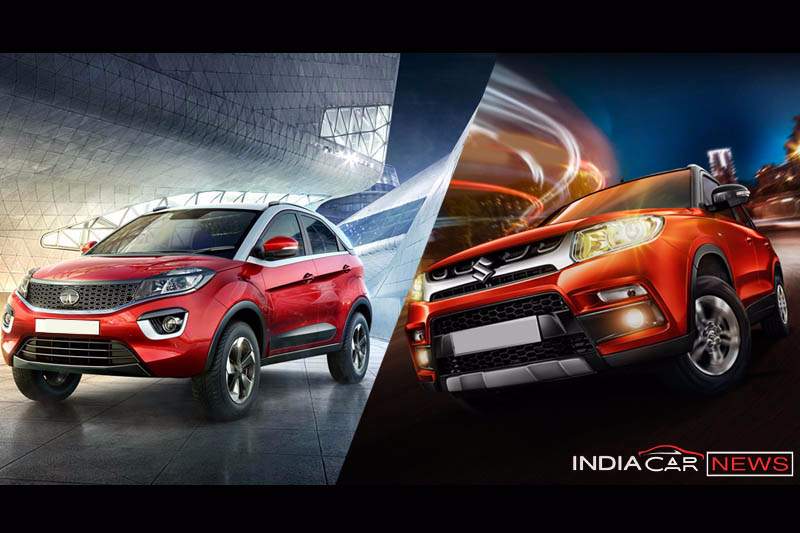 -Tata Nexon carline has been launched with 1.2-litre turbo petrol and 1.5-litre oil burner with 6-speed manual gerabox.
-The AMT unit is currently missing in the carline which could be introduced early next year.

-On the other hand, Maruti Vitara Brezza is currently available only with the 1.3-litre MJD diesel unit with a conventional 5-speed manual gearbox.
-Maruti will however add a 1.0-litre Boosterjet petrol engine to the line-up during festive season.
-The carline could get an AMT unit with the diesel engine or a CVT gearbox with the petrol unit. Read More – Tata Nexon Vs Ford EcoSport

-Tata Nexon line-up delivers around 18kmpl in petrol and 23kmpl in diesel version.
-Maruti Vitara Brezza, which is currently offered only with a diesel engine is claimed to return 24.3kmpl (ARAI figure).

–In terms of proportions, both have similar length, while Nexon is wider and Vitara Brezza is taller.
-As for the wheelbase, Maruti Vitara Brezza has 30mm longer wheelbase, which means slightly more room for occupants inside the cabin. Check Out Tata Nexon Exterior and Interior Pictures 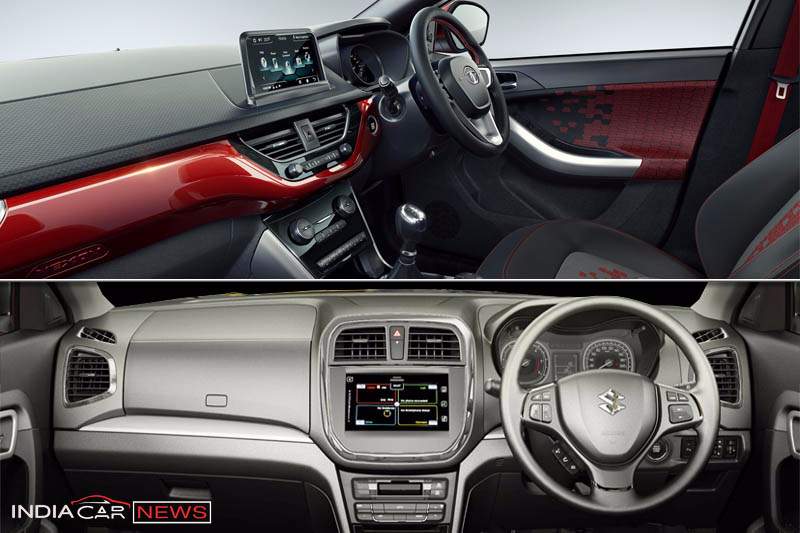 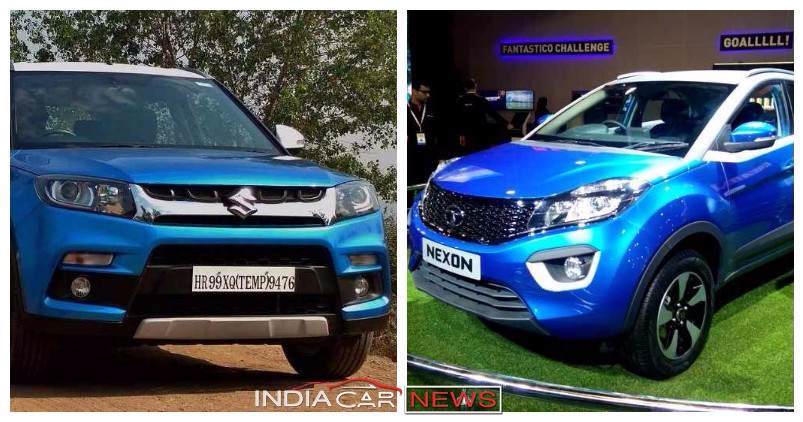 -The Maruti Vitara Brezza range features standard driver side airbag, whereas the co-passenger side airbags, ABS & EBD are missing in the LDi and VDi grades.
-The reverse parking camera is offered only on the range topping ZD+ variant.
-One must note that Maruti Vitara Brezza is India’s first vehicle certified for offset (AIS 098 at 56km/h) and side impact crash. The vehicle was tested at MSI’s R&D facility in Rohtak.

The Nexon is based on the modified X1 platform that also underpins the Zest compact sedan. The mini SUV features company’s signature design language. It comes equipped with piano black grille, projector headlamps, LED DRLs and upright bonnet. The vehicle features coupe-like profile, 16-inch alloy wheels, integrated spoiler, LED tail lamps and body coloured bumper. Inside the cabin, the Nexon looks similar to other Tata cars. The vehicle will have a wide range of comfort and connectivity features. Features like steering wheel, dashboard, front and rear design have directly lifted from Bolt and the Zest. The SUV will also get a new generation Harman infotainment system with freestanding touchscreen display on the dashboard. 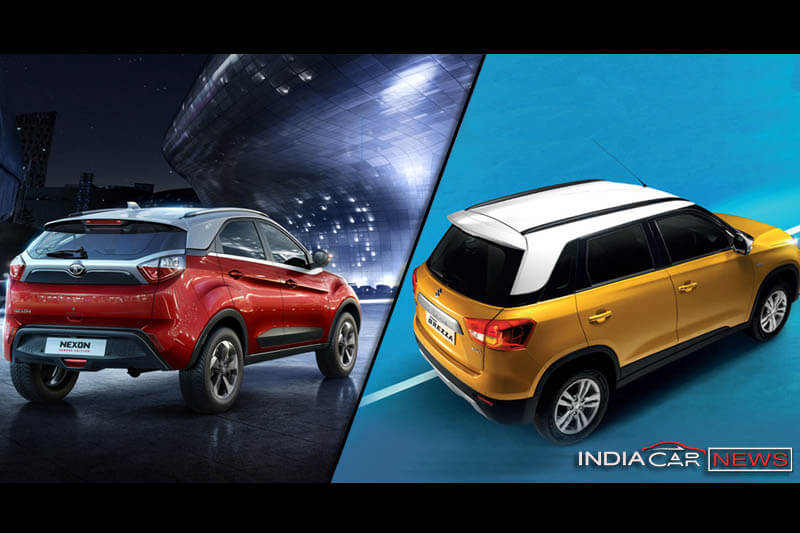