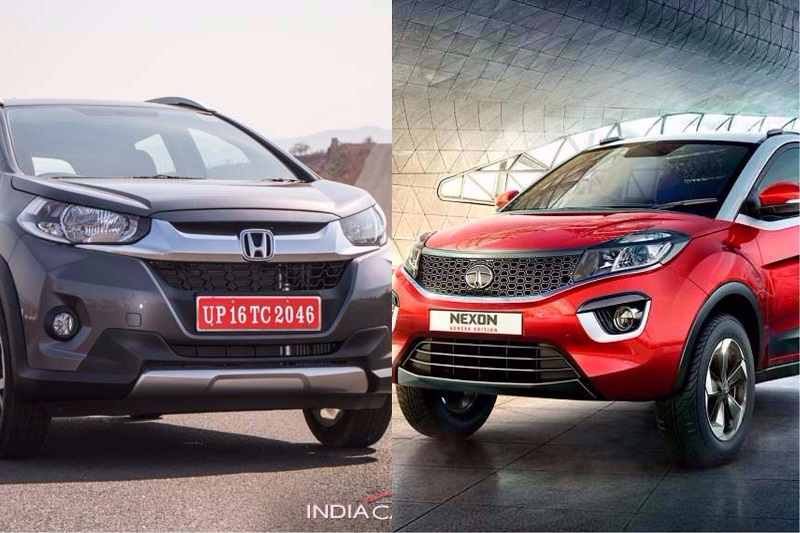 Here’s a concrete spec-based comparison between the upcoming Tata Nexon and Honda WR-V.

Tata Nexon has finally entered the Indian market with bang on pricing. Launched at an introductory price of Rs 5.85 lakh, Tata’s first-ever compact SUV undercuts all its rivals including the Honda WR-V. Designed on Tata’s new IMPACT design philosophy, the subcompact SUV created quite a stir for its unique design at the Delhi Auto Expo previous year.

The Honda WR-V is the one of the new arrivals in the fierce sub four-meter SUV space. While the SUV is quite popular among the customers, it remains to be seen if Tata Nexon will eat into the WR-V’s sales. To find out, we pit both the models against each other in a spec based comparison. Here’s a concrete Tata Nexon Vs Honda WRV comparison with details of features, specifications, mileage, dimensions etc.

– Price of the new Tata compact SUV ranges between Rs 8.85 lakh to Rs 9.44 lakh (ex-showroom, Delhi). At this price, the compact SUV beats all its rivals in the segment.

-The Honda WR-V range is offered in two variants-S and VX.

-The Tata Nexon comes with two powertrain options – a 1.2L Revotron and 1.5 Revotorq. Both motors produce a maximum power of 108bhp. The torque figures of the petrol and diesel unit stand at 170Nm and 260Nm respectively.

– The Nexon petrol and diesel models are available with a 6-speed manual gearbox.

-While WR-V comes in both petrol and diesel versions, the SUV misses out on the auto box.  The petrol unit is a 1.2L i-VTEC unit making 89bhp and 110Nm, and the diesel motor is a 1.5L i-DTEC generating 99bhp against 200Nm.

– The Nexon is more powerful than the WR-V. Read More – Tata Nexon Vs Maruti Vitara Brezza

-The upcoming Tata Nexon returns a mileage around 18kmpl with petrol unit and 23kmpl with diesel motor.

– The Honda WR-V is the most fuel efficient sub-compact SUV in the country. The vehicle delivers a claimed fuel economy of 17.5kmpl in petrol and 25.5kmpl in diesel version.

-It additionally gets a drive mode controller-a first-in-segment feature, which is essentially a small button that allows choosing between the three-modes-Eco, City and Sport.

-One must note that change in the drive mode controller also affects the ABS and traction control settings.

-Features such as automatic climate control with touch control panel & front centre armrest with storage console are specific to top-spec variants. While one push start/stop button and Honda smart key system with keyless remote is available only on top-spec diesel variants.

-Honda WR-V, on the other hand, is loaded with several standard fitments save for multi-view rear camera with guidelines and driver side window one touch up that are restricted to the range topping variant.

-The carline also gets a day/night rear view mirror without auto dimming function.