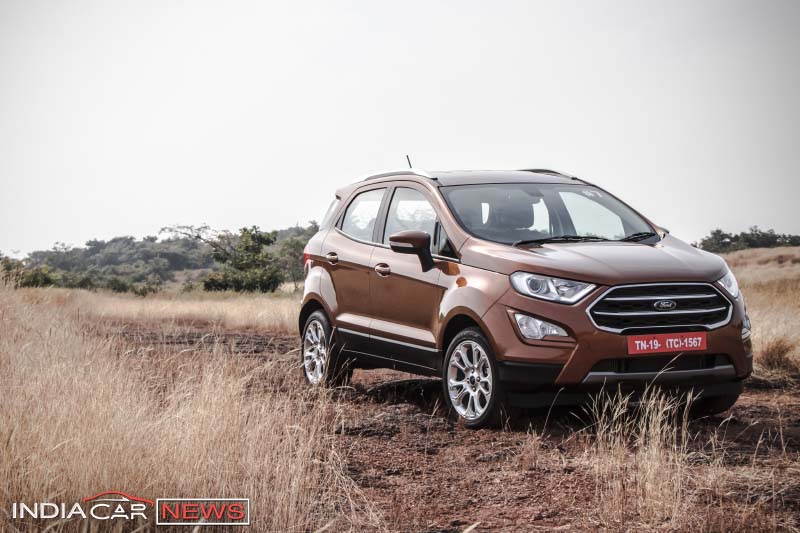 – The SUV comes with a new 1.5-litre, 3-cylinder Ti-VCT petrol engine, which is claimed to be 7% more fuel efficient than the old Sigma unit.

American automaker, Ford had launched the thoroughly updated Ford EcoSport facelift in the Indian market in November, 2017. Interestingly, the Ford EcoSport 2018 model has now received an update to its equipment list. It is now available with features like rear parking sensors, speed-sensing automatic door locks and a passenger seatbelt reminder as standard across all trims. Besides, the Trend variant is now equipped with reversing camera as well. Except base Ambiente, all the variants of the EcoSport facelift gets a large 9.0-inch touchscreen infotainment system.

Features like ambient lighting and the MyKey function are only restricted to the top-spec EcoSport Titanium+ variant. Earlier, these features were offered with the Titanium variant. Due to addition of new features, the Ford EcoSport 2018 also gets slightly more expensive. The updated model is priced in the range of Rs 7.82 and Rs 11.35 lakh, while previously it costs between Rs 7.77 lakh and Rs 11.30 lakh (ex-showroom, Delhi).

For 2018 model, the Ford EcoSport received significant design updates along with several segment leading features and an all-new petrol engine. Redesigned with around 1600 new parts, the SUV continues to lock horns against the Maruti Vitara Brezza, Tata Nexon and Mahindra TUV300 . For people not in the known, Ford had launched a new top-spec Titanium+ petrol manual variant in the EcoSport lineup in March, 2018. This model was priced at Rs 10.47 lakh; however, the vehicle now costs Rs 10.52 lakh.

The 2018 Ford EcoSport price in India starts from Rs 7.82 lakh for the entry-level Ambiente MT petrol variant, and goes up to Rs 11.35 lakh for the range-topping Titanium+ AT petrol model. The prices of the diesel models’ fall between Rs 8.41 lakh – Rs 11.04 lakh. One must note that aforementioned prices are ex-showroom, Delhi. Check Out: New Ford EcoSport ST-Line Pictures & Details

Keeping its commitment of ‘Making in India, for India and the world’, Ford is producing the new 1.5L petrol engine at its Sanand-based facility in Gujarat. It has certainly helped the company achieve such aggressive pricing. 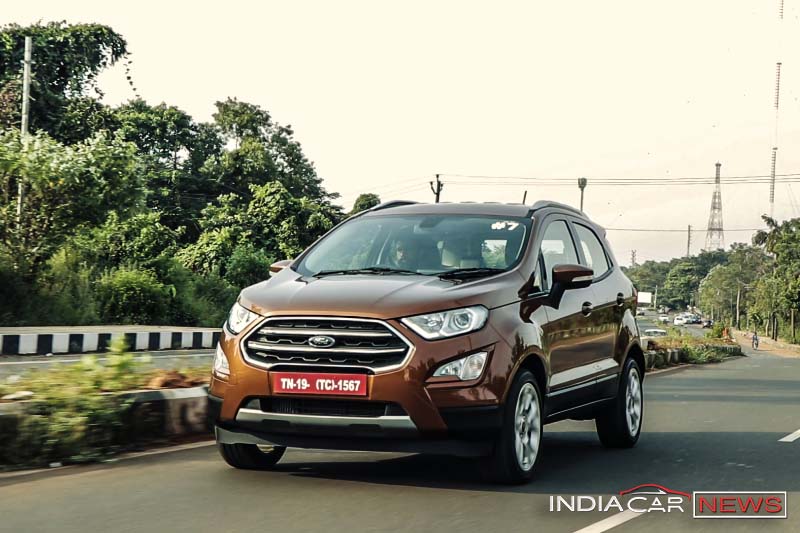 Visually, the facelifted EcoSport appears more refreshing and sportier than the old model – thanks to copious design and styling updates. It’s the face of the 2018 Ford EcoSport facelift that witnessed maximum changes including a new hexagonal single-piece trapezoidal grille with silver finish looks similar to the Endeavour SUV. The SUV also gets bigger and wider projector headlamps with LED DRLs (daytime running lights). The bold fog lamps further compliment the edgier and aggressive face of the car. The bonnet has a wider central dome adding more to its muscular appearance.

Changes you will notice on the side profile are the redesigned alloy wheels and roof rails. The shoulder lines, bold creases and other design bits remain unchanged. Ditching the 16-inch wheels, the high-spec Titanium+ trim now gets the bigger 17-inch units that are claimed to offer better control. The car received subtle updates at the rear end. It sports the new LED taillamps and new tailgate mounted spare wheel cover. Dimensionally, the 2018 Ford EcoSport remains unchanged. Ford’s design and engineering team comprehensively worked on refining aerodynamics of the car, as claimed by the carmaker. Read – Tata Nexon Vs Ford EcoSport 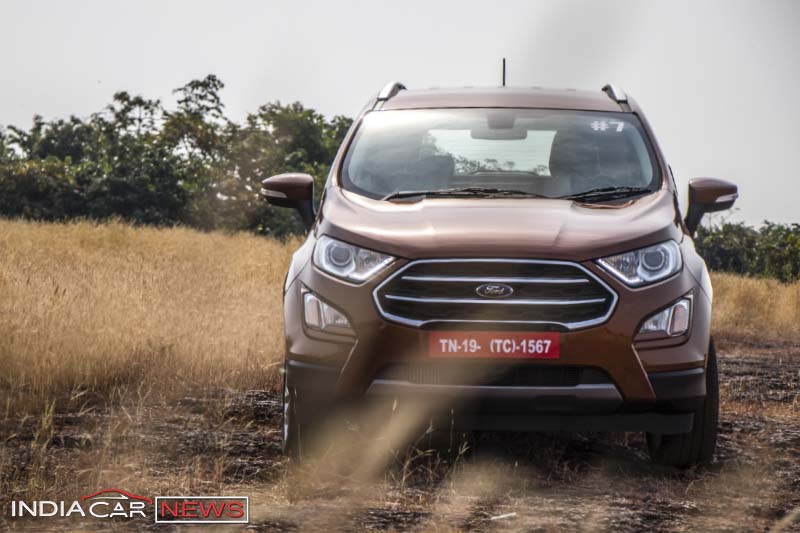 Similar to the old model, the 2018 Ford EcoSport comes in a choice of six exterior colour options which include Canyon Ridge, Diamond White, Moondust Silver, Race Red, Absolute Black and Smoke Grey. In addition, Ford also introduced a new Lighting Blue paint scheme on the compact SUV. Read: New EcoSport Vs Old – What is the difference?

Besides comprehensive design and styling updates, the 2018 EcoSport comes with an additional pack comprising new comfort and connectivity bits. The updated model not only retained most of the features from the old model, but shares some of its components with other Ford vehicles such as Ford Kuga and Ford Edge crossovers as well. The new dashboard design along with a newly laid out centre console instantly draw attention as you get inside the cabin. The most prominent change comes in the form of a new SYNC 3 infotainment system, which is compatible to Apple CarPlay and Android Auto connectivity. It also supports navigation system, voice recognition and applications. This in-car connectivity system allows drivers to adjust climate setting and connect his/her smartphone via voice commands.

The high quality 675-watt, 10-speaker audio system with B&OPLAY-branded tweeters and woofers at front doors and a subwoofer at the back takes care of your entertainment. The car also gets new switchgear and grab rail. The 12V power outlet is available both in front and rear along with two fast-charging USB ports on centre and 110-volt-outlet which are placed behind the centre console. Other bits such as a new three-spoke steering wheel, dashboard and centre console with horizontal centre HVAC vents are also packed inside. Features such as cruise control, a rear-view camera, automatic climate control and a speed limiter function are also on offer. Ford is also offering range accessories with the SUV that includes illuminated scuff plates, slimeline weathershield, sun blinds, rear seat entertainment system, spare wheel cover, roof cross bars, seat cover options, rear spoiler and SS scuff plates.

Comprehensive updates have been made under the hood as well. The 2018 Ford EcoSport facelift’s engine setup includes an all-new 1.5-litre, three-cylinder Ti-VCT petrol and the tried and tested 1.5-litre TDCi diesel units. The new three-cylinder petrol powertrain is an all-aluminium block, which makes it lighter. It features timing belt in oil for reduced wear & tear and integrated exhaust manifold for lower NVH (Noise Vibration Harshness). Additionally, the each intake and exhaust cam of the motor works independently that not only improves its throttle response, but enhances its fuel efficiency as well. Ford claims that the new naturally aspirated engine delivers faster throttle response and 7% better fuel efficiency than its replacement. NVH levels and friction have also been reduced significantly. In fact, the company has optimised its bore and stroke ratio for achieving higher torque figures.

The EcoSport’s new petrol engine churns out a maximum power output of 121.3bhp at 6,500rpm and a peak torque of 150Nm at 4,500rpm. This makes it 13bhp more powerful and 10Nm torquier than the old 1.5-litre, 4-cylinder petrol unit. Interestingly, the new EcoSport 1.5L petrol is also the most powerful car in its segment. Read About – New Ford Figo Hatchback

On the other side, the diesel engine develops a top power of 99bhp and 205Nm of torque. The company has tuned the oil burner for better fuel efficiency. Transmission options on the carline include a 5-speed manual and a new 6-speed automatic unit instead of powershift dual-clutch gearbox. The latter one comes with paddle shifters, which are segment-first. The Independent McPherson front and semi independent rear suspension units ensure a comfortable drive even on rough roads. 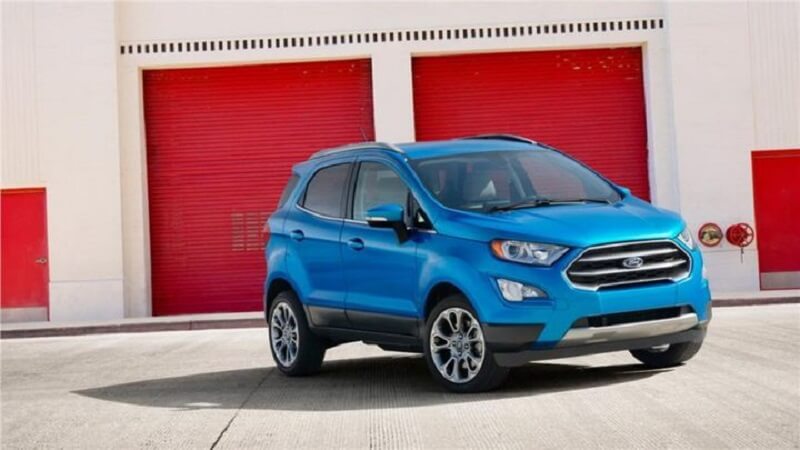 The 2018 Ford EcoSport comes equipped with the brand’s Sync 3 infotainment system allows you play music, make phone calls, change climate settings and other functions through voice commands. This latest edition of the in-car connectivity system also supports Android Auto and Apple CarPlay. With its voice command feature, you can also access a range of smartphone apps including AccuWeather & Pparke, Hungama Drive, Maps by MapMyIndia and InShorts.

The 2018 Ford EcoSport facelift features an 8-inch floating touchscreen that also works as a display for the rear view camera. A new climate control system with a digital display and two rotary control knobs is placed just below the screen. The mid-range variant comes with a smaller 6.5-inch touchscreen display. There are two USB inputs with backlit surrounds. Features such as automatic headlamps and rain-sensing wipers further enhance its comfort quotient. The EcoSport Ambiente, Trend and Trend+ trims come with full fabric seats, while the Titanium and Titanium+ trims get high series fabric and premium leather seats respectively. The leather gear shift knob and steering wheel are also restricted to the top-spec trims.

The 2018 Ford EcoSport gets a centrally located media bin with two illuminated USB ports. It can stow a smartphone (as large as iPhone 7 Plus) while charging. Besides media bin, the SUV also offers other 24 storage compartments. The SUV offers a boot space of 352-litres, which is expandable up to 1178-liters. It has an adjustable floorboard (first-in-class) that can be mounted on two designed slots to create different compartments. Read – First Spy Pictures of 2018 Ford Endeavour Are Out

Besides this, the SUV offers a quieter cabin to sit in. The multiple storage compartments and foldable seats make it more practical car for family buyers. Ford claims that the new EcoSport is a more fun-to-drive machine with improved fuel efficiency and reduced friction. With all these attributes, the 2018 Ford EcoSport facelift is surely much better product than its predecessor.

The 2017 Ford EcoSport facelift receives significant styling changes along with a new 1.5-litre, 3-cylinder petrol engine. This makes it the most powerful car in its category.