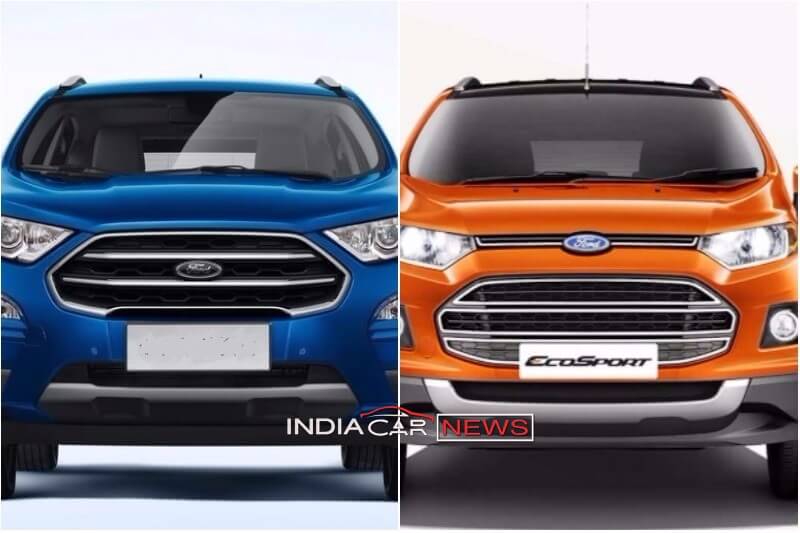 Ford India has launched EcoSport’sfirst mid-life facelift that now gets an all-new petrol engine along with other additional bits. The SUV was first introduced in India in 2013 and though it did not face much competition back then, the scenario has changed over the years with new entrants claiming a huge chunk of the market. Changes on the EcoSport facelift include aesthetic updates to the exterior and interior, Ford’s new SYNC 3 infotainment system, a new petrol unit from Ford’s Dragon family of engines and a more comfortable cabin. With these changes, the new EcoSport has become a better offering and to find out what additional features it offers over its predecessor, we bring you a detailed spec-based comparison between the new and pre-facelift model.

-Ford has incorporated over 1600 changes to the new EcoSport.

-One must note that the outgoing version was offered with the ousted 1.5-litre petrol and 1.0-litre EcoBoost engine.

-The 1.5-litre TDI oil burner has been retained from the predecessor. Read – Ford EcoSport Vs Honda WR-V

-The 123bhp, 1.0L EcoBoost petrol unit has been discontinued owing to lukewarm sales, whereas the 1.5-litre TDI oil burner has been retained.

-Transmission options have been carried out from the preceding model and the new EcoSport gets a standard 5-speed manual and an optional 6-speed AT gearbox on select petrol trims. Read – Tata Nexon Vs Ford EcoSport Comparison

-The oldFord EcoSport was available with one diesel and two petrol engines.

-The petrol variants were offered with a choice between a 110bhp, 1.5L and 1.0L EcoBoost unit with 123bhp of top power.

-Diesel variants in the pre-facelift version derived power from the same 99bhp, 1.5-litre TDI unit that are used in the current model.

-The diesel variants continue to propel on the same 1.5-litre TDI oil burner and return 23km/l.

-The 1.5-litre, four-cylinder petrol engine used in the previous model was rated at 15.63km/l, whereas Ford’s 1.0-litre EcoBoost unit (that has now been dropped) returned 18.88km/l.

-In terms of dimensions, the EcoSport facelift remains unchanged.

-It has therefore retained same proportions from the current model, like length, height, width and wheelbase.

-The luggage storage space has been extended to 352L that can further be expanded to 1178L.

-One of the most prominent changes on the new EcoSport is Ford’s SYNC 3 infotainment system with Apple CarPlay and Android Auto.

-The system also supportsnavigation, voice recognition and other apps.

-The higher trims come with a large 8.0-inch touchscreen system, whereas the lower variants feature a smaller 6.5-inch display.

-Ford has also added a new automatic climate control to the facelift.

-Features such as power windows, manual AC with heater, power-operated ORVMs with turn indicators and adjustable tilt& telescopic steering wheel were standard on the predecessor.

-Ford’s SYNC AppLink with voice control was restricted to the Titanium AT trim and the colour touchscreen with multi display came only with the Titanium and Titanium+ variants.

-Smartphone connectivity features like Apple CarPlay and Android Auto were missing in the current model.

-Prominent tech such as automatic headlamps and rain-sensing wipers come only with the top-end Titanium+ grade.

-The dual front airbags were standard across line-up.

-Side & curtain airbags came only with the Titanium AT and Titanium+ variants.

-Prominent safety features such as EBA, ESC, TCS and HLA were available only with the Titanium AT trim.

-While reverse parking camera was specific to the Titanium and Titanium+ trims.

-The SUV was crash tested by EURO NCAP & Latin NCAP (for South America), where it scored 4 stars and 5 stars respectively.