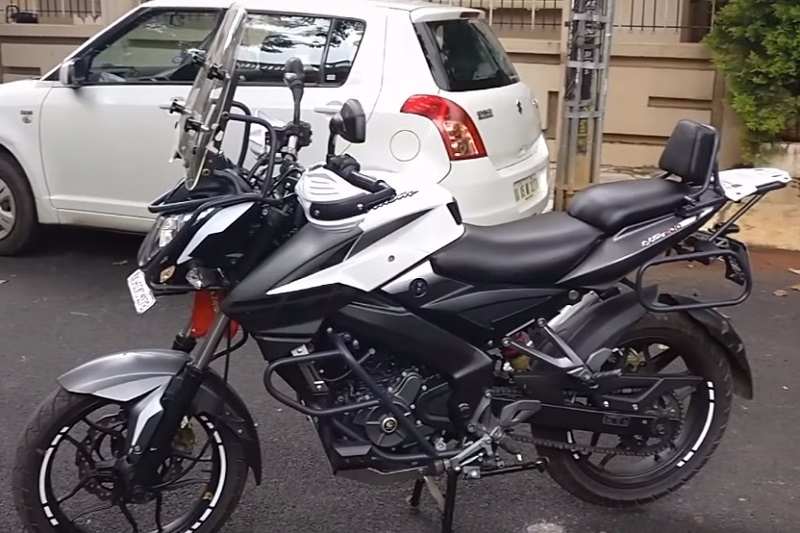 Meet this beautifully modified Pulsar NS200, which now looks like a Triumph Tiger 800.

In recent times, demand and culture for touring and long riding have increased. However, India is yet to get such dual-purpose bikes that offer such capabilities. In affordable segment, there are very limited options to buyers. While automakers are planning to launch tourers in India in the next couple of years, few riders have started experimenting with their existing motorcycles. One such example is this beautifully modified Pulsar NS200, which now looks like a Triumph Tiger 800. Also Read – Top 5 Best Modified Bajaj Pulsars

The modified Pulsar 200 NS receives several changes, which makes it look bigger than the original bike. All the accessories added in the motorcycle has been custom made, and has been developed by MS Roads. These accessories are claimed to be quite sturdy and lightweight.

It is equipped with an adjustable windscreen to prevent rider from windblast at high speeds on highways, while the handlebar has been sourced from the KTM 390 Duke. This handlebar is wider and offers a more upright and relaxed riding position. In fact, the front footpegs have also been adjusted to give a more relaxed ride experience. The stock front suspensions have been modified to offer more travel, which makes easier to ride it through rugged roads. Additionally, the engine has been covered with a crash guard to prevent it from bad roads during off-roading. Also See – Best Modified Royal Enfield Classics In India

Other touring centric features include headlamp cage with MS roads, luggage pannier, a rear mount for top box, backrest for the pillion, etc. It also gets a custom exhaust that sounds pretty good and heavy. Powering the motorcycle is a liquid-cooled 199.5cc engine producing 23.17bhp of power and 18.3Nm of torque. The new added equipment has increased the weight of this bike by around 8-9kgs.