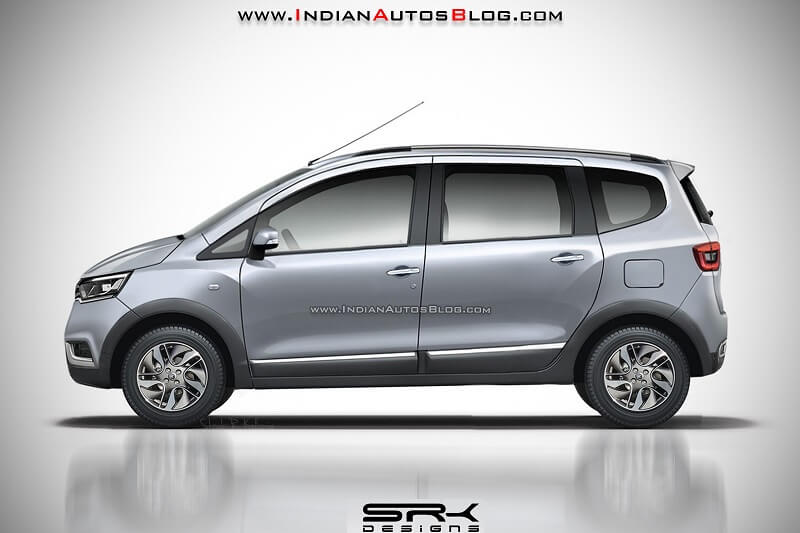 In company’s product lineup, the Renault RBC MPV will sit below the Lodgy.

Renault, the French carmaker, had confirmed that it will expand its Indian product lineup with four new models in coming years. All new models will be based on the Kwid hatchback including an electric hatchback, a compact sedan, a compact SUV and a compact MPV. Codenamed RBC, the new Renault MPV will be the first among them to see a release in the country. The company had dropped a teaser picture of the car revealing its exterior silhouette. Currently, the new Renault RBC MPV from the French carmaker is in its testing phase and likely to hit showrooms sometime in 2019. Read – New Renault Kwid Facelift Launch Details Revealed

Reports suggest that new Renault 7 seater MPV might enter into production in the second half of 2019, followed by its launch. One must note that there is no official word about its India launch timeline. The Renault RBC will be the second offering from the French carmaker in the MPV segment, first is the Renault Lodgy. This new MPV might share some its design elements with the Renault Captur. Pictures – Renault Kwid Electric K-ZE Concept

Sumit Sawhney, MD, Renault India, had confirmed earlier, “We will be working on segments where we are not present. We will try to bring in a lot of innovation in order to make them the game-changer in the segment and redefine it or create a sub-segment out of it.”

The all-new Renault RBC MPV will be sub-4 metre in length that means it will avail excise duty benefits. Furthermore, it will be based on the brand’s low-cost platform and share most of its components with the Captur crossover. This will reduce the total manufacturing cost of the car, and enable the carmaker achieve aggressive pricing. In India, the new Renault 7 seater MPV will take head-to-head against the Datsun GO+ and the newly-launched 2018 Maruti Suzuki Ertiga. Prices of the vehicle are likely to start from Rs 4.5 lakh for the entry-level model, and go up to Rs 7 lakh for the range-topping variant.

Renault has confirmed that its new multi utility vehicle (MPV) will be sub-4 meter in length. While there is no design details have been revealed yet, a digital rendering gives an idea about its final production design and styling. Face of the Renault RBC might derive its design inspiration from Renault Secenic and Espace MPVs, which are currently on sale in the European markets. Read – Renault SUV-Coupe Based on Duster’s platform In The Works

Elements such as the front grill design, headlamps and tail lamps could be carried over from its European siblings. It will have short overhangs at the front and rear and pronounced wheel arches. The new Renault 7 seater MPV (RBC) will be based on the low-cost CMF-A platform that also underpins the Kwid hatchback. Though, it will have a longer wheelbase than its hatch sibling. In fact, the Renault RBC might also be larger than its arch rival – Maruti Suzuki Ertiga. 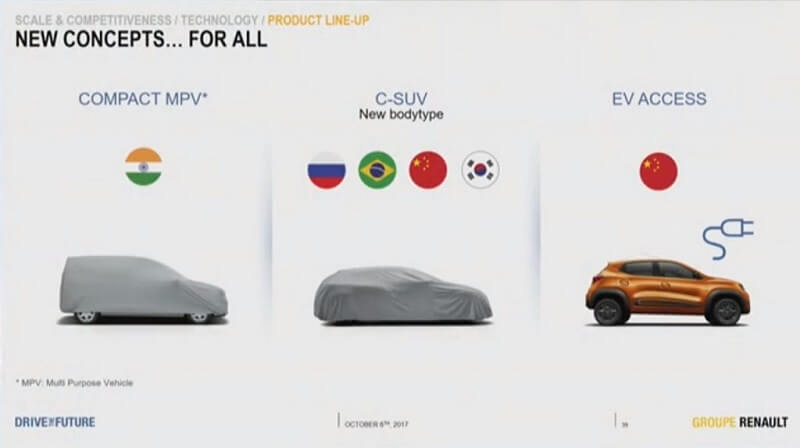 Interior details of the new Renault 7 seater MPV are yet to be revealed. Speculations are on rife that it might share some of its features with the Captur crossover such as the infotainment system with touchscreen display and smartphone integration, 3-spoke multifunction steering wheel, digital speedometer, etc. Renault revealed that this new car will have 7-seats layout. Sitting on a longer wheelbase, the Renault RBC will ensure enough cabin space for occupants. Read: New Generation Renault Duster – 6 Things To Know

Renault’s new 7 seater MPV is likely to be offered with both petrol and diesel engine options. The MPV might share its powertrains with the Scala sedan, which was discontinued in 2017 due to poor sales. The saloon was available with a 1.5-litre petrol and a 1.5-litre K9K diesel engine generation power worth 105bhp and 84bhp respectively. Transmission on offer might include a 5-speed manual and a 5-speed AMT. Read – Renault Kwid Based Compact SUV Might Look Like This

We can’t comment on the mileage figures of the MPV, as official engine details are yet to be revealed.

Renault’s 7 seater MPV is likely to get fabric seat upholstery as standard, while the top-spec trim might come with leather covering. With a long wheelbase, the car is likely to offer decent cabin space. Though, it will all depend on the packaging. Read – Renault Kwid Based Compact SUV, Hatchback Are Coming To India

Despite being sub-4 meter in length, this new Renault RBC will have enough space to accommodate seven passengers. However, the third row seats’ occupants might short with legroom. The boot space could also be limited, though you will have option to expand it by folding rear seats. It might also offer multiple storage space including glove box, bottle holders, cup holders etc.

In order to tap the entry-level MPV segment, Renault might come up with aggressive pricing. It is expected that this new MPV will take some of its design bits from the Renault Scenic and Espace. So, we can expect to it carry modern looks. Besides this, the MPV’s well-packed cabin with 7-seats layout will further attract mass buyers.