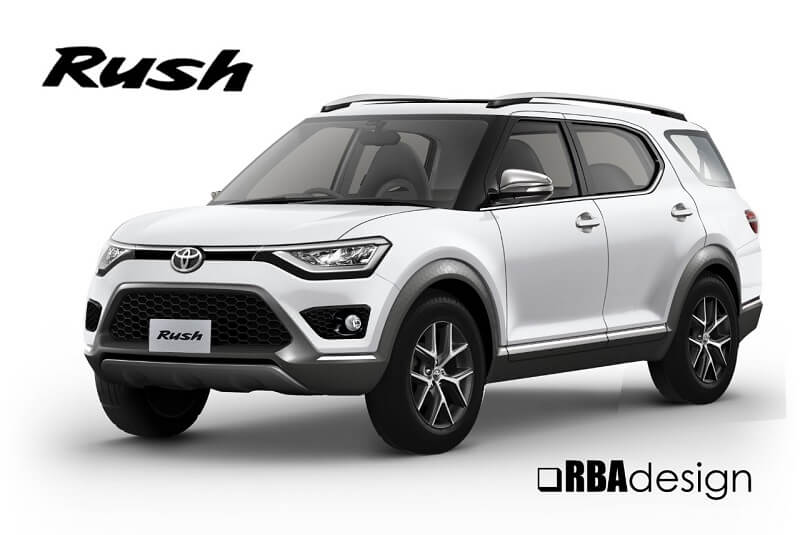 Likely to take design inspiration from Daihatsu DN TREC Concept, the next generation Toyota Rush could come in both 5 and 7-seat versions

Toyota, the Japanese automaker is working on the next-generation Toyota Rush compact SUV, which is likely to be launched in the Indonesian market in 2018. Toyota’s low-cost brand- Daihatsu has recently revealed the DN TREC compact SUV concept, which is also likely to enter into production form. Indonesian-based RBA Design has released a digital rendering of the 2018 Toyota Rush, which previews its expected styling. Also See – Upcoming Toyota Cars In India

As a reminder, the current generation Toyota Rush is based on Daihatsu Be-go, which was launched in 2015. Toyota had launched the Rush SUV in 2006, which eventually discontinued from Japanese market in 2016. The rendering of the next-gen Rush takes inspiration from the Daihatsu DN TREC concept. In fact, it looks like a longer version of the DN TREC. There are chrome treatment around the grille, regular fog lamps, smaller wheels and differently styled outside rear view mirrors. Also Read – Toyota Fortuner 2018 – All You Need To Know

It is expected that the second generation Toyota Rush will also come in two versions – standard 5 seater and long-wheelbase version with 7 seat layout. It is expected that Toyota could launch the 7-seat version of the SUV at emerging markets such as Indonesia and Malaysia. The outgoing model is powered by the 3SZ-VE 1.5-litre VVT-i engine that churns out a maximum power output of 109PS and a peak torque of 141Nm. Transmission duties include 4-speed manual and 5-speed automatic. Power is transmitted to the rear wheels or all four wheels.