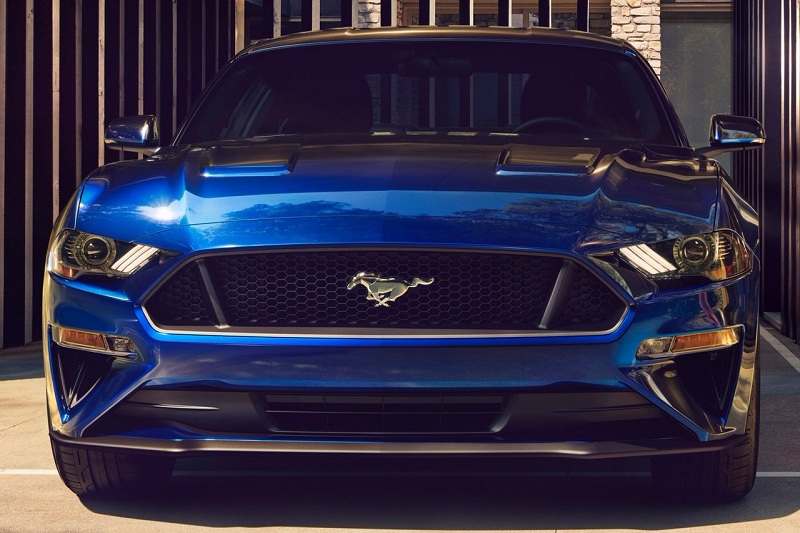 – 2018 Ford Mustang facelift is reported to launch early next year.

– The pony tail is estimated to be priced around Rs 75 lakh (ex-showroom).

Ford’s iconic pony tail – Mustang entered India (RHD – right hand drive) in July, 2016. And in no time, it became the most sold sportscar in the country, showcasing the kind of fan following it has around this side of the world too. Now, the carmaker is ready to give it a mid-life facelift by early next year. Right a year after its global debut at the 2017 North American International Auto Show, the muscle car has arrived in India. The 2018 Ford Mustang was spotted at a dealership yard early this year. Read About – 2018 Ford Figo | 2018 Ford Aspire 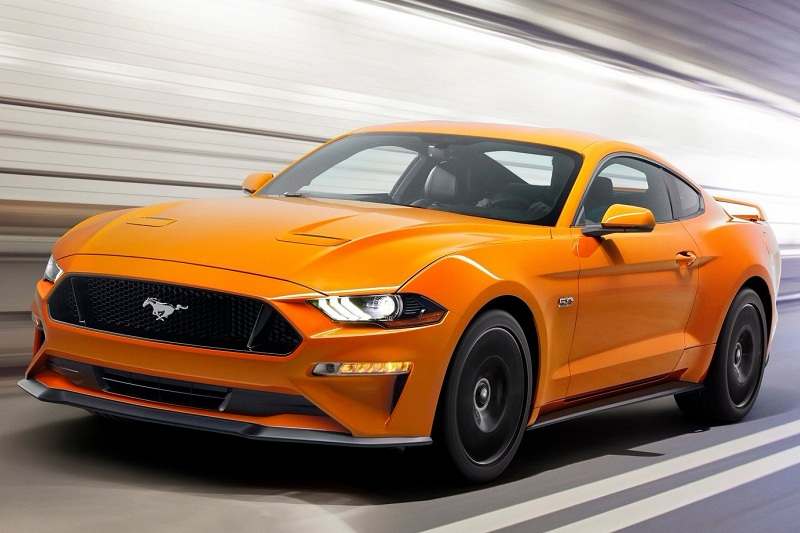 Ford has already launched the updated Mustang in the U.S. market. As for its India launch, no official word has been made by the carmaker. According to a fresh report, the pony tail will see a release early next year. Check Out – Upcoming Ford Cars in India

The Mustang sportscar is currently available at a starting price of Rs 74.62 lakh (ex-showroom, Delhi), the facelifted model will be slightly more expensive than the former. Ford claims that the new Mustang receives “new technology and design changes” along with “better performance from more powerful engines and new MagneRide suspension technology”. With these new attributes, the 2018 Ford Mustang price in India is estimated to be around Rs 75 lakh (ex-showroom). Read – New Ford Premium Hatchback Under Development 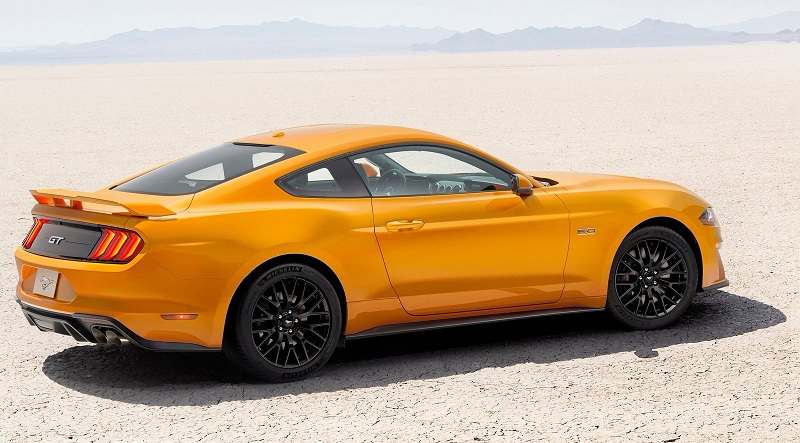 The American carmaker has made comprehensive design and styling changes to the 2018 Ford Mustang facelift. While the original shape and dimensions remain intact, the pony tail gets more refined aerodynamics and athletic stance giving it a leaner look. For the first time, Ford introduces all LED front lights on the Mustang lineup including projector high beams, signature lighting, turn signals, fog lamps and low beams. It gets wider and more prominent fenders.

The carmaker has assembled the updated model with the new 19-inch forged alloy wheels available in multiple designs and finishes (including Polished, Ebony Black and Nickel). The rear profile of the sportscar has also been revised with the new LED taillamps, revised bumper and quad-tip exhaust instead of dual tip unit. Besides this, the Mustang facelift gets a new signature Orange Fury colour scheme along with Royal Crimson and Kona Blue exterior shades. Check Out – India’s Top 5 Best Modified Ford EcoSport 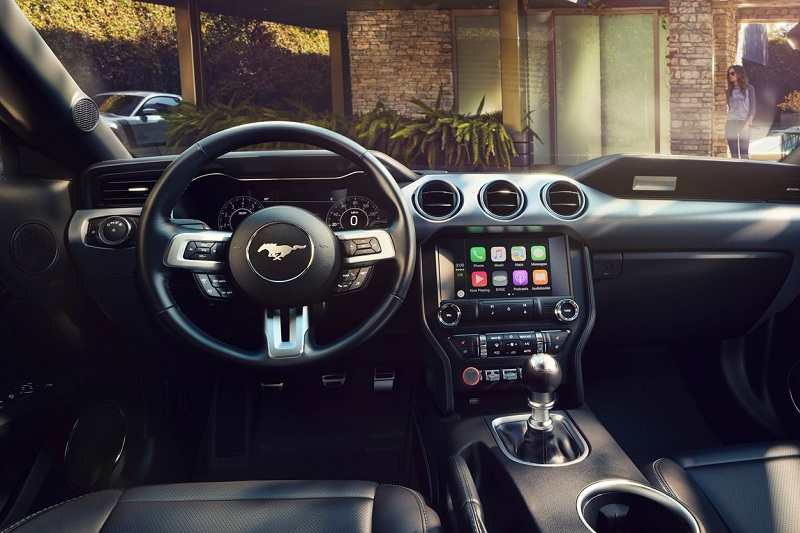 The improved visual cues and touch points enhance premium feel and appeal of its interior. On the center console, you will notice a new hand-stitched wraps with contrast stitching and padded knee bolsters. The door handles, rings and bezels have aluminium finish. There is an updated Mustang badge on the instrument panel along with a new key fob design. One of the prominent changes come in the form of Ford’s first 12-inch all-digital LCD display integrated in the dashboard. The 2018 Mustang facelift also gets revised seating surfaces with multiple new patterns and colour options. It also features an optional heated steering wheel. 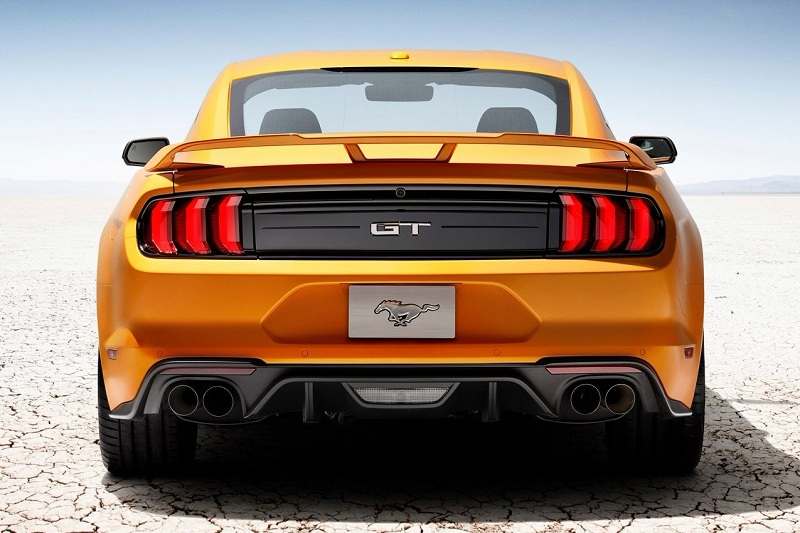 Ford will introduce the range-topping 2018 Mustang GT model in the Indian market. For power, the updated version of the pony tail will use the same 5.0-litre V8 Ti-VCT V Type engine. On the pre-facelift, this motor churns out a top power of 395bhp while producing a peak torque of 515Nm. This powertrain, paired to a 6-speed automatic transmission, can attain a top speed of 250kmph.

On the other hand, the Euro-spec model derives its power from the 5.0-litre Ti-VCT that’s good enough for 443.8bhp and 527Nm of torque. This makes it 33.5bhp (34PS) more powerful than previous model, while the torque has been reduced by 3Nm. Ditching the 6-speed automatic gearbox, the 2018 Euro-spec Mustang gets a 10-speed automatic transmission. Read – New Ford Endeavour Revealed In New Pictures

Besides updating the powertrain, Ford has tuned its suspension system for better cornering stability. Its new MagneRide suspension technology optimizes ride and handling in the different terrains. Though, it comes as a new option with the Mustang Performance Package. The pony tail gets new shock absorbers and a new cross axis joint in the rear suspension. Features such as Active Valve Performance Exhaust technology and thicker anti-roll bars further enhance its driving dynamics.