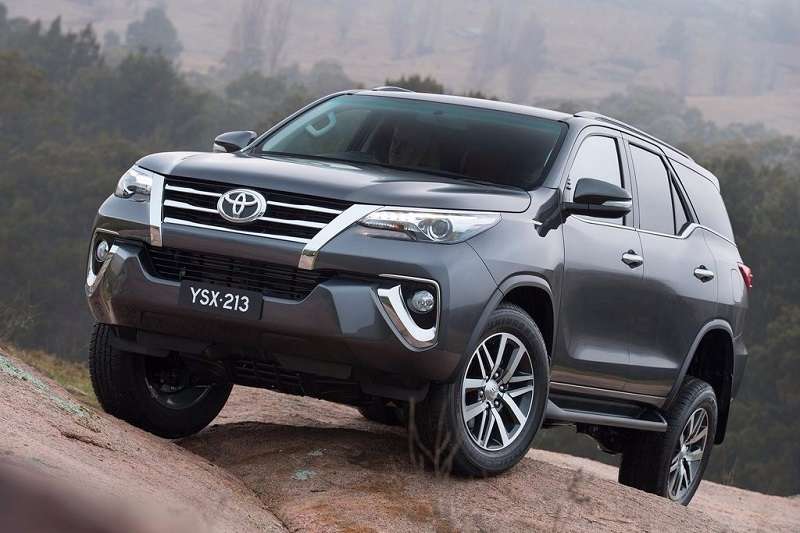 Toyota, the Japanese automaker has decreased the prices of its flagship SUV – Toyota Fortuner – by up to Rs 2.17 lakh. Thanks to GST, the Japanese automaker has also reduced prices of its other vehicles including Innova Crysta. According to new tax structure, utility vehicles and larger cars are biggest beneficiaries with tax reduced to 43% from 53%. The SUV in its new avatar has been receiving excellent response from car buyers across the nation. Available in both petrol and diesel engine options, the new Toyota Fortuner commands a waiting period of around 3-4 months.

Before GST, the new Fortuner was priced in the range of Rs 26.81 lakh to Rs 32.02 lakh (ex-showroom Delhi). This new model is now priced between Rs 24.42 lakh – Rs 29.17 lakh (ex-showroom Delhi). On the other hand, the new Innova Crysta and Corolla Altis sedan prices have been reduced by up to Rs 98,500 and Rs 92,500, respectively. The new Fortuner has been segment leader since its launch. The reduced pricing will further increase its demand.

The new model features sharp looks, powerful engines and spacious cabin, and gets premium over the previous model. Launched in 2016, the SUV has witnessed several changes aesthetically as well as mechanically with new engines powering the lineup. The vehicle gets a new 2.8-litre GD diesel engine that replaces the 3.0-litre unit. Adding to it, the SUV also gets a 2.7-litre petrol engine.

Both the above mention engines have been sourced from Innova Crysta, which also received generation change in 2016. Transmission options include a six-speed manual and an automatic unit. Petrol versions are only available with a RWD system while the diesel model is being offered with 4×4 drive system. It is the only SUV in its league to have a petrol option. This gives it an edge over rivals including Ford Endeavour, Chevrolet Trailblazer and Isuzu MUX that lack petrol option. Featuring fresh design, more powerful engines and new features, the new model sales have crossed 1 lakh unit mark in less than 1 year. Check – Toyota Fortuner 2017 Interior & Exterior Image Gallery

The new Fortuner is being offered in two petrol and 4 diesel variants. Thanks to GST, the new model is now gets cheaper by up to Rs 2.17 lakh. The petrol range prices start at Rs 24.41 lakh for manual version, which goes up to Rs 25.96 lakh for the automatic model. The diesel range on the other hand is priced in the range of Rs 25.87 lakh to Rs 29.17 lakh. All the prices are ex-showroom New Delhi. As a reminder, the new model was priced at Rs 26.81 lakh for base petrol model and Rs 32.02 lakh for the top-end diesel version. Also Read: Toyota Vios Might Come to India in 2017 – Picture Gallery & Details

It is available with a choice of petrol and diesel engines in two manual and one automatic option. The oil burner is a new 2.8-litre engine that is borrowed from the new Innova Crysta. This 4-cylinder, in-line unit replaces the 3.0-litre engine and is capable of producing a maxim power output of 174.5bhpp at 3,400rpm and a peak torque of 450Nm between 1,600 to 2,400rpm. Transmission duties will be carried out by a six-speed manual and a six-speed automatic unit.

Petrol version of the new Fortuner is powered by a new 2.7-litre, 4-cylinder unit that produces 163.7bhp of maximum power along with a peak torque of 245Nm. This engine is paired to either a five-speed manual or a six-speed automatic transmission with paddle shift & shiftlock. Check Out – A Complete List of Upcoming Toyota Cars in India 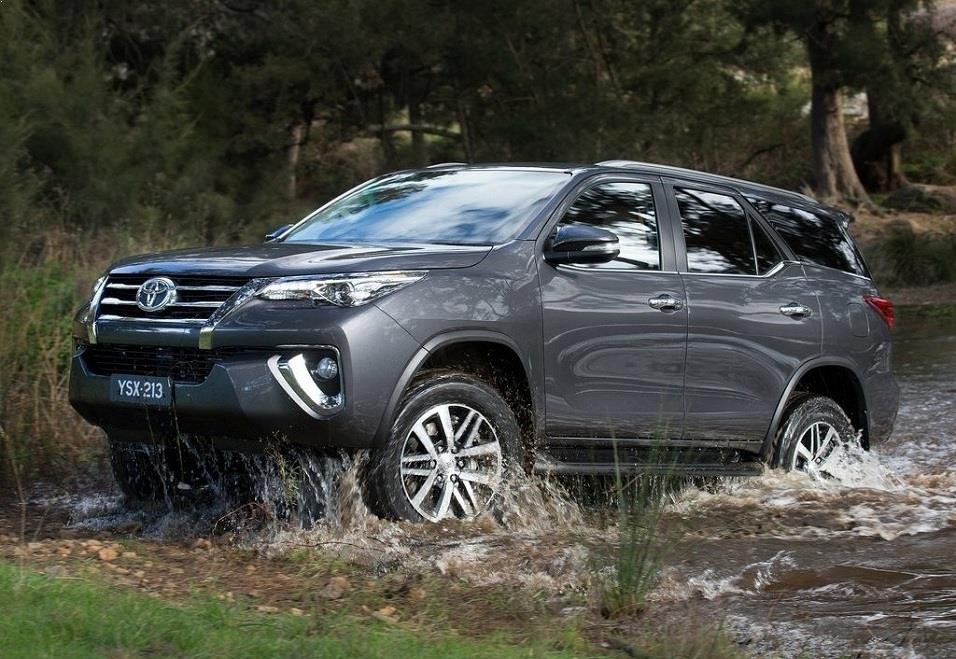 Built on the new Hilux Revo pickup truck platform, the new Fortuner is lighter and stiffer than the model it precedes. The diesel version of the SUV is claimed to be 10% more fuel efficient than the engine it replaces. While the manual versions give 14.24kmpl, the automatic model is claimed to return 2.9kmpl. The mileage for petrol manual and automatic variant is quite similar at 10.01kmpl and 10.26kmpl.

Based on the new ladder frame chassis, the new Fortuner is longer, wider and taller than the previous model. Compared to the old Fortuner, the new model gets 90mm increase in length, 15mm in width and 15mm in height. The wheelbase measures 2,745mm long and the ground clearance is 225mm. The fuel tank capacity is massive at 80-litres 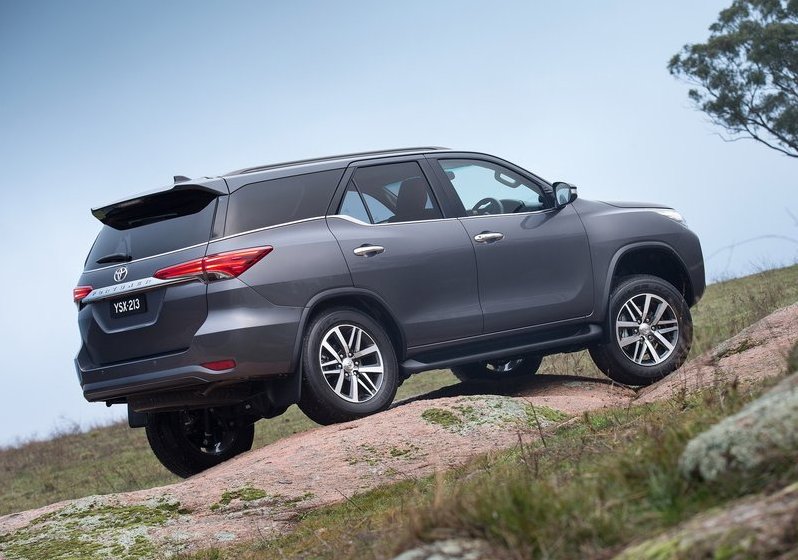 Aesthetic changes to the new Fortuner are radical with an all new design transforming the look entirely. With the addition of new design elements, it looks more upmarket. At front, the SUV sports dual-slat grille, dual projector headlamps with LED DRLs, revised bumper with reflectors, muscular bonnet and chrome finished fog lamps.

Changes made to the side profile are prominent with square wheel arches and black cladding accentuating muscular look. The slight chrome work around window looks refreshing. Equipped with 17-inch steel wheels, the lower trims in the range get all-terrain tyres. While the top-spec variant rides on the 18-inch alloys wrapped to the highway tyres. The rear profile dons a chic styling with the LED tail lamps, redesigned bumper and integrated reflectors completing the plush look. 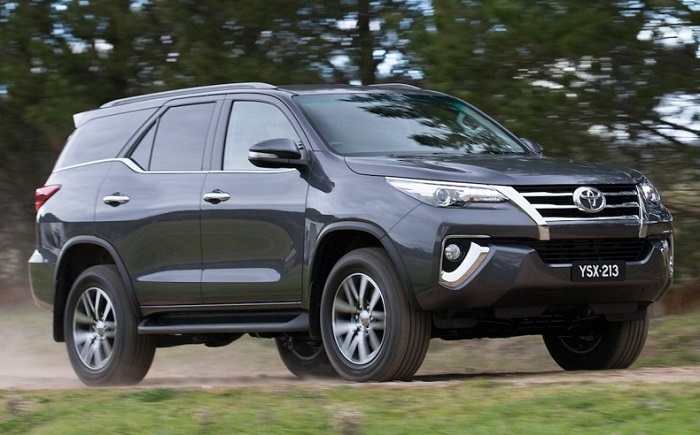 The cabin is spacious and takes inspiration from Corolla sedan and new-gen Hilux pickup in terms of styling. Sporting dual tone colour scheme and premium upholstery, the interior styling is a huge departure from the previous model. To make it more desirable, Toyota has added new tech. Besides, the dashboard design is all-new and there are multiple storage points inside.

Moreover, the SUV received 5-star rating from Latin New Car Assessment Program (NCAP). Even the South American crash testing agency has confirmed that Fortuner’s occupant safety levels are as good as that of Toyota Hilux pick-up truck. Interesting, Fortuner performed better in some of the bio-mechanical tests. Out of 37, the new Fortuner scored an impressive 33.95. Besides, it has also received 5-star safety rating from Australasian NCAP.