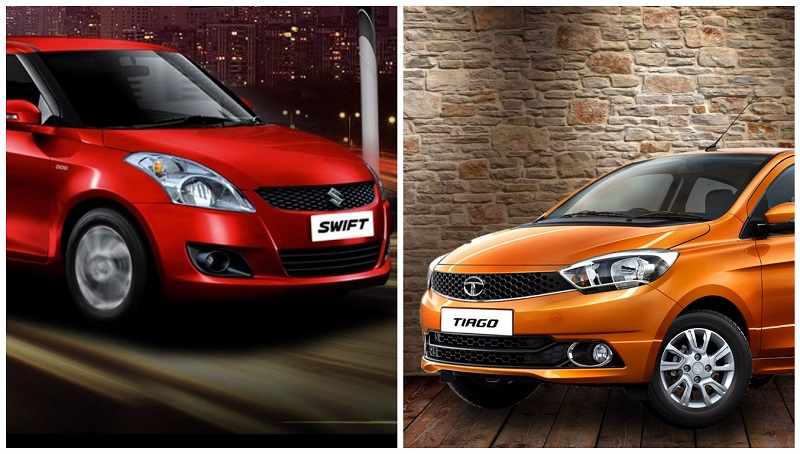 While we all are awaiting launch of all-new Maruti Swift, slated for launch at the next year’s Auto Expo in February, the existing model is still managing decent monthly sales. That said, Swift still finds a spot on the list of top-10 best-selling models (monthly basis). On the other hand, we have Tata’s stellar hatchback, Tiago built on the new IMPACT design theme that turned out to be a saviour for the company when it was struggling in the passenger car segment. Packed with a bunch of segment best features, Tiago has managed to carve a niche in the B segment, while on the other hand Swift enjoys unprecedented popularity even after 12 years of its launch. In this interesting spec-based comparison report, we put Tiago on crosshairs of Maruti’s popular hatchback Swift, find out the details below. Check out Tata Tiago Vs Maruti Swift-Price, Engine, Mileage & Dimensions –

-Tata Tiago carline is offered with 1.2-litre, three-cylinder Revotron engine in manual transmission.
-One must note that AMT gearbox is available only on the XZA (A stands for AMT) petrol variant priced at Rs 5,25,752 (ex-showroom, Delhi).
-The Tiago diesel range is propelled by the 1.05 Revotorq oil burner with a standard 5-speed manual transmission.
-The Tiago carline additionally comes with multi-drive modes.
-While the Swift carline misses out on an auto unit and drive modes.
-The hatchback uses Maruti’s tried & tested 1.2-litre petrol and Fiat sourced 1.3-litre oil burner.
-Both the engines are paired to a conventional 5-speed manual gearbox.

–Powered by Tata’s 1.2-litre, three-cylinder unit, Tiago petrol returns 23.8kmpl in ideal conditions.
-The diesel range on the other hand is claimed to deliver 27.28kmpl.
-Maruti Swift lags with a significant difference in claimed fuel economy in both petrol and diesel guise.
-The petrol-powered variant of Swift is rated at 20.4kmpl against the diesel with 25.20kmpl of ARAI rated mileage.

-Dimensionally, Maruti Swift is longer, wider and sits on a longer wheelbase.
-While Tiago is taller than Swift with a minor difference of 5mm.
-There is a significant difference in the luggage storage capacity with Tiago offering around 38L more space.

-The entry-level XB variant only gets an immobilizer.
-Dual front airbags are bereft in XB variant, while it is optional across line-up save for XZ & XZA variants.
-Speed dependent auto door locks are offered from XM onwards.
-Rear Defogger & rear parking sensors are also available from XT onwards.
-ABS with EBD & corner stability control is restricted to the XZ & XZA trims.
-Similarly, front fog lamps, rear defogger & rear smart wiper with washer are specific to the XZ and XZA grades.
-On the other hand, Swift carline gets standard driver side airbag, whereas co-passenger airbag is optional on LXi/LDi & VXi/VDi variants.
-The new gen ABS with EBD is standard on VXi (O), VDi & ZXi/ZDi trims. Similarly, brake assist is available on VXi (O), VDi & top-spec Z trims.
-Reverse Parking sensors are restricted to the top-spec ZXi/ZDi trims.

We’ll start with the Maruti Suzuki Swift which has been ruling the market for almost a decade. Despite being in the market for years, the car has maintained its charm as the company kept updating it at regular intervals. While the overall shape of the car has remained intact, the vehicle has received several new elements both inside and out. As against the first generation model, the current version looks sharper and sportier than before. Sweptback headlamps, prominent front intakes, sharp bumpers , prominent wheel arches, blackened A-pillar and few other elements give it a sporty appeal.

The Tata Tiago, on the other hand, is like no other Tata cars we have seen to date and that has surely worked in its favour. Within a month of its launch, the Tiago became the top-selling car. The Tiago looks a lot European than Indian, all thanks to Tata Motors three design studios in UK, Italy and Pune that have worked jointly on this project. The Tiago is the first product based on Tata Motors’ new IMPACT design philosophy which we’ll also see on Nexon and Kite 5. With feature such as a radiator grille, wrap-around headlamps with smoked lens, sloping rear windshield, integrated rear spoiler, body-coloured door handles and prominent creases on either sides give it an appealing look.

Since the design is quite a subjective matter, we leave it to our readers. Our personal choice is Maruti Suzuki Swift, but the Tiago is quite refreshing to look at. 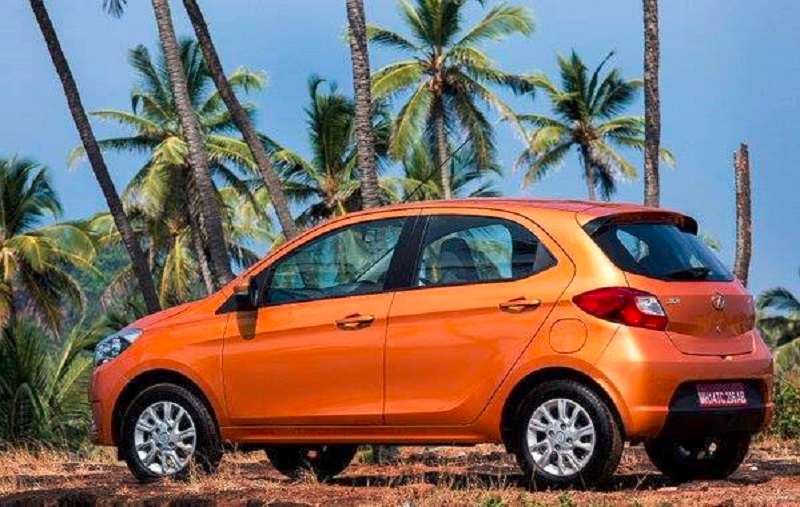 One thing that has worked in favour of the Tiago over its rivals is the interior material quality. As a matter of fact, the Tiago looks much plusher and more premium than the Bolt that is the company’s premium hatchback offering. In quality, the Tiago is very close to the Hyundai Grand i10 which had set a benchmark in this department upon its arrival. Maruti Suzuki Swift may not match the quality of the Tiago, but it feels sturdy. The Swift also has more comfortable drive and front passenger seats. Also, with all-black interior, the Swift looks appealing.