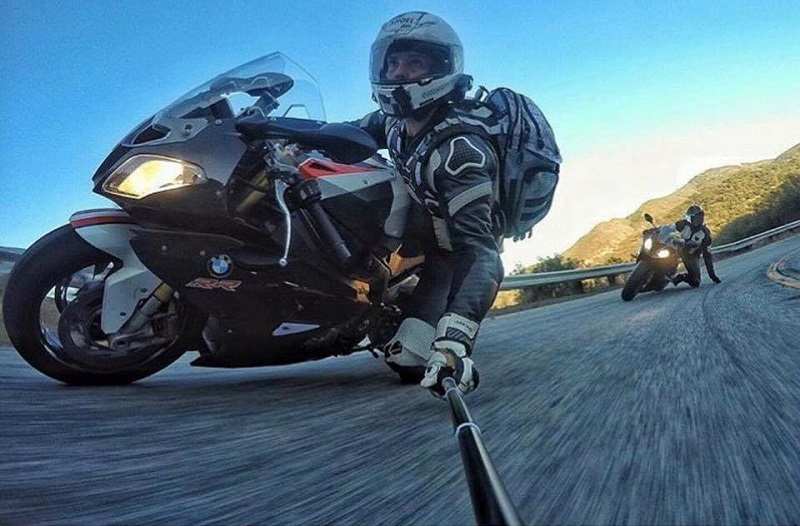 Nearly 60% of Indian two-wheeler users admit to ‘instinctively’ answering their mobile phones when riding, while 14% of Indian pedestrians admit to taking selfies while crossing the road, according to a survey commissioned by Samsung as part of its ‘Safe India’ campaign that seeks to spread awareness about the dangers of irresponsible usage of mobile phones, including taking selfies on the road.

The ‘Safe India’ campaign film has got an overwhelming response, crossing 100 million views on YouTube in just 32 days. Samsung had recently pledged its support to the Ministry of Road Transport and Highways’ drive to reduce road accidents, especially those that happen due to irresponsible usage of mobile phones. The ‘Safe India’ campaign was recently launched by Shri Nitin Gadkari, Union Minister of Road Transport & Highways and Shipping.

The survey conducted across 12 cities in India revealed that one-in-three car drivers tend to send a text message from behind the wheel if it were ‘important’. Pedestrians’ attitude to safety is no different from drivers, according to the survey. Of the pedestrians who responded, 64% said they regularly answer the phone while crossing a road, while a further 18% said they would immediately respond to a call from their superior at work, even if crossing a road.

In India, one road accident fatality happens every four minutes, according to government data. Not only does the country have the highest number of road accidents globally, according to a report by Carnegie Mellon University, Indraprastha Institute of Information Technology, Delhi and National Institute of Technology, Tiruchirappalli, India accounts for over 50% of selfie-related fatalities in the world today.

Shri Nitin Gadkari, Union Minister of Road Transport & Highways and Shipping, said, “Irresponsible usage of mobile phones, including the new trend of taking selfies on the road, is becoming one of the major causes of road accidents today. We want to bring down the annual road accident fatality figure of 1.5 lakh, which is the highest in the world, by 50%. For this we are already working on a multi-pronged strategy but need a lot of support from industry to be successful. We are glad that corporates such as Samsung are playing their part with this campaign. I invite all mobile manufacturers to contribute to this effort and help curb accidents due to irresponsible usage of mobile phones.”

“The overwhelming response encourages us to continue our efforts in supporting the Ministry of Road Transport & Highways in its effort to make Indian roads safer. At Samsung, we are happy that we have been able to contribute to creating awareness about this important issue of irresponsible usage of mobile phones on the road and people have definitely taken notice. The ‘Safe India’ campaign video crossing 100 million views on YouTube is also a testimony of the love and trust that consumers repose in brand Samsung,” said Mr. Ranjivjit Singh, Chief Marketing Officer, Samsung India.

“While people know that they should avoid using mobile phones when they are on the road, most of them do not pay heed. The brief was to create a film that makes people realize the seriousness of the issue and make a behavioral change. The campaign has stirred a lot of conversations around the nation. We are humbled with the response the campaign has got and are thankful to Samsung for giving us the opportunity to make a difference in the society,” said Mr. Sagar Mahabaleshwarkar, Chief Creative Officer, Cheil India.

According to the Safe India survey, 11% of two-wheeler riders would always answer their phone when on the road, regardless of who was calling, 30% would respond to calls from family while 18% of the riders responded to work-related calls. When it comes to messaging—texts or social media updates—an alarming 23% of two-wheeler riders admitted to reading and replying to texts if the message they received was ‘important’.

Among respondents, 80% say they are ‘very concerned’ about the number of children they have seen crossing the road while on the phone, while 68% admit to seeing truck and bus drivers using their phones while behind the wheel. Around 55% of respondents think mobile phone companies should employ technology to prevent misuse of mobile phones on the road.

While Samsung is creating awareness about the dangers of irresponsible usage of mobile phones through the ‘Safe India’ campaign, including taking selfies on the road, it has also invested in developing safe mobility apps for two-wheelers, cars and also those who are walking. These apps, part of the Company’s ‘Make for India’ initiative, have been developed at Samsung India’s R&D centres in Bengaluru and Noida and are based on Indian consumer insights. 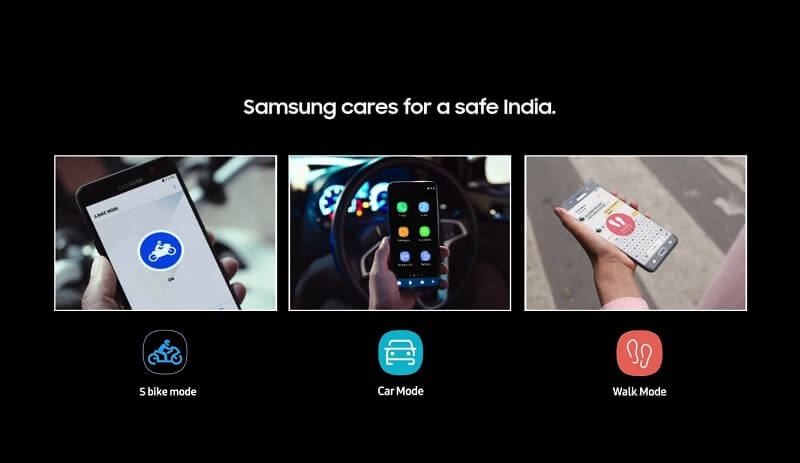 S bike Mode: This feature, once activated, notifies the rider of an urgent incoming call while s/he’s riding her/his bike. If the call is urgent, the caller can press 1 and the call will get through, but not until the bike stops. It also has a Smart Reply feature, where selected contacts will receive an auto-SMS with an estimate of when the user is likely to be available for a call. So all the rider needs to do is just simply tap the S bike icon and enjoy a hassle free ride.

Car Mode: This feature facilitates distraction-free and safe usage of smartphones while driving. What’s more, it reads out messages for the driver, allowing him/her to access their favorite playlists, navigation and much more through distraction-free touch and voice interactions. It also has a ‘Do Not Disturb’ feature so that drivers can drive safe and stay connected at the same time.

Walk Mode: This mode is designed to reduce accidents when walking and using mobile. It detects and alerts pedestrians when they are using their device while walking; it also offers the option of hiding notifications and locking the screen while walking.

2. 14% of Indian pedestrians admit to taking selfies while crossing the road at least once a week

3. 70% pedestrian respondents said they regularly answer the phone while crossing a road

4. 18% pedestrian respondents said they would immediately respond to a call from their boss, even if in the process of crossing a road

5. 51% of pedestrian respondents admit that they would respond to their boss by the third call, even if in the middle of the road.

6. 80% of respondents describe themselves as ‘very concerned’ about the number of children they have seen crossing the road while on the phone

7. 68% admit to seeing and also being ‘concerned’ about truck and bus drivers using their phones while behind the wheel at least once per month.

8. 55% of respondents think mobile phone companies should employ technology to prevent misuse of mobile phones on the road.