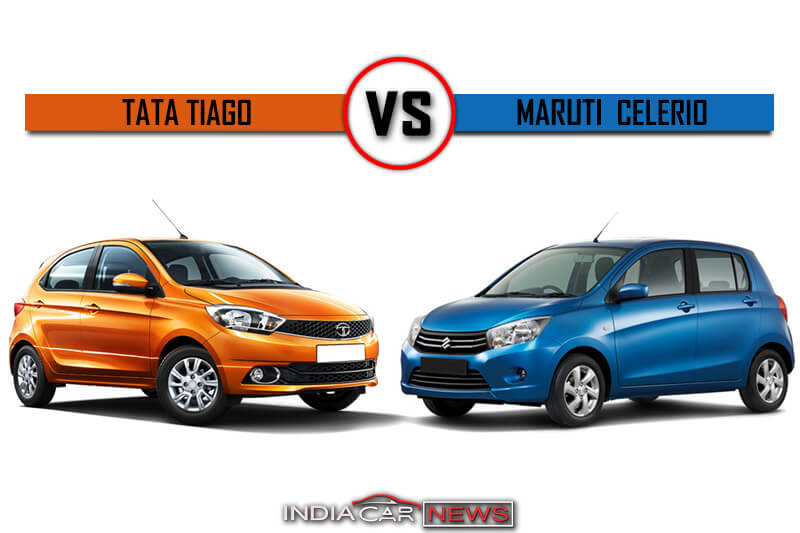 Here’s a specifications-based comparison between the Tata Tiago and Maruti Celerio.

October 10, 2016 – Despite increasing demand for premium cars in the Indian market, the entry-level segment continues to dominate overall sales in the industry – all thanks to some really capable products introduced in the last two years or so. One such hugely successful product is the Tata Tiago that has brought Tata Motors back on the growth path. Though the Bolt and Zest couldn’t do as good as the company expected, the Tiago is doing fairly well for the company and is currently the top-selling Tata product in India. Seeing people’s inclination towards Tata’s new offering, Maruti Suzuki introduced the Celerio with additional safety pack to retain its top position in the segment.

In case you are confused between these two cars, here’s our specs-based comparison to help our readers pick the right product.

The Tiago, built on Tata’s new IMPACT design philosophy, looks quite sporty  The hatchback has been designed with inputs from Tata’s Pune, Coventry and Turin based design centres. The front fascia of the car features Tata’s new signature grille with ‘Humanity Line’  running towards headlights. The side profile gets body-coloured door handles and character line emerging from the A-pillar. The car sits on the upgraded XO platform, and rides on 14-inch alloy wheels. At the rear, there are new tail-lamp enclosures, a sloping rear windshield and an integrated rear spoiler.

On the other hand, the Maruti Celerio is designed on the company’s CICO (Curve in, Curve Out) philosophy that makes it look sportier than its replacement – i.e. the A-Star. Upfront is a twin-slat grille, edged sweptback headlights, bonnet with character lines and bumper with a large air dam. At the rear end, the car looks typical Maruti with conventional tail-lamp enclosures and other design elements.

In this department, the Tata Tiago surely has an upper hand over the Celerio.

The Tiago shares its interior styling and equipment with the Zest. It is one of the most feature-loaded cars in its league. The car gets a dual-tone black and beige interior with hexagonal centre console, a multi-functional three-spoke power steering, rectangular air conditioner vents, and revised power window switches and gear-lever. The top-end variant of the hatchback comes with a host of features such as the next-generation Connectnext Infotainment system by Harman, steering mounted controls, turn indicators on wing mirrors, individual rear headrests, 60:40 split folding rear seats and all-four power windows. Safety equipment like dual front airbags, 9th generation ABS with EBD, corner stability control and rear parking sensors with display on infotainment system are also on offer. All these features make the Tiago the safest car in its category.

The Maruti Suzuki Celerio offers a spacious and practical cabin. The company offers optional dual airbags across all variants of the hatchback. The top-of-the-line variants also get anti-lock braking system (ABS). Other features on offer are electrically adjustable wing mirrors, a 60:40 split rear seat, rear window wiper and washer, front and rear power windows, headlight leveler, keyless entry and several other features. The front seats with fixed headrests and rear seats with decent legroom feel very comfortable. Though, the thigh support isn’t up to the mark.

The Tiago comes with both petrol and diesel engine options. The petrol version of the hatchback is propelled by a 1.2-litre, three-cylinder Revotron engine that generates 83.8bhp and 114Nm. The diesel model derives its power from a 1.05-litre, 3-cylinder Revotorq motor that is good for 69.04bhp of power and 140Nm of torque. Both the powertrains come with segment-first Multi-drive modes, and are claimed to offer high fuel efficiency and superior performance. Power is transmitted to the wheels via a 5-speed manual gearbox.

The Maruti Celerio is available with two engine options – a 1.0-litre, 3-cylinder K10B petrol and a 0.8-litre, 2-cylinder DDiS diesel. The petrol mill pushes out a maximum power of 67bhp at 6,000rpm and 90Nm of torque at 3,500rpm, while the diesel mill offers 47bhp and 125Nm. Transmission options on offer are a 5-speed manual (standard) and a 5-speed automatic (only on the petrol variant).

In terms of power and performance as well, the Tiago beats the Celerio hands down.