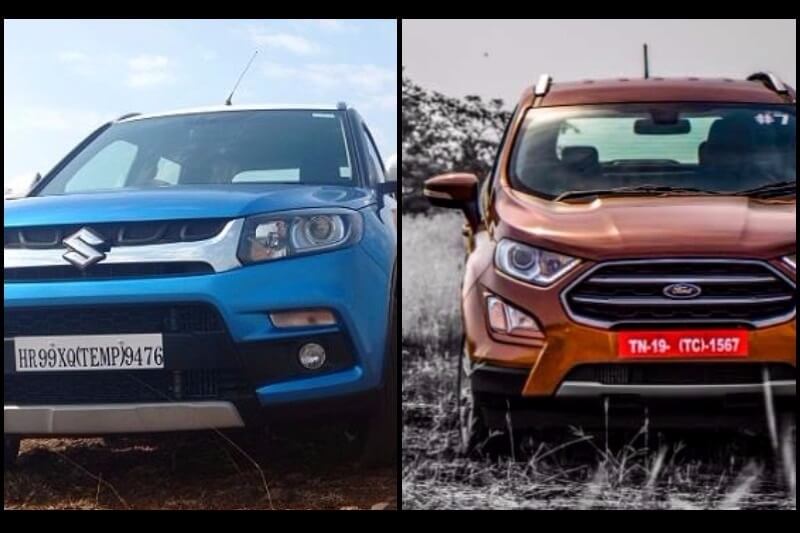 Here’s a specifications-based comparison between the Ford EcoSport Vs Maruti Vitara Brezza.

Ford had launched thoroughly updated version of its stellar model EcoSport that pioneered the subcompact segment four and a half years ago in 2013. The SUV rose to fame for its contemporary styling and with the new styling changes, it gets even better. While Maruti Vitara Brezza came in late, the SUV carved a niche spot in the competitive segment in no time. Maruti Vitara Brezza was launched only with a diesel engine, albeit a petrol unit will soon be added to the carline. Priced competitively, it is among the top-selling models in the segment and we bring you a detailed spec-based comparison between the new Ford EcoSport and Maruti Vitara Brezza models, read on to know more. Check out Ford EcoSport vs Maruti Vitara Brezza price, specifications, mileage, dimensions and other details –

-The pre-facelift version of EcoSport waspriced between Rs 7.31 lakh to Rs 10.92 lakh (all prices ex-showroom, Delhi).

-Changes to the EcoSport facelift include cosmetic updates to the exterior, styling changes to the interior, a new 1.5-litre petrol engine and additional in-cabin tech. Even with these changes, the new Ford EcoSport prices have witnessed minimal changes.

-The Maruti Vitara Brezzacarline is only available with a diesel engine.

-Its globally acclaimed 1.0-litre EcoBoost engine has also been removed from the carline owing to low demand. However, this engine will soon make its way with the EcoSport Titanium Sunroof edition.

-The standard 5-speed manual gearbox and optional 6-speed AT (for select petrol trims) have been carried over from the pre-facelift model.

-The company will soon add a petrol engine to the carline and it could also get an automatic unit. Read: New EcoSport Vs Old – What is the difference?

-The petrol manual variants in EcoSport line-up are rated at 17km/l opposed to the petrol AT trims with claimed mileage of 14.8 km/l.

-There is slight improvement in terms of mileage for the diesel variants that now return 23km/l.

-While the paddle shifters are reserved for the top-spec AT trim. Read – New Ford EcoSport 2017 Review – Much More Than A Mid-life Facelift!

-While Trend+ AT and Titanium+ variants additionally get EBA, ESC, TCS and HLA.

-TheMaruti Vitara carline comes loaded with standarddriver side, whereas the co-passenger side airbags, ABS & EBD are missing in the LDi and VDi grades.

-It is India’s first vehicle certified for offset (AIS 098 at 56km/h) and side impact crash. The vehicle was tested at MSI’s R&D facility in Rohtak.

Most of the changes on the new EcoSport have been made to the front. There is a new grille that is seen in Ford’s global models as well as the new Endeavour that is on sale in India. The new headlampunits comewith integrated DRLs and the redesigned bumper features larger fog lamps. On the side, it gets larger 17-inch alloys on the Titanium+ variant. Round the back, Ford has not made any change and the mounted spare wheel has also been retained.

Maruti Vitara Brezza with its upright hood, square shaped cladded wheel arches and short overhangs looks muscular yet compact. The high shoulder line and ground clearance give it a bold look. LED units with projector headlamps and LED DRLs collectively with honey-comb air-dam crafted in retro fashion round up the front look. Other prominent bits such as sloping roof line and roof rails further enhance it visually.

There is a stark change in terms of material quality used inside that gives new EcoSport a more upmarket look. The dashboard sports an all-new design, though it still has some rough edges. Ford has added a new leather wrapped steering wheel with mounted buttons and it now comes with SYNC 3 infotainment system with Apple CarPlay and Android Auto. While Ford has addressed most of the issues, the subcompact SUV still misses out on rear AC vents. Other prominent bits such as two illuminated USB ports and 25 utility points are also offered inside. As for the comfort, front & rear seats are well spaced and offer good visibility from inside. Though, we feel rear is good only for two adults and a kid.

In line with its exterior, Maruti Vitara Brezza gets a sporty cabin with piano black highlights on the centre console. It comes with five shade mood lighting and there is comfortable space to accommodate 5 people.