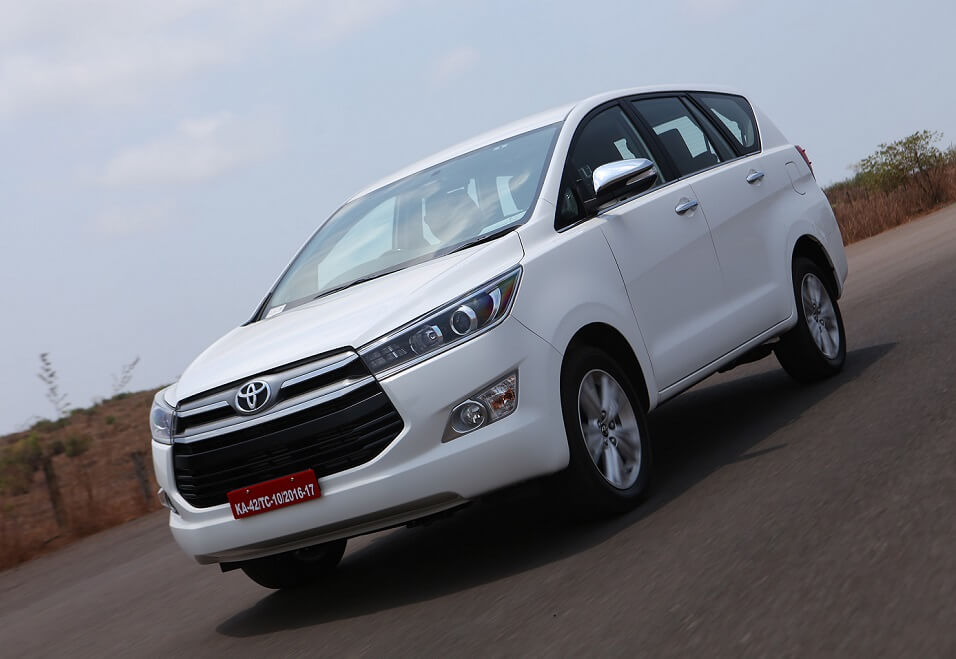 The implementation of GST (Goods & Service Tax) has seen automakers across India to announce price reduction in their product portfolio. The utility vehicle segment and larger cars are the biggest beneficiaries of this new one-country, one-tax regime. Thanks to new taxation, UV segment has witnessed a big drop in their prices as the tax has been reduced to 43% from 55%. Toyota, the Japanese automaker has announced to pass on these benefits to customers from July 1, 2017. The company has reduced the prices of its top-selling MPV – new Toyota Innova Crysta – by up to Rs 98,500. Also Read: New-Gen Toyota Fortuner SUV – Picture Galley

Besides new Innova, Toyota has also reduced the prices of Fortuner SUV by up to Rs 2.17 lakh and Corolla Altis by up to Rs 92,500. The Innova Crysta has been the best-selling MPV currently on sale in India. With price reduction, the new model demand could further increase from July 2017 onwards. This premium sedan is available in petrol and diesel guise. The new version was priced between Rs 13.98 lakh for base petrol and Rs 21.19 lakh for the top-end model. Thanks to GST, the prices of the MPV have been reduced significantly. While the petrol range starts at Rs 13.30 lakh for base variant and Rs 18.84 lakh for top-end model, the diesel model is now priced between Rs 13.52 lakh and Rs 20.07 lakh (ex-showroom, Delhi).

Dominating the multi-purpose-vehicle space for years, Toyota Innova witnessed sea change, both in cosmetic and mechanical terms, as it propelled into the new generation. Apart from the new skin and an additional suffix ‘Crysta’, it received new engines in both petrol and diesel fuel options. Although, takers for the petrol variants in the UV space are few, Toyota rolled out the petrol powered version to combat the ban on diesel units exceeding 2.0-litre capacity (please note the ban has been lifted now). With a new face and a new heart underneath, the 2017 Toyota Innova Crysta has reclaimed its reign once threatened by contemporary and more affordable MPVs. In fact, Innova has now ventured into new realm where it has left behind all the rivals, be it pricing or features, taking on the likes of 7-seater, family vehicles

Sporting a more premium look, Innova is all new inside-out with new elements introduced to the exterior and interior. Toyota has altered the dimensions in a bid to offer more space inside. That said new Innova is longer, wider and taller compared to the preceding model. Inside, it is available with a seven and eight seat layout. The in-cabin features are rich as it sports new equipment such as the 8-inch touchscreen infotainment system with voice commands, TFT screen for MID, ambient lighting etc. Under the skin, it comes with an option between two diesel units and one petrol engine, mated to a five-speed manual and 6-speed automatic transmission. In terms of safety, the new Innova is well packed with multiple airbags, ABS, EBD, VSC (Vehicle stability Control) and HAC (Hill-Assist Control), for the rescue of occupants. 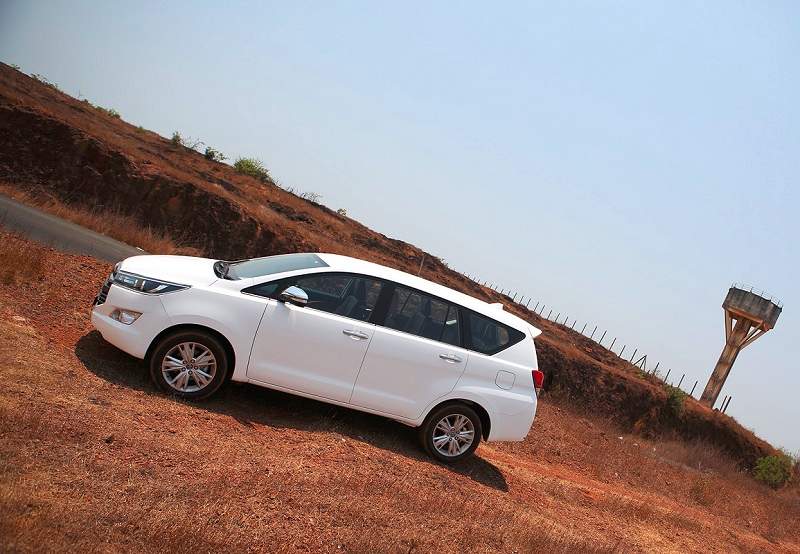 The Innova Crysta model series was priced in the vicinity of Rs 13.98 lakh to Rs 21.19 lakh (ex-showroom, Delhi). Thanks to GST, the prices of the MPV have been reduced by up to Rs 98,500. The new model is available in petrol and diesel fuel options. While the petrol model is now priced between Rs 13.34 lakh and Rs 18.84 lakh, the diesel model is tagged in the range of Rs 13.52 lakh and Rs 20.07 lakh. All the prices are ex-showroom, Delhi. It is to be noted that the carline is available with one petrol, two diesel engines and one manual & one automatic gearbox.

Launched last year in May, Innova Crysta witnessed surge in demand that continues even today. There was a slight drop in auto sales due to demonetization but the introduction of the new GST is likely to help Innova to further improve its sales. Despite increase in production, the Crysta commands a waiting period of around 1-2 months. Read More – Complete List of Upcoming Toyota Cars in India

The new Innova carline comes with three engines including two diesel and one petrol units. The diesel Innova gets 2.4 litre GD VNT inter-cooler diesel and the 2.8-litre GD oil burner. Petrol powered Innova on the other hand draws power from the 2.7 litre dual VVT-I engine. As for the power output, the 2.4 litre diesel is good for 146.9bhp and 343Nm of torque as opposed to the 174.5bhp and 360 produced by the 2.8 litre powertrain. Also, the 2.4 litre petrol unit is claimed to be 10% more fuel efficient than the 2.5 litre D4D ‘KD’ oil burner from the previous model.

The 2.7 litre, four cylinder, DOHC, dual VVT-i petrol engine makes maximum power of 166bhp at 5,200rpm and 245Nm of torque at 4,000rpm. Transmission options on the new Innova Crysta include a 5-speed manual unit and a 6-speed automatic gearbox available on select variants (GX and ZX). In line with the previous model, the new gen Innova comes with 2WD and 4WD drivetrain system. Read: Here’s Everything You Want to Know About Toyota Innova Crysta Petrol 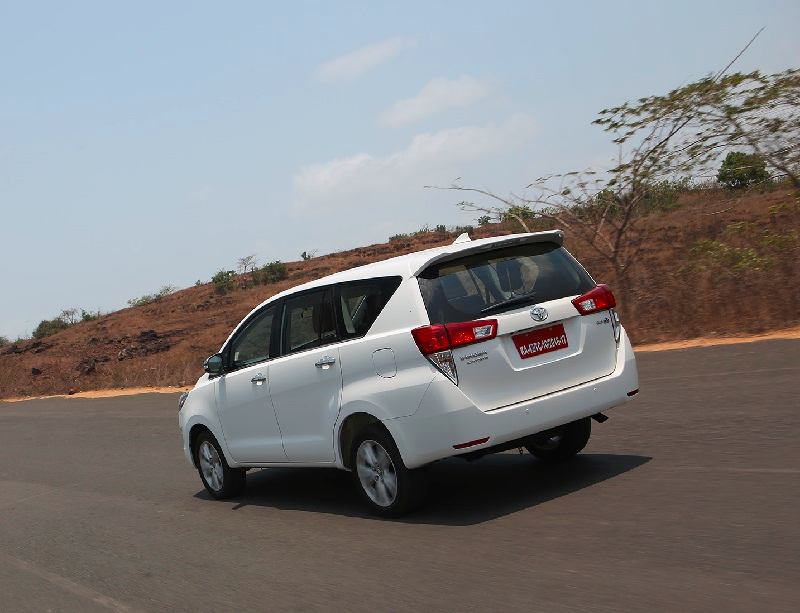 V– In addition to the above features, V grade gets a bigger 8-inch entertainment system, a TFT screen for the MID, ambient LED lighting and automatic climate control. 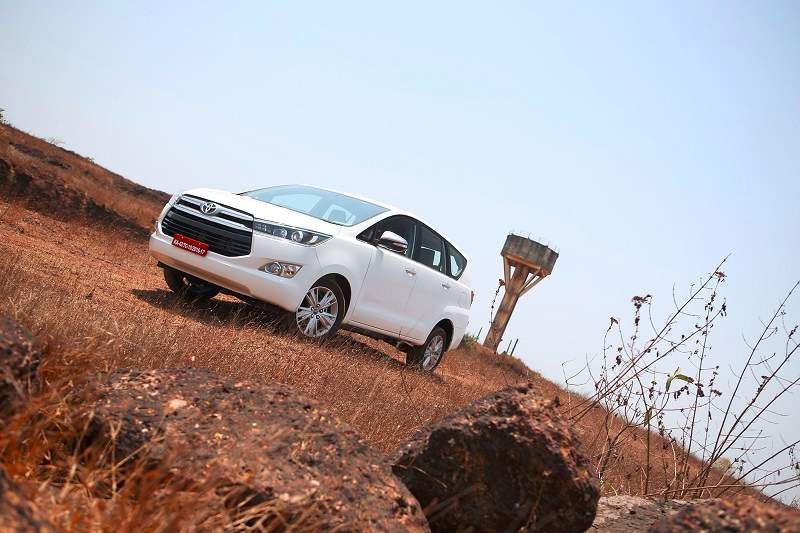 Conceived on Toyota’s new IMV (International Multi-purpose Vehicle) architecture referred as the FIRM (Frame with Integrated Rigidity Mechanism), the new Innova is lighter, safer and stronger than the previous model. Additionally, there is a noticeable change in the front and side impact structure. The new platform also aides improved handling and ride quality. And most importantly, there has been a stark change in the looks as the second generation Innova looks more premium now. That said, it borrows some design cues from new Fortuner, Camry, Altis and Highlander. Front profile has been completely transformed from a chrome laden face to an aesthetically crafted facet. The new dual-slat chrome grille followed by the wide air-dams cascading on the bumper give a whole new look to the MPV.

The swept-back headlamps with integrated LED DRLs reinforce the modish stance. In the higher trims, the standard multi-reflector headlamps have been replaced by the LED projector headlamps. View from the side is good too, with pronounced wheel arches 17-inch alloys and narrower glass lending a new look. Move to the rear and first thing you notice is the new tail-lamp cluster and the multi-layered bootlid. Other changes include revised bumper, chrome around licence plate enclosure. In dimensional terms, the new Innova is 150mm longer, 70mm wider and 35mm taller. The rear profile of the car has been revised with a new bumper, chrome highlighted license plate enclosure, all-new tail lamps and multi-layered bootlid. With a long wheelbase and slightly longer overhangs, the all-new Innova Crysta promises a more spacious cabin than the previous model. Coming to dimensions, the 2016 Toyota Innova Crysta is 150mm longer, 70mm wider and 35mm taller than the old model. The MPV now measures 4,735mm in length, 1,830mm in width and 1,795mm in height. Though, the wheelbase remains unchanged i.e. 2,750mm. The 2016 Toyota Innova Crysta comes in a choice of 6 exterior shades – Garnet Red, White Pearl Crystal Shine, Avant-garde Bronze, Silver, Grey and Super White. 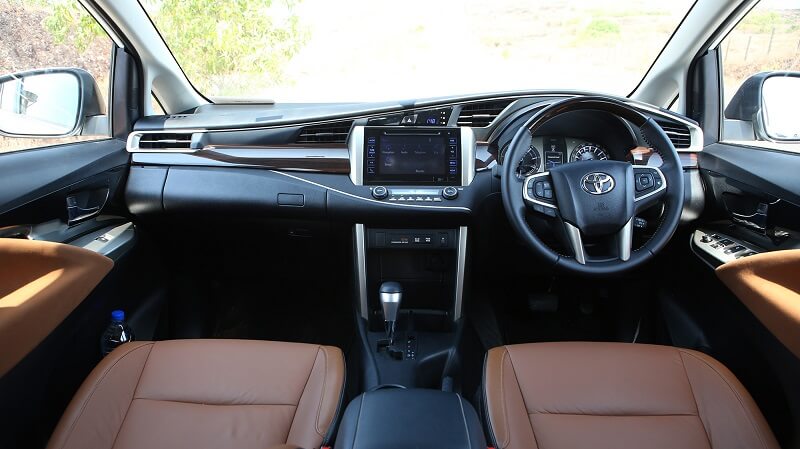 Compared to the first generation model, the cabin has been up-scaled both in terms of styling and features. Although,the wheelbase remains unchanged but the increase in length, width and height makes for a spacious cabin. The two-tone colour scheme with silver accent and ambient LED lighting classes up the cabin. Available with seven and eight seat configuration, the MPV has set new benchmarks in the UV segment. As for the in-cabin tech, it benefits from the 7-inch entertainment system with voice commands, Bluetooth connectivity, automatic climate control and rake-and-reach adjustable steering. The higher trims in the line-up get additional provisions like the smart entry with push button start and wood finishing on the panel.