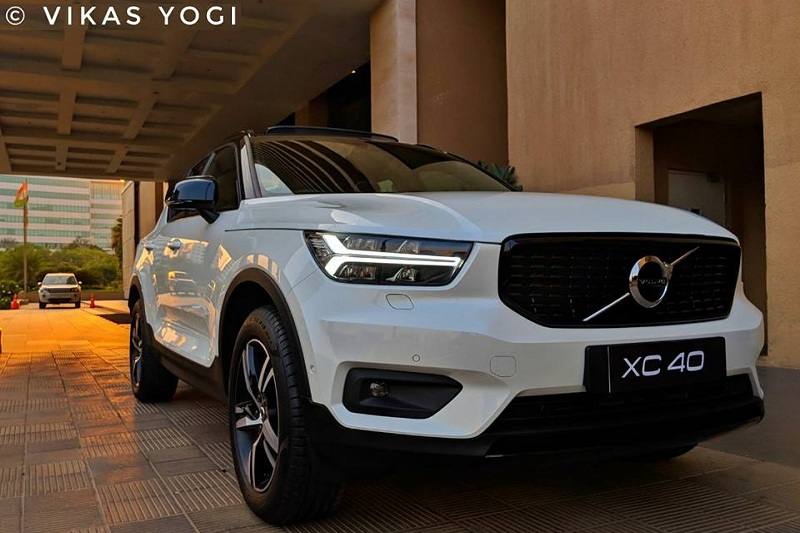 – Volvo XC40 is the smallest and the most affordable SUV from the Swedish carmaker in India.

– The SUV comes in a single variant powered by a 2.0L diesel engine.

Volvo’s smallest and the most affordable SUV – XC40 – has finally made its way to India. Available in a single R-Design variant, the Volvo XC40 has been priced at Rs 39.9 lakh (ex-showroom, India). One must note that the price is introductory. Claimed to be “among the safest, well-equipped compact SUVs available”, the SUV first broke cover on September 21, 2017 in Milan, followed by its public display at the 2017 Los Angeles Auto Show. In the luxury compact SUV space, the new 2018 Volvo XC40 competes with multiple cars such as Jaguar E-Pace, BMW X1, Audi Q3 and Mercedes-Benz GLA.

Interestingly, the Volvo XC40 is the smallest and the first SUV to be rolled out from the brand’s new 40-series. It’s also the first Volvo to be designed on the EV-ready modular platform, which is jointly developed with owner Geely. Globally, the SUV comes in two trims – Momentum and Inscription – along with R-Design variants and a ‘First Edition’ version. The India-spec version of the SUV sources its power from a 190bhp, 2.0L diesel engine coupled to an 8-speed automatic gearbox. 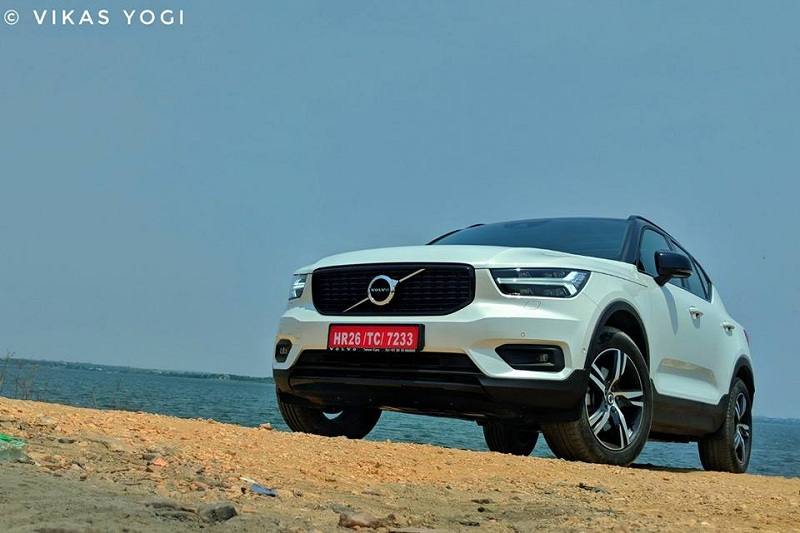 In the company’s Indian product lineup, the new Volvo XC40 sits below the new-gen XC60 and takes on the Jaguar E-Pace, Audi Q3, BMW X1 and Mercedes-Benz GLA. Volvo’s Ghent based facility in Belgium serves as production hub for the SUV. In India, the new XC40 is being imported via CBU (Completely Built Unit) route, thus making it feasible to heavy import duties. Despite a CBU model, it will be the most affordable SUV from the Swedish luxury carmaker in the country. The Volvo XC40 is available in a single R-Design variant priced at Rs 39.9 lakh (ex-showroom, India). Read About – New Volvo V40 & V40 Cross Country 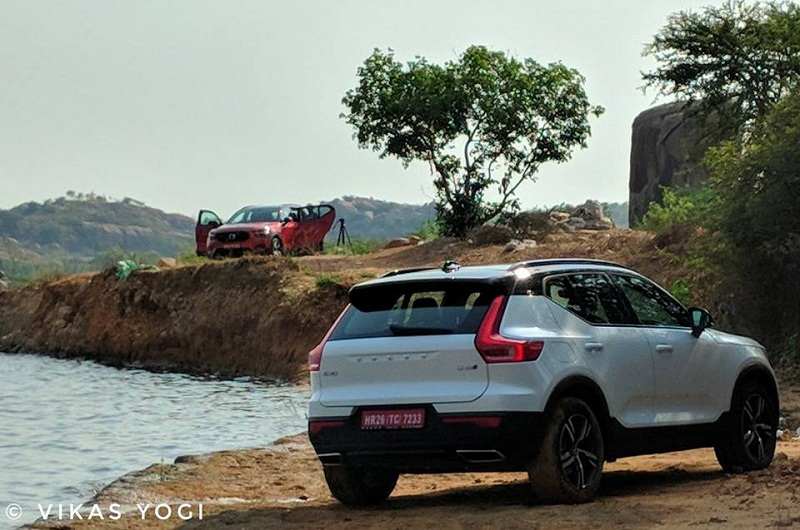 Under the hood, the India-spec XC40 R-Design houses a 2.0-litre, 4-cylinder diesel motor matched to an 8-speed automatic transmission. This turbocharged oil burner can make a top power of 187bhp against a peak torque of 400Nm. Transmitting power to all four wheels is the Haldex AWD (all-wheel-drive) system. Read  – Volvo XC90: All You Need To Know

The XC40 is the first Volvo car designed on the brand’s new modular CMA (Compact Modular Architecture) platform. The same architecture will be used for the upcoming Volvo 40 Series cars including the fully electric vehicles. The production avatar of the new XC40 stays true to the Concept 40.1. The SUV also shares most of the design elements from the XC90, especially at the front and rear profiles. Though, the compact crossover manages to look different from its elder siblings with elements such as tall taillights, sporty rear bumper and spoiler.

Sporting a futuristic design language, the SUV gets signature Thor’s Hammer headlamps with integrated DRL (daytime running lights) and 18-inch alloy wheels as standard. What further adorn its aggressive front styling are the chromed grille, prominent bumper and a well-sculpted bonnet. The car also features a contrasting colour glass roof and badging on the front and back. The R-Design variant comes with the five-spoke, 18-inch alloys and a blacked-out roof and mirrors. The L-shaped brake lights are carried over from the concept. It also gets deeply sculpted doors. Read – All Volvo Cars To Get Electric Motor Option From 2019

Other design highlights include flared wheel arches, nice elegant lines, new headlamps with DRLs, etc. The silhouette and shape of the car is similar to its larger siblings – XC60 and XC90, but with compact dimensions. Volvo is offering the SUV in three dual-tone exterior finishes – Blue or Black with a White top and Red with a Black top. 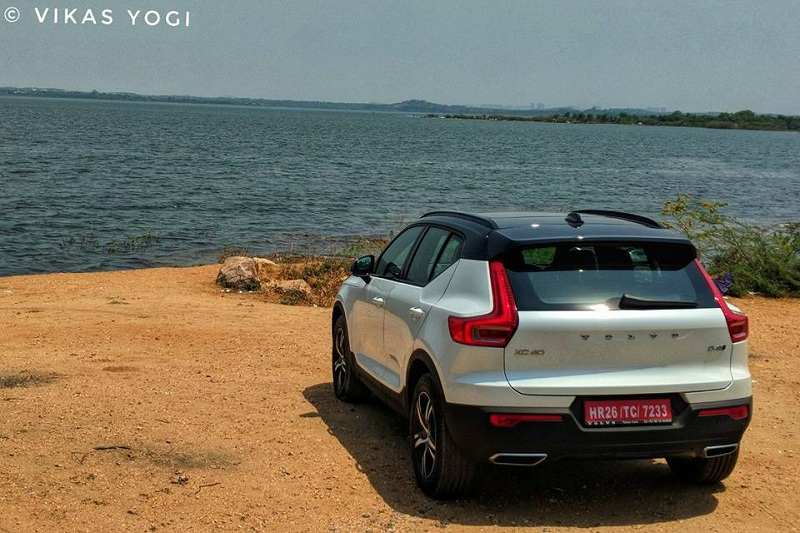 Besides sharing its design bits with the bigger XC60 or XC90s, the all-new Volvo XC40 borrows its interior features with its donor siblings. Volvo makes use of the plush materials and equips the car with a wide range of high-tech features. The uncluttered centre console features Volvo’s 9.0-inch portrait touchscreen infotainment system, which is compatible to smartphone apps such as Android Auto and Apple CarPlay. Features such as a 750-wattt, 12 speaker Harman Kardon music system, a panoramic sunroof, digital instrument display and rear parking assist are also on offer.

The dashboard features control dials with chrome surround on both side and it also has several in-car controls. The SUV sources the three-spoke multi-functional steering wheel from other XC’s, but it doesn’t get paddle shifters. The XC40 is the first Volvo to feature the ‘Care by Volvo’ subscription service that provides “digital concierge services”. The R-Design variant features sporty aluminium inlays, perforated leather finish on gear lever and steering wheel and leather seat upholstery. It also gets a ‘Sports chassis’ with stiffer springs that will enhance its drivability. 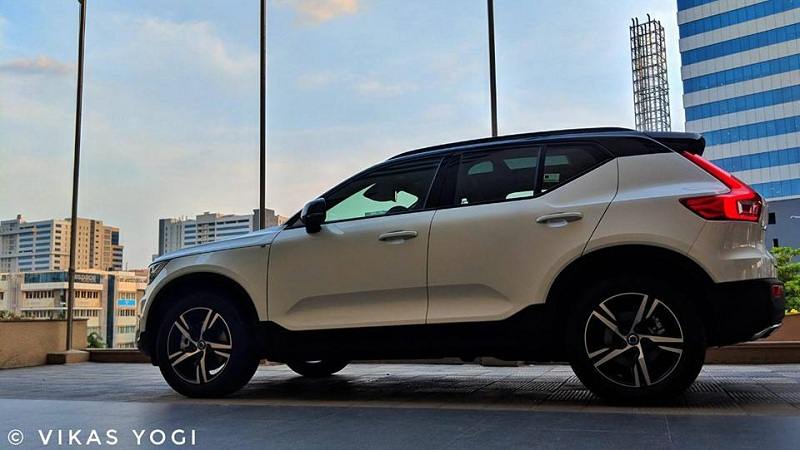 This five-seater premium SUV has a wide centre armrest for the driver and co-passenger. It also offers several cubby holes. There are multiple highly functional storage spaces including the centre console tunnel with small storing compartment, foldaway hook and storage space under the front seats. The removable bin and card slots on the dashboard create more storage space. In fact, the SUV gets a smart floor system providing ample luggage area.