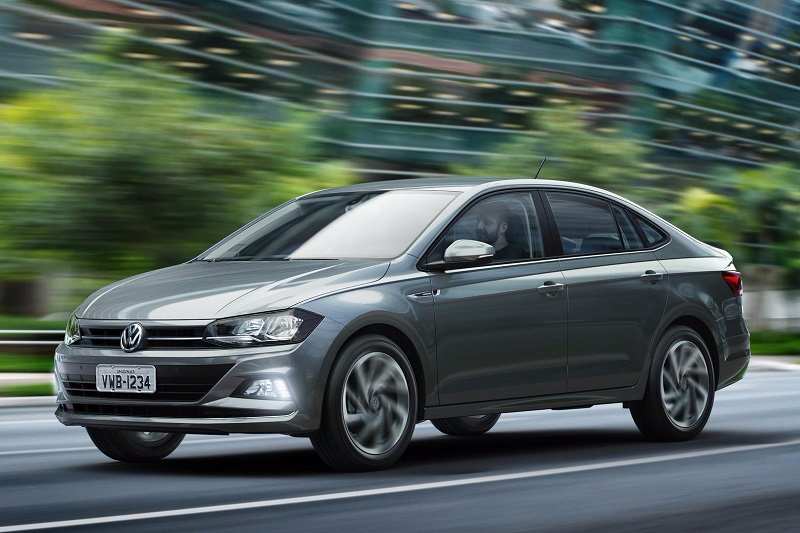 Based on Volkswagen Group’s MQB-A0 platform, the new Volkswagen Virtus sedan will replace the Vento sedan.

Volkswagen, the German premium carmaker has officially revealed the long-awaited Volkswagen Virtus mid-sized sedan. It is based on the VW Group’s MQB-AO platform that also underpins the new generation Polo hatchback. This sedan will come as a replacement for the Polo sedan or Vento in several international markets. It will first go on sale in the Brazilian market in January 2018, followed by other markets. Apart from sharing underpinnings with the new Polo, the mid-sized sedan has been heavily inspired by the hatchback in terms of styling and features. In the Brazilian market, the sedan will take on the likes of Chevrolet Prisma, Honda City, Toyota Yaris sedan and the upcoming Fiat Cronos.

It is the second Volkswagen product to be developed on the MQB A0 platform, first being the new Polo. The German automaker is also working on a compact SUV – T-Cross Breeze – which will also use this flexible platform. In terms of size, the new Virtus is slightly larger than the current Vento, albeit the sedan will carry same engines as on the new-gen Polo. It has a large wheelbase of 2,650mm, which is around 80mm more than that of the Polo. Thanks to the increased wheelbase, the sedan now offers a large boot space of 521-litres. The front styling and front doors seems largely identical to the new Polo, but the increased wheelbase makes the rear doors larger. The sedan features sloping roofline and Areteon sedan inspired boot design and wrap-around taillights. Read More – New Volkswagen Polo Hatch Revealed

The sedan is likely to replace the current Vento in India that underpins the PQ25 platform. If it comes to India, it will rival the likes of Honda City, Hyundai Verna, Maruti Ciaz and other in its league. The new Virtus is lighter in weight compared to Vento and will aide improved mileage as well as better driving dynamics. The global model is available with two engine options – 117bhp, 1.6-litre four-cylinder petrol and 128bhp, 1.0-litre turbocharged engine. Transmission options include a five-speed manual and a six-speed automatic unit. 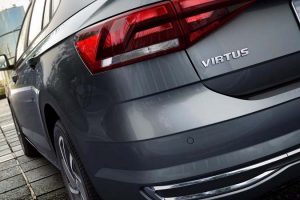 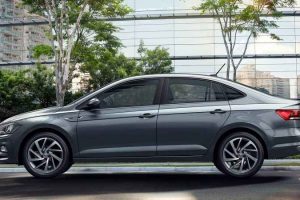 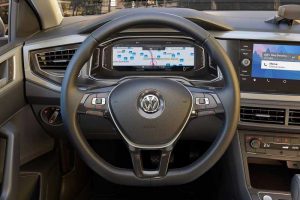 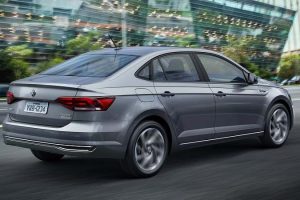 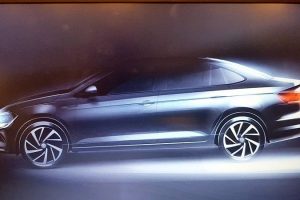 The German conglomerate has finally revealed the new Virtus mid-sized sedan, which is based on the versatile MQB-AO platform. The company has confirmed that the new model will first go on sale in the South American markets in January, followed by other markets in late 2018. It is quite early to comment whether this sedan will go on sale in India, but media reports suggest that VW’s sibling company, Skoda is working on a ECO platform for Indian market. The next Virtus for India could be developed on this platform and launch could take place in late 2019 or 2020.

Unlike the current generation model based on the PQ25 platform, the new Virtus will be developed on the new MQB-A0 platform that also underpins the new-gen Polo. Sitting on the new underpinnings, Virtus is slightly longer and will have a longer wheelbase than the outgoing Vento sedan. With most of the cues taken from the new-gen Polo, we expect the Honda City rivalling sedan to be priced between Rs 10 lakh to Rs 15 lakh. Read More – Volkswagen T-ROC Compact SUV Revealed

Volkswagen has released engine details of the global model, which will be launched in January 2018 in South America. The 2018 VW Virtus comes with two engines – a 1.6-litre, four-cylinder petrol and a 1.0-litre, 3-cylinder turbocharged petrol. Coupled to a five-speed manual gearbox, the naturally aspired unit is capable of producing 117bhp of power and 162Nm of torque. On the other side, the turbo unit churns out 128bhp of power and 200Nm of torque and is paired to a 6-speed manual gearbox.

In India, the replacement for Vento sedan is expected to be introduced with three engine options including the 1.4-litre TSI petrol, 1.5-litre TDI and 1.2-litre petrol unit. The 1.4-litre EA-211 turbocharged engine with 125bhp and 200Nm torque is likely to replace the 1.6-litre TSI unit. Diesel version on the other hand is likely to retain the 1.5-litre TDI unit good for 108bhp and 250Nm of torque. While the performance oriented version will get the 1.2-litre turbocharged engine with 103bhp of power and 175Nm torque. Transmission options on the carline could include a 6-speed manual and a 7-speed DSG automatic gearbox. Read More – Volkswagen T-Cross Breeze Compact SUV To Challenge Hyundai Creta

Considering that Virtus could get the 1.2-litre petrol, 1.4-litre petrol and 1.5-litre oil burner, it is expected to return decent fuel economy, since these engines currently serve in other VW models. The lower kerb weight is likely to improve the fuel economy with the petrol trims estimated to return up to 15kmpl and the diesel version rated at 17kmpl.

Based on the new MQB AO platform, the new sedan sits on a 2,650mm long wheelbase. The wheelbase is around 80mm more than that of the new gen Polo hatchback and is similar to the current Jetta. It measures 4.48mm in length, 1,751mm wider and 1,468mm taller. The sedan has a luggage carrying capacity of 521-litres, which is more than sufficient to carry your weekend bags.

Volkswagen currently seels Polo sedan or Vento in India, which is primarily a sedan version of the hatchback. The Virtus sedan will replace Vento and Polo sedan in international markets and takes comprehensive design cues from the new-generation Polo hatchback. This sedan looks more premium and feature-loaded than the Vento. As for the styling, Virus borrows most of its styling cues from the hatchback sibling. Though, it will have subtle design changes that give it a fresh look on the outside. It is based on VW’s new design language that is currently used in other models like Passat, Tiguan and Golf.

Visually, the 2018 VW Virtus has the same front styling as the Polo, though there are subtle changes to make it look slightly different than the hatchback sibling. Features like slimmer headlamps with integrated angle running lights, front grille, doors and windshield will be directly lifted from the new Polo. However, the bumper design is slightly different and has lot more creases and curves that gives it a sporty feel. In the rear, the Virtus has different design, which will also be on offer in the next-gen Jetta. As a reminder, the next-generation VW Jetta will make its global debut at the Detroit Auto Show in January. It comes with sloping roofline and higher positioned boot-lid that gives it an elegant profile. The boot design and LED wraparound tail-lights seem inspired from the Areteon sedan. 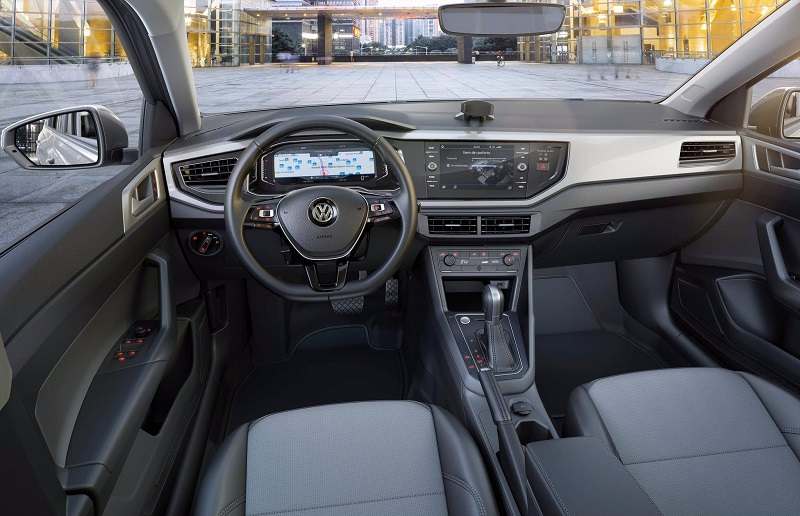 As mentioned above, the new Virtus is based on the new MQB AO platform that also underpins the new Polo. Thanks to new platform, the new model sits on a longer wheelbase that translates into spacious cabin. Adding to it, the slightly increased length and width will altogether provide more space on the inside. The top-end model is available with all-digital 10.25-inch active info display on the dashboard and 8-inch touchscreen infotainment system, which is compatible with MirrorLink, Android Auto and Apple CarPlay. In terms of styling and features, Virtus is a mirror image of the new-gen Polo. Among the various goodies, it gets a touchscreen infotainment system, automatic climate control, leather seats and a multi-functional steering wheel.