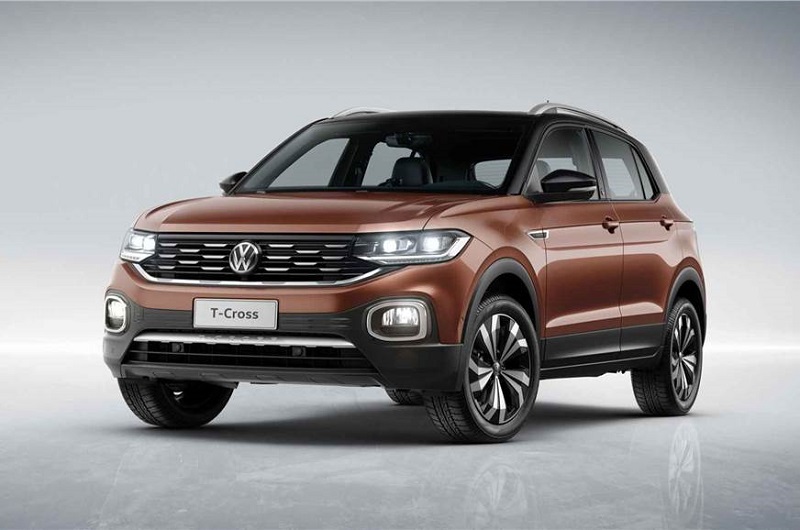 To be based on heavily localised MQB AO IN platform, the Volkswagen T-Cross SUV will go on sale in India in 2020

Volkswagen Group has announced to launch a range of new cars in India from 2020-22. German brand will launch a range of new SUVs internationally as well as in the Indian market in the next few years. To start a new journey, Volkswagen will launch an all-new entry-level SUV – Volkswagen T-Cross. This SUV has finally made its debut and will soon go on sale in the European markets. Underpinning Volkswagen Group’s MQB-AO platform, the Volkswagen T Cross is essentially based on the new gen VW Polo hatchback and it is the smallest SUV from the German carmaker.

For people not in the know, Volkswagen Group has announced to develop a low-cost MQB AO IN platform for Indian market. Skoda will produce this platform and it will be used to develop a range of new VW and Skoda cars for Indian market. The India-spec Volkswagen T-Cross will be based on this platform and is scheduled to be launched in 2020. Just to jog your memory, VW had showcased the Up! platform based sub-compact SUV concept – Taigun – for growing markets at the Delhi Auto Expo 2014. However, VW scrapped this SUV due to high development cost. Now, the company is planning to launch the T-Cross SUV to challenge the likes of Hyundai Creta and Renault Captur.

For the European markets, the T-Cross is being offered with 2 engines – 1.0-litre 3-cylinder turbocharged petrol and a 1.6-litre 4-cylinder diesel. The India-spec model will receive a locally-developed 1.0-litre turbo petrol engine that produces 113bhp of power. Both manual and automatic versions will be on offer.

Volkswagen Group will launch three new Skoda and three Volkswagen cars in the Indian market. The first model from VW will be the T-Cross SUV that will be stacked up against the Hyundai Creta and Renault Duster.  While the European launch will take place in the end of 2018 or early 2019, the India launch will take place in 2020. It is expected that the production-ready T-Cross could make its India debut at the 2020 Delhi Auto Expo.

Volkswagen’s new compact SUV will be based on the heavily localised MQB AO IN platform, which will also underpin a range of new Skoda and Volkswagen cars for India. The higher level of local components and locally developed engine will help the German maker to achieve aggressive pricing. The Volkswagen T-Cross price in India is expected to start from Rs 12 lakh for the base model and Rs 16 lakh for the high-spec trim. If launched at this price point, it will compete with Hyundai Creta and Renault Duster. Some upcoming new models such as Nissan Kicks and Skoda Vision X-based SUV will also give a tough fight to the vehicle. 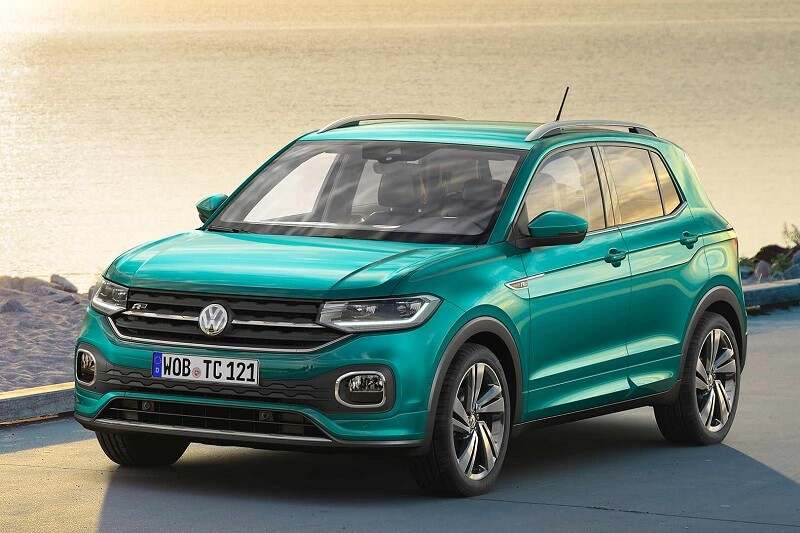 First unveiled at the 2016 Geneva Motor Show as a drop-top mini-SUV concept, the T-Cross production model comes with a fixed roof, large roof rails and five-door. The SUV shares design bits with the T-ROC SUV. In fact, it looks like a smaller version of the T-ROC. Sporting SUV-ish and bold stance, the T-Cross gets the signature VW’s grille that we have already seen on bigger Tiguan and T-ROC. The model gets wider headlamps that merge with the grille and a thin chrome outline below the grille that merge neatly with the LED DRLs. The bumper looks aggressive, thanks to body cladding at the bottom with a faux aluminum panel at the centre. The front also gets subtle chrome touches, which gives it a premium look.

Towards the side, the SUV gets large roof rails, pronounced wheel arches and a high ground clearance. The SUV gets a thick body cladding that runs across its sides. It rides on large 17-inch alloy wheels. At the back, the VW T-Cross features C-shaped tail-lamps with LED elements and a horizontal lightbar that runs across the tailgate. Read – 2018 Volkswagen Polo GTI Revealed 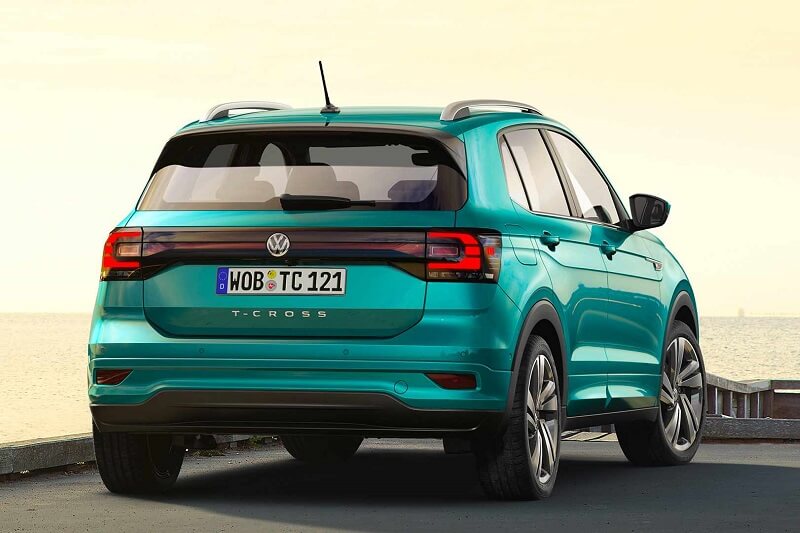 In terms of proportions, the new VW T-Cross is 4.19 meters in length, 1.79 meters in width and 1.56 meters in height. The SUV rides on a 2.65 meters wheelbase. Interestingly, the SUV comes with sliding rear seats that can slide 14cm to boost cargo space. As standard, the SUV gets 385-litres of boot space which can be increased to 455-litres by sliding the rear seats forward. In fact, the rear seats can be fully-folded down to increase the boot space up to 1,281-litres. Moreover, the company is also offering an optional front folding passenger seat. Read – Volkswagen Virtus Sedan To Replace Vento In India

The cabin of the SUV shares design with the likes of Virtus and Polo, but the quality has been improved. The base variant of the T-Cross gets basic features like simple music system, height adjustable driver’s seat and power windows. Mid-level variants come equipped with multi-functional steering wheel, front and rear parking sensors, air conditioning, etc. Read: New Volkswagen Passat – All You Need To Know 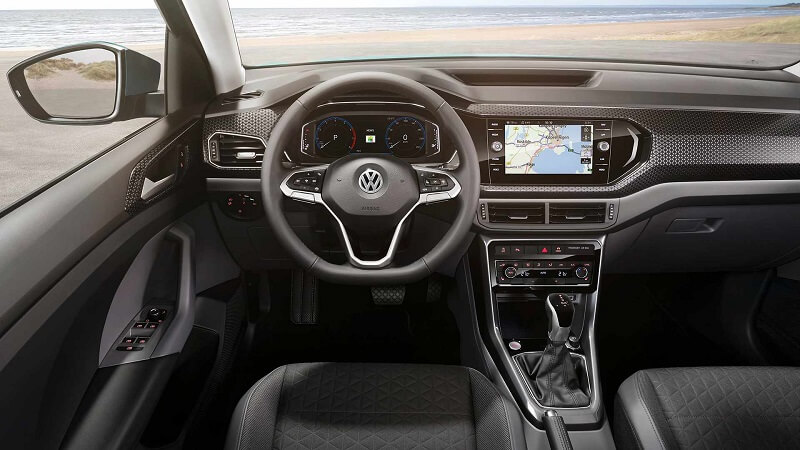 For the European markets, the Volkswagen T-Cross is available with 2 engine options – 1.0-litre 3-cylinder turbocharged petrol and 1.6-litre 4-cylinder diesel. The petrol engine offers two states of tunes – 94bhp and 113bhp. The oil burner is good for 94bhp. In near future, the SUV will also receive a gas-fueled 1.5-litre 4-cylinder turbocharged engine that offers 148bhp of power. Transmission options will include a 5-speed manual, a 6-speed manual and a 7-speed dual-clutch. All versions of the Volkswagen T-Cross are front-wheel drive. Check Out – Volkswagen T-ROC SUV Picture Gallery 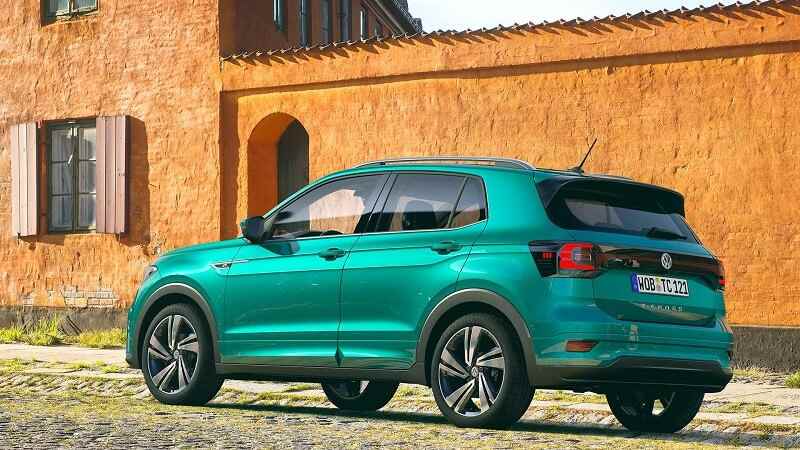 In India, Volkswagen will launch the T-Cross in petrol avatar only. The 1.0-litre turbocharged petrol engine is expected to deliver around 17-19kmpl of fuel efficiency.

Measuring 4.19 meters in length, the VW T-Cross will also make its way to the Indian market. Though, its launch is likely to happen by 2020. In the premium SUV segment, Volkswagen’s new SUV will give a tough fight to the Hyundai Creta. It will also lock horns against the Renault Duster and Captur, Ford EcoSport and Jeep’s upcoming Renegade SUV.