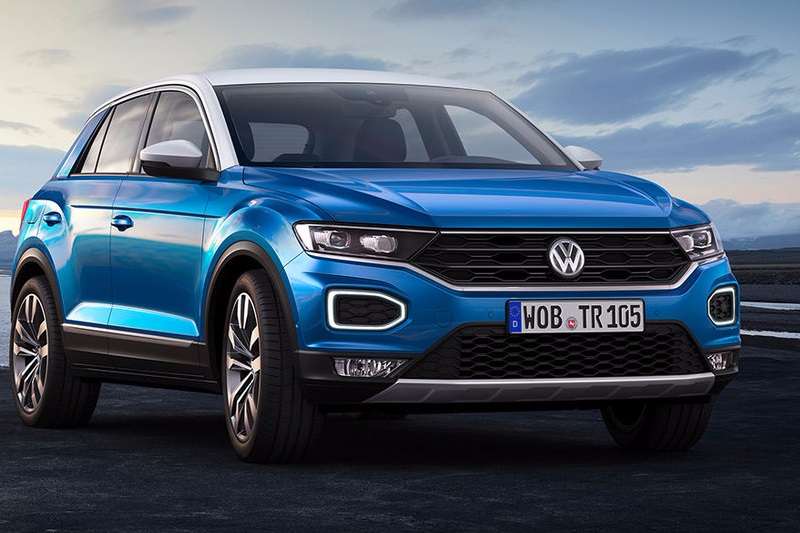 Set to make a public debut at 2017 Frankfurt Motor Show, the new 2018 VW T-ROC SUV will go on sale in December this year

After numerous concepts, teaser images and sketches, Volkswagen has finally revealed the long-awaited Volkswagen T-ROC SUV. Based on the seventh-generation Golf platform, the new VW T-ROC SUV will be the smallest crossover from the German carmaker in the US market. It will first go on sale in UK market in December, while the production of the SUV is scheduled to kick off towards the end of this year. This crossover will directly rival the likes of Mini Countryman, Nissan Qashqai and Toyota C-HR. As of now, the German carmaker has no plan to bring in it in the Indian market. A near-production version of the T-Roc was first teased at the 2017 Geneva Motor Show. As a reminder, the T-ROC concept was first previewed at the 2014 Geneva Motor Show.

This SUV will make its public debut at the 2017 Frankfurt Motor Show. Designed on the VW Group’s MQB modular platform, the Volkswagen T-Roc shares some of its design and styling cues with the Audi Q2; however, the latter one is sportier with a coupe-like roofline. The production version of the VW TROC SUV looks completely different from the concept version that broke cover at the GIMS 2014. While the concept version was a 2-door convertible, the production version is a proper 5-door SUV. Some of the key design elements include sharp headlamps, hexagonal grille, honeycomb mesh wide air dams, stylish bumpers, horizontally positioned fog lamps and body coloured panels and LED tail lamps. Also Read – Upcoming Volkswagen Cars In India

With 5-seats configuration, the VW T-ROC is claimed to offer a spacious and feature-loaded cabin. The SUV measures 4,234mm in length, 1,819mm in width and 1,573mm in height and has the wheelbase of 2,603mm. On the inside, the T-ROC shares dashboard with the Golf hatchback, but it gets new coloured trim. It will get a new 11.3-inch active info display with digital instrument pack and floating dashboard. The SUV also gets a 8.0-inch touchscreen infotainment system that is compatible with Apple CarPlay, Android Auto and MirrorLink. 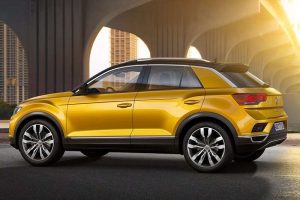 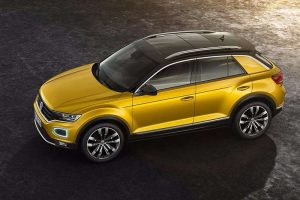 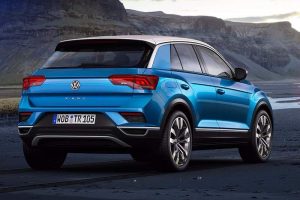 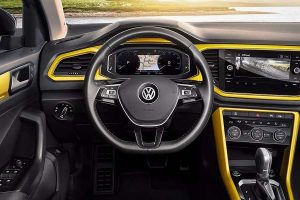 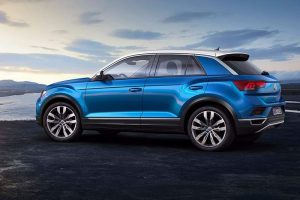 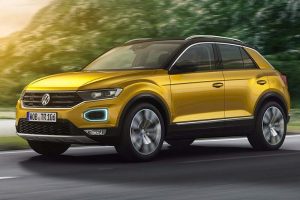 As mentioned above, the new Volkswagen SUV is based on Volkswagen Group’s MQB platform that also underpins the Tiguan SUV. Unlike the concept that features a 3D radiator grille designed with large honeycomb shaped openings, the production-ready VW T-ROC sports a large hexagonal grille with chrome slats, flanked by thin headlamps with LED daytime running lights (DRLs). Interestingly, the LED daytime running lamps and cornering lights are positioned on the lower bumper. The DRLs also work as indicators, as it changes to an orange shade when the turn signals are in operations. The wider air-dams gets honeycomb mesh design and the bumper gets horizontally positioned fog lamps. The muscular wheel arches accentuate its sporty side profile sharing resemblance to the Audi Q2. While the latter one has a coupe-line profile, the former features a fixed flatter roof. 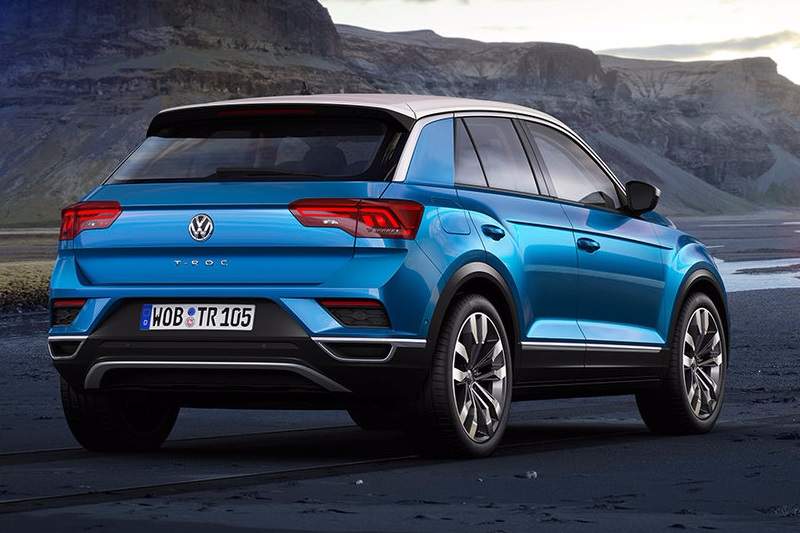 The SUV features aggressive creases running across the length. There is a swage line that runs back above the door handles and a chrome trim element that extends from the A-pillar over the entire side of the roof and merges into the base on the wide C-pillars. The vehicle also gets two-tone paint scheme, with contrasting colour offered on the roof section, A-pillars and exterior mirror housing. The concept showcased was a 2-door SUV featuring large windscreen, large roof spoiler and rear windscreen. There is an aluminium strip on the C-pillars, which add to its styling. Carrying a roof mounted spoiler, nicely designed LED tail-lamps and aggressive bumper, the rear profile of the SUV looks sporty. The concept model was equipped with three-dimensional LED lights and high gloss black boot lid and rear spoiler. It also gets “Cool Granite” plastic cladding adding more to its sporty character. Read – Volkswagen T-Cross Breeze Compact SUV Is Coming To India 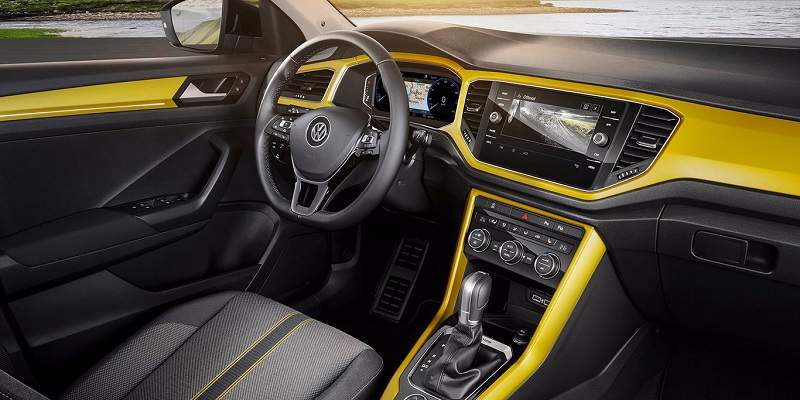 While the T-ROC concept was a 4-seater, the production version comes with a 5-seat configuration. Most of the interior design elements and features are carried over from the Golf hatchback. The compact SUV comes equipped with a floating dashboard, which is similar to its hatchback sibling. However, the dashboard gets new coloured trims to give it a refreshing look. It sports Volkswagen’s new 11.3-inch active info display digital instrument pack and an 8.0-inch touchscreen infotainment system with gesture control. This system is compatible with Android Auto, Apple CarPlay and MirrorLink. Adding to it, the SUV has an inductive smartphone charge plate and a 300-watt, eight-channel Bose sound system. Other key features include a multi-functional steering wheel, leather seats, automatic climate control and rear AC vents, etc.

Volkswagen will launch the new T-ROC compact SUV with a choice of three petrol and 2 diesel engines. The petrol version of the SUV is offered with three powertrain options – 1.0-litre TSI, a new 1.5-litre TSI and 2.0-litre TSI. While the smaller capacity engine is capable of producing 117bhp and 271Nm of torque, the 1.5L unit is good for 152bhp of power and 339N of torque. The range-topping 2.0-litre TDI motor churns out 193bhp of power and 434Nm of torque. As a reminder, the concept model was equipped with a 2.0L turbo-diesel direct injection engine churning out power worth 181.4bhp (184PS).

The diesel engines include an 117bhp, 1.6-litre 4-cylinder and a 2.0-litre turbodiesel engine that offers two states of tunes – 152bhp and 193bhp. A 6-speed manual gearbox will be offered on the lower variants, while a 7-speed DSG automatic unit with a 4MOTION AWD system will be restricted to the top-spec trims. The new Volkswagen compact SUV also offer three different driving modes: Street, Off-road and Snow. The parameters of the 4Motion drive train, 7-speed DSG (dual-clutch gearbox), ABS, Hill Start Assist and Hill Descent Control vary depending on the mode selected.

It would be quite early to comment whether the Volkswagen T-ROC SUV will make its way to India or not. If it comes to India, the new T-ROC is estimated to fall in the price range of Rs 16 lakh to Rs 22 lakh (ex-showroom). The SUV will enter production by the end of this year, and its global launch will take place in December 2017. In the VW’s global product lineup, the VW T-ROC will be positioned below the Tiguan SUV. 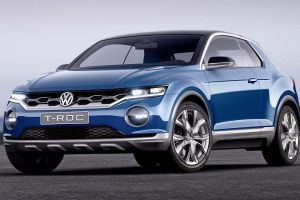 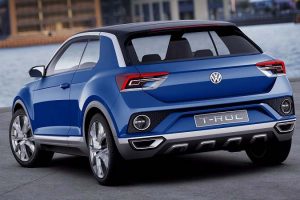 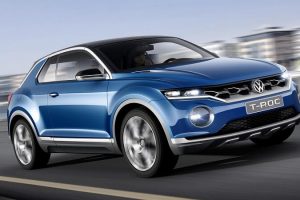 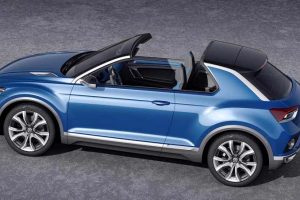 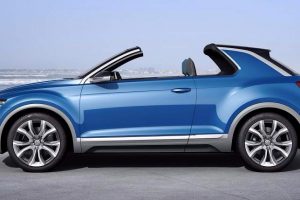 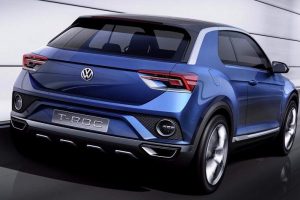