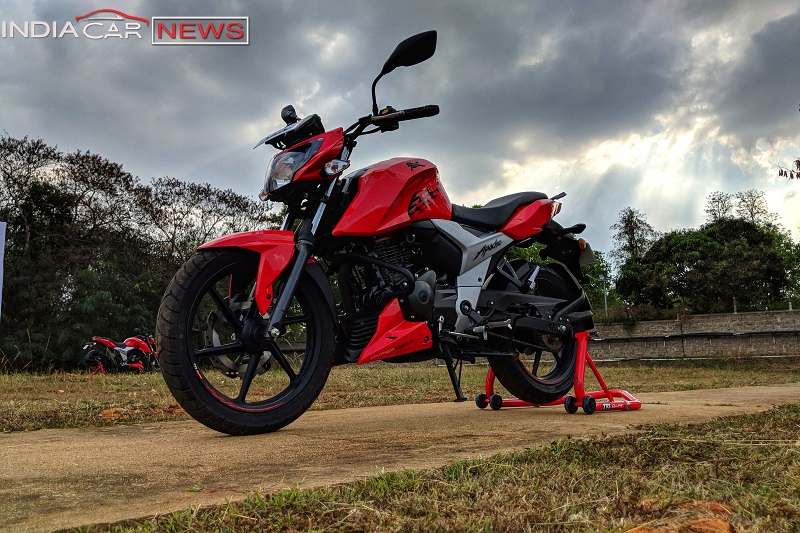 First launched in 2006, TVS Apache 160 has been one of the most popular motorcycles in its category. In order to further improve its sales, TVS has introduced the all-new Apache RTR 160 4V in the Indian market. Available with two engine variants – carburettor and fuel injection – the new Apache is aiming at newly launched Pulsar 160NS and the Gixxer. We recently got over chance to test this motorcycle at the company’s Hosur based test track facility.

Apache 160 is already an handsome looking motorcycle, but with new design it looks way modern. The styling of the new model is inspired from its elder sibling – the Apache RTR 200 4V. In fact, the front of both bikes look exactly same which is a good thing. It looks way more aggressive than the previous model, featuring boomerang-shaped LED daytime running lights and compact fairing. Also Read – TVS Apache RTR 160 4V – five things to know 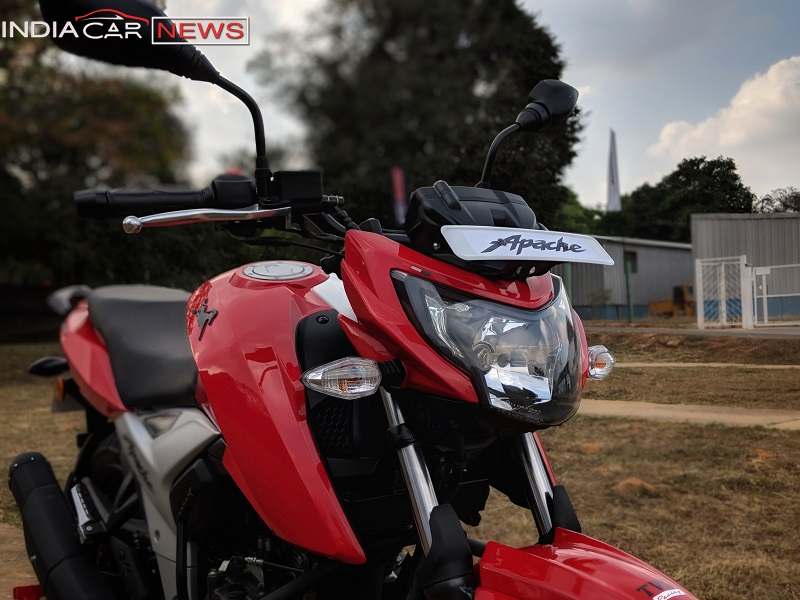 Side profile too looks similar to its bigger sibling, except for the few subtle changes. The fuel tank now features new body graphics (chequered flag) that signifies its racing DNA. Instead of split seats, it features the single-piece unit to offer comfortable ride for both rider and pillion. Other features include new seat cowls, new exhaust muffler and new body panels with contrast shade. 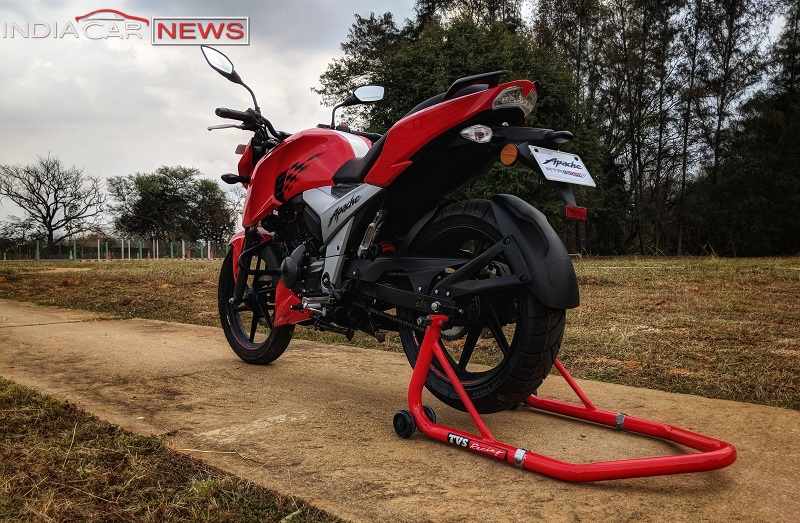 The rear too looks similar to the Apache RTR 200 4V, featuring similarly designed LED tail-light. The handlebar is a conventional single piece unit for more upright position. While the previous model comes with part-analogue and part digital instrument console, the new Apache RTR 160 4V gets an all-new digital console. The console in the FI version gets gear-shift indicator and a lap time, however, these features are missing on the carburettor variant’s panel. In terms of fit and finish, the motorcycle gets good quality materials and switch gear has also been sourced from the RTR 200 4V. Also See – New TVS Apache RTR 200 4V Race Edition 2.0 Launched; Gets Slipper Clutch 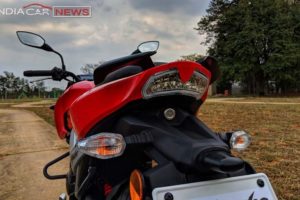 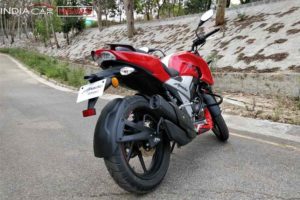 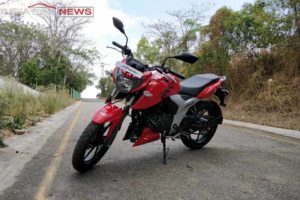 The new Apache RTR 160 4V now features the most powerful engine in its league. It is powered by an all-new 159.7cc single-cylinder, air-cooled engine with an oil cooler for better heat management. It is available with two versions – carburettor and fuel-injection. While the carb variant offers 16.5bhp, the FI model is rated at 16.8bhp. Torque figure remains identical for both variants, rated at 14.8Nm. The engine has 4-valve head, which allows it to breathe better. The better air-pumping results into better combustion efficiency, which translates into better fuel efficiency and performance. As I tested the carburettor model first, and the first thing I noticed is that the engine offers enough power on lower and mid-revs. However, the top-end of carburettor version could have been better. 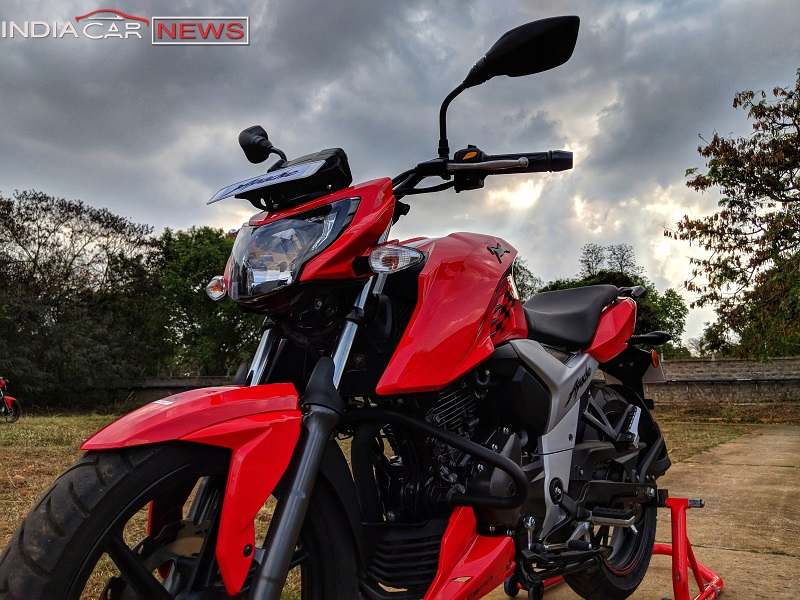 On the flip side, the fuel-injected version has better mid and high-end. Though, I felt the bike took its own time to pick-up speed on lower gearshifts. While the FI model offers better throttle response and refinement, the carburettor model is more fun-to-ride. I managed to hit a top speed just over 110kmph, though there was enough power left in the bike to cross the claimed 114kmph. The first 4 shifts come with short gear ratios, but the fifth gear has bigger ratio that offers more power on higher revs. There is vibrations post 7,000rpms, which constantly grows on higher revs. Also See – TVS Apache RTR200 Fi Ethanol Showcased At Auto Expo 2018

The motorcycle has a balanced ride position. While the flat handlebar offers upright and relaxed position, the slight-rear set foot pegs give it a sporty character. The bike is way more stable than the previous model, and the biggest reason behind this is the new and stiffer double-cradle split-frame chassis. With longer wheelbase and monoshock rear suspension unit, the motorcycle turns into corners with more stability. However, it does not feel as flickable as the previous model. The bike rides on 17-inch alloy wheels wrapped with TVS Remora tyres, which offers decent grip. While the disc variant gets 130/70 section rear tyre, the drum variant has 110/80 section tyre. The braking system feels adequate; however, the high-speed braking could have been better. 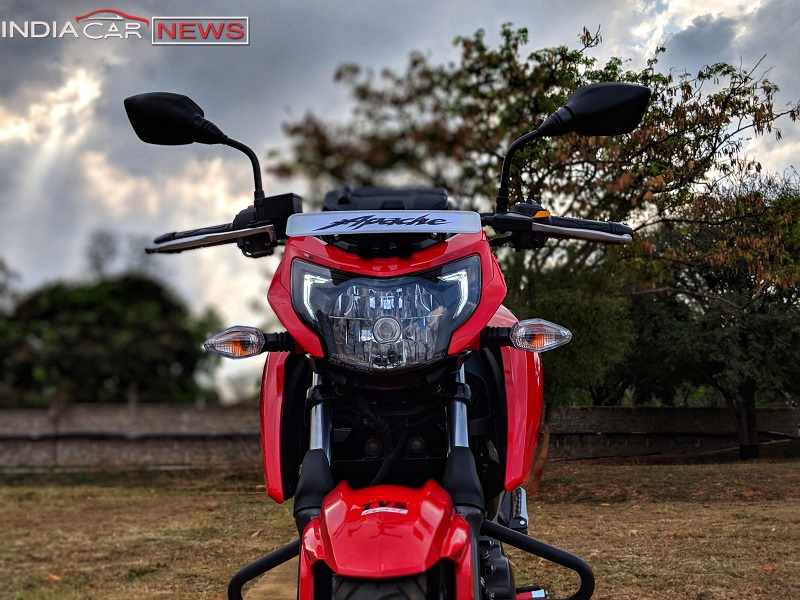 With new design, features and more powerful engine, the new Apache RTR 160R feels way better and mature than the previous model. It comes with aggressive styling, a punchier engine and offers excellent ride and handling. However, there are vibrations post 7,000rpm and high-speed braking could have been improved. Overall, it is currently the one of the most likable 160cc motorcycles on sale in India.