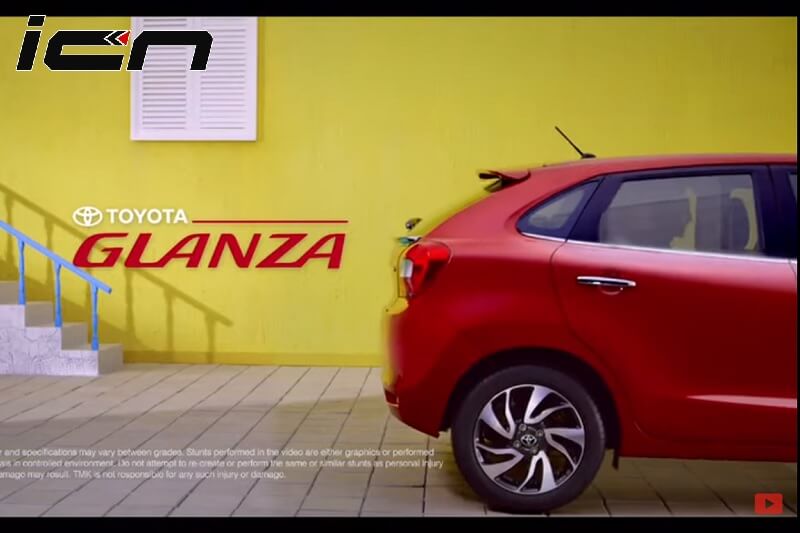 The Toyota Glanza hatchback will be available with two variants – a mid-spec G and the fully-loaded V.

Japanese automaker, Toyota has officially released a new teaser of the upcoming premium hatchback. It is now official that the upcoming hatchback will be called the Toyota Glanza. For people not in the know, the Glanza is basically the re-badged Maruti Baleno hatchback. The teaser shows the Toyota Glanza’s rear right fender and alloys similar to that of the Maruti Suzuki Baleno, but it has Toyota badging.

The Toyota Glanza hatchback will be available with two variants – a mid-spec G and the fully-loaded V. The hatchback will only be offered in petrol version. It will be powered by a 1.2-litre K-Series engine that produces 83bhp and 115Nm of torque. The company could also use the newly introduced 1.2-litre DualJet petrol with SHVS mild-hybrid system. Transmission options are likely to include a 5-speed manual and a CVT automatic. Also See – Toyota Glanza launch likely on June 6, 2019

The Toyota Glanza will be positioned slightly higher than the donor sibling – Maruti Baleno. The hatchback will share all the body panels and styling elements from the Baleno, though it will come with new grille and revised bumper to offer Toyota’s family look. The cabin is also likely to be shared with the Baleno, but the Glanza could receive different seat upholstery and colour scheme. It will be fitted with a touchscreen infotainment system with Android Auto and Apple CarPlay support, climate control, multi-functional steering wheel, reverse camera, etc.

The Toyota Glanza will have dual front airbags, ABS with EBD, brake assist, rear parking sensors, seat belt reminder and speed alert as standard safety features. Similar to the existing Toyota cars, the upcoming Glanza is expected to come with a standard 3 year/ 1 lakh km warranty. It is the first product from the Toyota and Suzuki joint venture in India. Apart from the Glanza, Toyota will also launch the re-badged Ciaz, Ertiga and the Vitara Brezza in India. Adding to it, the two are also developing an all-new C-segment MPV.