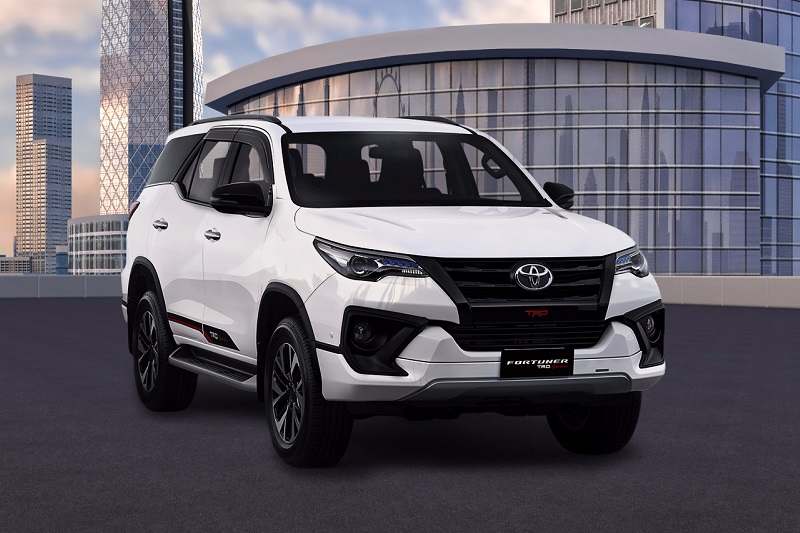 The new Toyota Fortuner TRD Sportivo is powered by a 2.8-litre GD diesel engine paired to a 6-speed AT gearbox.

Toyota Kirloskar Motor has finally launched the new Toyota Fortuner TRD Sportivo in the Indian car market. This is basically the sportier edition of the popular new gen Fortuner SUV, which was launched last year in the country. With this edition, the Japanese automaker is aiming to en-cash on the upcoming Festive season, Diwali. The new edition is available in the 4×2 AT version, and in pearl white color. Priced at Rs 31.01 lakh (ex-showroom, Delhi), the Fortuner TRD Sportivo is designed and developed by Toyota Racing Development.

Commenting on the launch, Mr. Akitoshi Takemura, Senior Vice President, Toyota Kirloskar Motor Pvt. Ltd said, “Fortuner has proven to be a “True SUV” well recognized for its best in class durability, on-road comfort and off-road prowess. The 2nd generation Fortuner has also continued this legacy with its distinctive, sleek and powerful design backed by improved driving dynamics has received tremendous response ever since its launch in India last year”.

The TRD (Toyota Racing Department) Sportivo variant production has already been started at the company’s Karnataka based plant. As a reminder, the 2017 Toyota Fortuner TRD Sportivo variant is already on sale in select Asian markets including Indonesia. The previous generation Fortuner was also offered in TRD version. However, the company didn’t launch this version with the new generation model, which was introduced last year. This variant is powered by a 2.8-litre diesel engine and a six-speed automatic gearbox with paddle shifters. It is capable of producing 174bhp of maximum power and 420Nm of torque.

The new model is equipped with Toyota’s TRD Sportivo kit, which makes it look sportier than the regular car. There is no change mechanically or even on the suspension. Talking about features, the SUV comes equipped with new front bumper spoiler, rear bumper spoiler, TRD inspired Exterior accents and TRD Spotivo Badge. It features a TRD grille, which has been finished in black and has the TRD logo in red. The flared wheel arches have been fitted to large 18-inch TRD alloy wheels. Adding to it, the SUV has new fog lamp assembly with black shade and new skirting. On the side, the TRD Sportivo variant gets side skirts and TRD graphics that is also offered into the rear bumper. The cabin design is similar to the existing model, except for the new sporty Red stitch accents on the interior. Also Read – Toyota Fortuner Vs Jeep Compass

This version is offered on the 4×2 Automatic variant of the regular Fortuner. Government of India has revised the GST rates for the larger vehicles and SUVs, which makes the regular model around 10-15% pricier. Equipped with TRD kit and 2.8-litre Diesel engine, the new Fortuner TRD Sportivo is priced at Rs 31.01 lakh (ex-showroom, Delhi).

The Fortuner TRD Sportivo is powered by a 2.8-litre GD diesel engine that also powers the regular model. This engine is capable of producing a maximum power output of 174.5bhp at 3,400rpm and a peak torque of 450Nm between 1,600-2,400 rpm. Power is transmitted to the rear wheels via a six-speed automatic gearbox with paddle shifters. Also See – Toyota Fortuner Vs Ford Endeavour Video

Equipped with the same 2.8-litre GD diesel engine, the new TRD Sportivo delivers around 10kmpl of mileage in real world. It is claimed to return an ARAI certified fuel economy of 12.9kmpl. 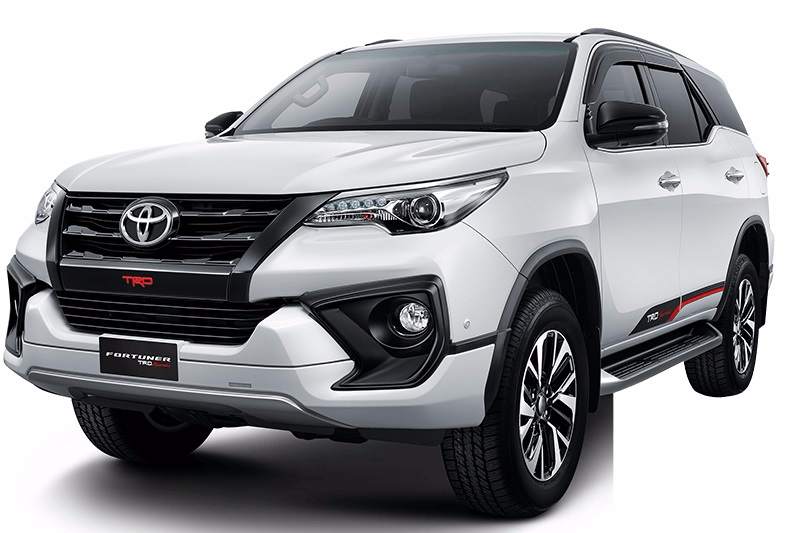 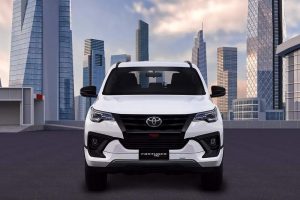 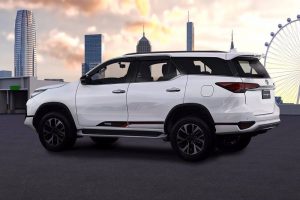 Dimensionally, the new Fortuner TRD Sportivo is 4,795mm in length, 1,855mm in width and 1,835mm in height, and has a wheelbase of 2,745mm. It comes with a ground clearance of 225mm, which is more than sufficient to tackle Indian road conditions.

The new model only gets visual makeover. There is Toyota’s TRD Sportivo kit on offer, which gives it a sportier look. However, there are no mechanical changes under the hood. It gets a blacked out roof and pillars, blackened grille and new fog lamp assembly with black paint, etc. Other features include new exhaust tips, TRD branding on the seats and exterior of the car. The flared wheel arches will be fitted to a newly developed 18-inch alloy wheels.