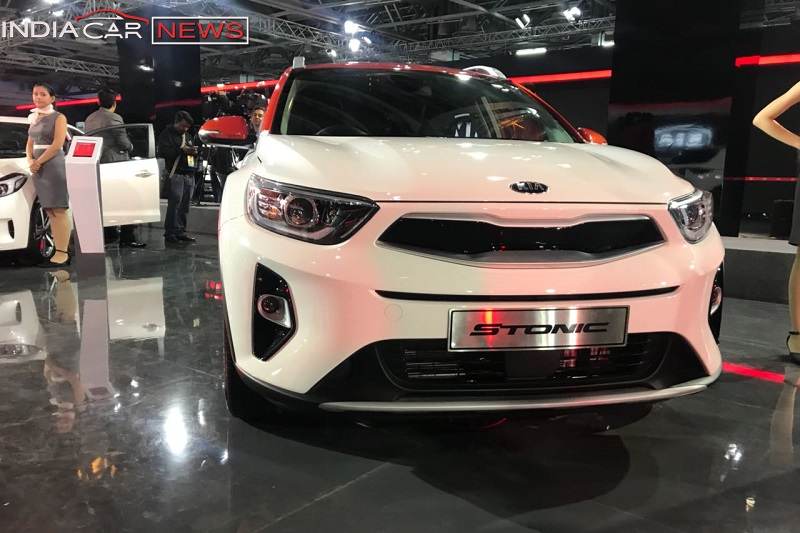 Based on Hyundai Kona’s platform, the new Kia Stonic will rival Nissan Juke and Honda HRV in global markets.

Keeping growing demand for SUVs in mind, Kia has opted its global SUV range for debut at the 2018 Delhi Auto Expo. The company has revealed the India-specific SP Concept SUV, which will enter into production in 2019. Besides SP, the company has also showcased its newly launched Kia Stonic SUV at the Auto Expo. In global markets, this SUV rivals the Nissan Juke and Hyundai Kona. Internationally, the Stonic crossover is slotted between Sportage and Sorento models and both the models have also made its India debut at 14th edition of Auto Show. Inspired model is by far the most customisable vehicle from the company. To make visually appealing, Kia has added new elements including the dual tone exterior colour scheme which will be offered with as many as 20 different dual-tone colour schemes with five unique shades for the roof.

Talking about Stonic, this 5-seater premium crossover features tiger nose grille up front and sweptback headlamps. Based on the Rio hatchback, the crossover receives new bits that give it a separate identity. That said, the side profile sports sharp creases and kinks near the door sill. The upward window line is another highlight on the crossover, whereas the body cladding further accentuates the rugged look. In addition, the metal skid plates are present in front as well as rear. Some bits, like the ‘targa’ style roof loop is reminiscent of the Provo coupe concept that was revealed in 2013. Also Read – Kia Sorento | Kia Sportage 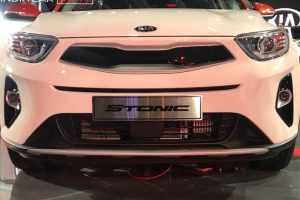 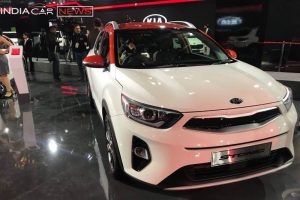 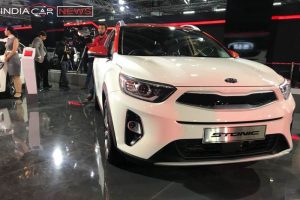 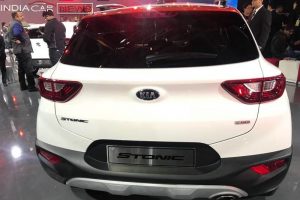 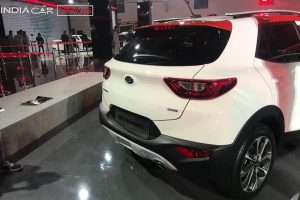 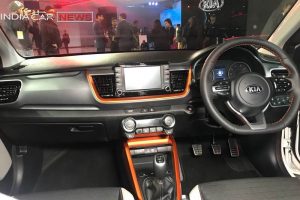 The cabin of the car is heavily inspired by Rio with similar looking dashboard and switchgear. It is equipped with a 7.0-inch touchscreen infotainment system with Apple CarPlay and Android Auto. The SUV has a two-step floor that will enable expanding the luggage compartment further or shrik it if required. Engine options for the new Stonic SUV includes a new 1.0-litre turbocharged 3-pot petrol, a 1.25-litre and 1.4-litre four-cylinder naturally aspirated units. Besides, there is a 1.6-litre oil burner as well. It is to be noted that the carline will miss out on the AWD drivetrain. In terms of rfeatures, the SUV gets heated front seats, keyless entry, automatic cruise control, etc.

First unveiled at the 2017 Frankfurt Motor Show, the SUV is currently on sale in select international market. The SUV has made its India debut at the 2018 Delhi Auto Expo. This model could go on sale in the Indian market; however, Kia is yet to make an official announcement on the same. We will update our readers as soon as Kia announces anything on the same. Read More – Kia Rio Sedan India Launch, Price, Specs

Based on the i20 platform, the Stonic is the company’s premium compact SUV that rivals the Nissan Juke and Hyundai Kona in global markets. This model will be positioned above the SP based compact SUV and is expected to be priced around Rs 13 lakh and 16 lakh. Read More – Kia Picanto hatchback might come to India

Sharing platform with the Rio twins, the Stonic will also borrow its engine specs from the smaller sibling. The petrol range of the SUV starts with a 1.0-litre T-GDI turbocharged gasoline direct injection that produces 118bhp, while the other petrol engines include a 1.25-litre and 1.4-litre 4-cylinder naturally aspirated MPI units. The SUV could also get a new 1.6-litre diesel engine. Both manual and automatic versions of the car could make its way to Indian market. Only front wheel drive version will be on offer, and it won’t have 4-wheel-drive version.

In India, the Stonic could share its engine lineup with the Hyundai Creta. While the petrol version could get a 1.6-litre unit, the oil burner is likely to be a 1.4-litre CRDi or a 1.6-litre CRDi unit. For transmission duties, this SUV will get a six-speed manual and a six-speed automatic unit. 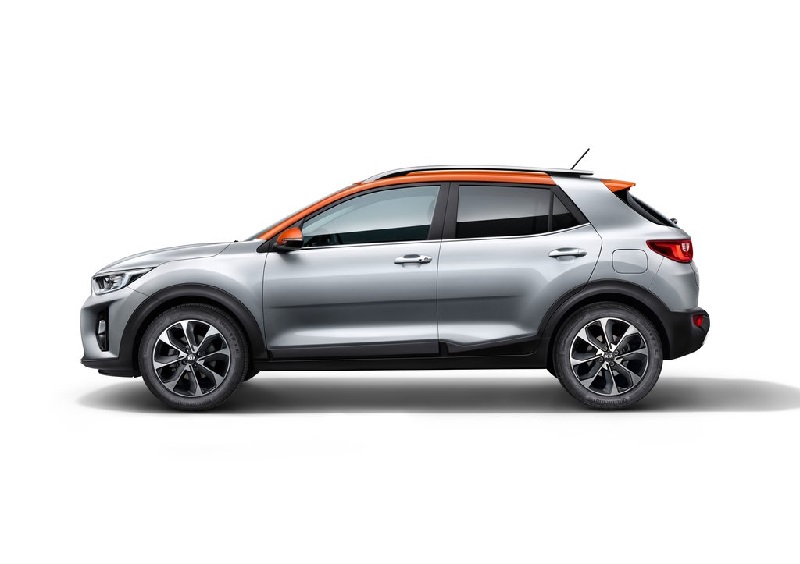 Based on the Hyundai Kona’s platform, the Kia Stonic gets a more crossover-ish design language. The front design seems sharp and sporty, equipped with Kia’s familiar grille design finished in a shade of satin grey and front lip. It gets semi clamshell-like bonnet, while the headlamp seems shared from larger Kia SUVs. The SUV has tiger nose grille and swept back headlamps similar to other Kia cars, but the company has made some changes to make it look different from the Rio hatchback. The side profile looks similar to the other SUVs in the market, featuring a smaller greenhouse area. It gets sharp creases and kinks around door sills. The flared wheel arches have been fitted to 16-inch or 17-inch alloy wheels. There is plastic cladding around pronounced wheel arches along with side skirts.

The rear looks sporty, thanks to sloping roofline with a raked rear bootlid. The slim LED tail-lamps look nice, while the bumper has satin grey skid plate. The production model will not have dual exhaust setup. 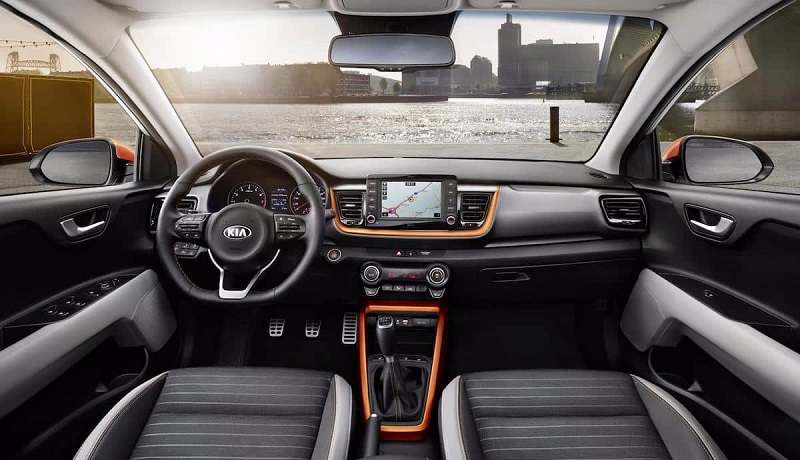 The cabin looks simple and has black theme with contrasting grey on the dashboard. The concept had orange accents on the central tunnel and central console, but these come with customisable option. It is equipped with a new touchscreen infotainment system with Apple CarPlay and Android Auto as standard. It also comes equipped with a range of technologies to enhance comfort and convenience, including heated front seats, cruise control and keyless entry. The AC is controlled by two large knobs on the bottom that also has centrally mounted screen for temperature and mode displays. Kia claims that the Stonic will be the most customisable vehicle in its line-up. The company will offer several customisation options for the buyers. 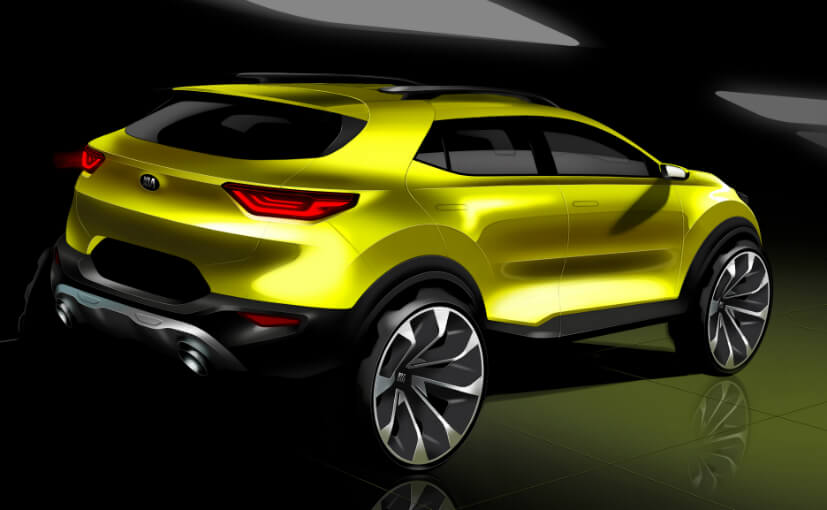 Based on Hyundai Kona's platform, the new Kia Stonic will have a crossover-ish design and conventional interiors. The company will offer several customisable options to its buyers.