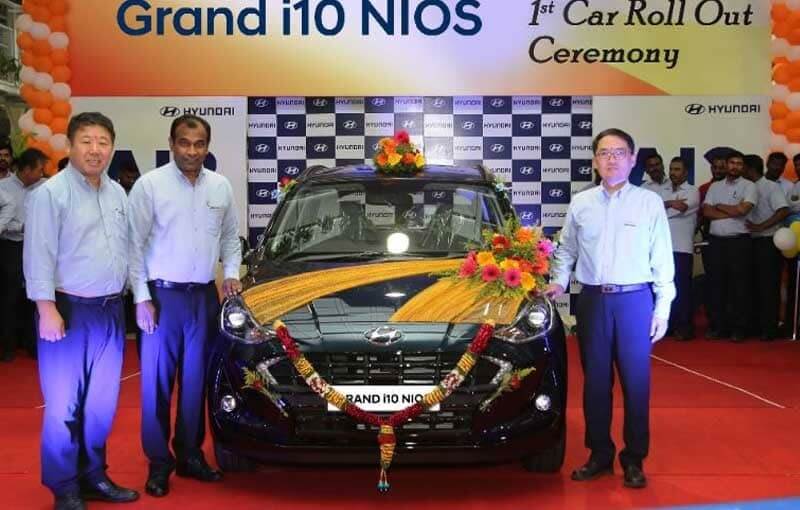 Korean automaker, Hyundai is gearing up for the launch of the new Grand i10 Nios in the Indian market, which is scheduled on August 20, 2019. Ahead of the launch, the company has announced that it has started the production of the vehicle at its Chennai based platform. Adding to it, the first car has also been rolled out from the company’s plant. Interested buyers can pre-book the new Grand i10 Nios online or at Hyundai dealership by paying an initial amount of Rs 11,000.

The new Hyundai Grand i10 Nios will co-exist with the current model. It is promised to offer more space, more features and better driving experience. The hatchback will be offered in 10 variants and 6 colour options. The hatchback will also come with diesel-AMT combination. 5-speed manual transmission driving the power to the front wheels will come as standard.

The upcoming i10 Nios will be offered with 2 engine options – a 1.2-litre Kappa and a 1.2-litre CRDi diesel. Both these engines will be compliant with the BSVI emission norms. While the former is good for 81bhp of power and 114Nm of torque, the oil burner produces 74bhp and 190Nm of torque. The petrol manual and AMT variants are claimed to deliver 20.7kmpl and 20.5kmpl respectively. The diesel manual and diesel AMT returns mileage of 26.2kmpl and 28.4kmpl respectively. Also See – 2020 Hyundai i10 Nios will co-exist with current Grand i10

The hatchback will be offered in 6 exterior paint schemes – Fiery Red, Polar White, Titan Grey, Alpha Blue, Aqua Teal and Typhoon Silver. The upcoming Hyundai Grand i10 Nios is based on the new Santro’s platform, which will be compliant with new safety and crash test norms. In terms of styling, the all-new i10 Nios gets prominent cascading grille, new headlamps with daytime running lights, floating roof, small wraparound tail-lamps with LED effects, ORVMs with integrated blinkers, and newly styled alloys.

Inside the cabin, the new Hyundai i10 Nios gets larger touchscreen infotainment system with Android Auto and Apple CarPlay, automatic AC with rear AC vents, wireless charging and many more. It misses out on the Hyundai Bluelink connectivity, which was recently introduced in the new Venue SUV.