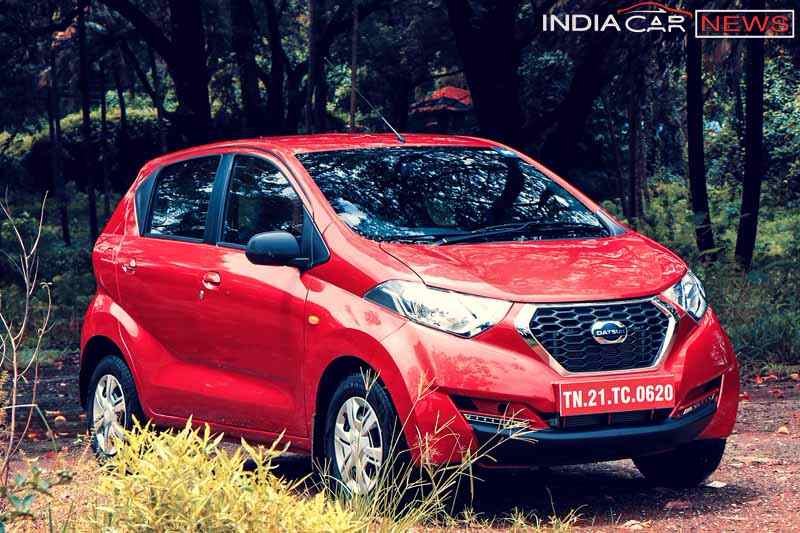 – Datsun redi-GO AMT is now available at an introductory price of Rs 3.80 lakh.

– The redi GO automatic comes in a choice of five exterior colour options.

– The hatchback uses a 1.0-litre SCe petrol engine paired to an AMT gearbox.

Datsun redi GO AMT has finally gone on sale in India at an introductory price of Rs 3.80 lakh (ex-showroom, Delhi). At this price point, the hatchback’s AMT version locks horns against the Renault Kwid AMT and Maruti Suzuki Alto K10 AGS. The redi GO AMT version comes as an option for people looking for a compact, easy-to-drive and affordable city car. Save for the AMT gearbox and few feature updates, the hatchback remains unchanged.

First launched in June 2016, the Datsun redi GO is the most affordable offering from the Japanese carmaker in India. Touted as India’s first ‘Urban Cross’, the redi GO sports a tall boy design with lots of sporty elements and a liberate cabin space. Aiming to boost its sales, the company added a more powerful iteration – Datsun redi GO 1000cc (1.0L) – to the carline. Priced at Rs 3.57 lakh (ex-showroom, Pan India), the redi GO 1000cc (1.0L) takes on the Maruti Suzuki Alto K10 and Renault Kwid 1.0L. 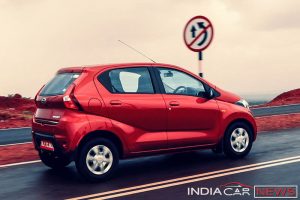 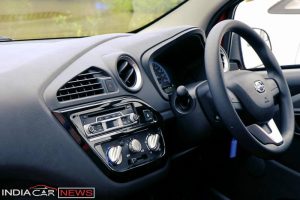 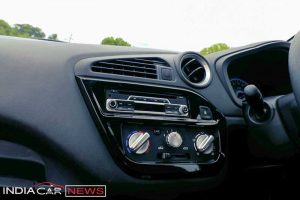 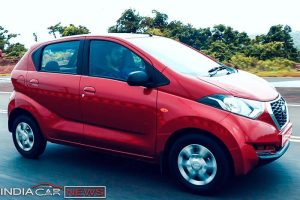 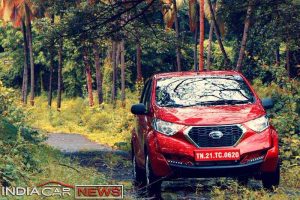 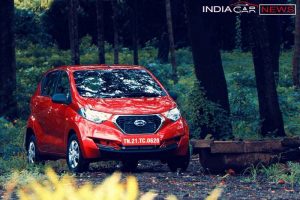 Besides featuring a powerful engine, the redi GO 1.0L receives minor cosmetic updates. These subtle changes have made it slightly more expensive than the standard model. Available in top-spec T (O) and S variants, the new redi GO 1.0L has been priced at Rs 3.57 lakh and Rs 3.72 lakh respectively (ex-showroom, Pan India). This makes it a direct rival of the Maruti Alto K10 and Hyundai Eon.

Just like the 1000cc version, the Datsun redi GO AMT has been introduced on the fully-loaded S and T (O) trims. While the Datsun redi GO 1.0L version is priced at Rs 3.57 lakh, the AMT model is made available at an introductory price of Rs 3.80 lakh (ex-showroom, Delhi). Deliveries of the car have been commenced across the nation. Interested buyers can book the car with an initial payment of Rs 10,000 at any Nissan and Datsun dealership. Read: Datsun redi-GO 1.0 Review – First Drive Report

In terms of design and styling, the Datsun redi-GO 1.0 litre and AMT look exactly similar to the standard 800cc model. Though, there are subtle cosmetic updates including additional badging and body decal. The hatchback uses the CMF-A platform, which is carried over the Kwid hatchback. There has been a conscious effort from carmakers to improve the visual appearance of the hatchback in the budget segment. Eon was the first car to ditch the mundane design and Kwid revolutionized it further. Pictures & Details – Datsun Go Live Concept

Datsun’s small car has a sporty appearance and use of quirky elements personifies it. Given that both Kwid and redi-GO are built on the same platform, this also testifies the versatility of the platform that can be used to build different models in future. At the front fascia, the hatchback features a hexagonal grille with honeycomb pattern and chrome embellishment and pulled back headlamps that get narrow towards the end.

The LED daytime running lights (DRLs) are yet another first in segment feature that put it apart from other models. The chromed bumper with integrated LED fog lights and the twin character lines run across the front and rear. Flanks sport pronounced wheel arches, rising beltline and skinnier tyres. Moving towards the rear, the car gets contoured tailgate, vertically stacked tail lamps and reflectors on lower bumper. Photo Gallery: Datsun redi GO – 10 Interesting Things 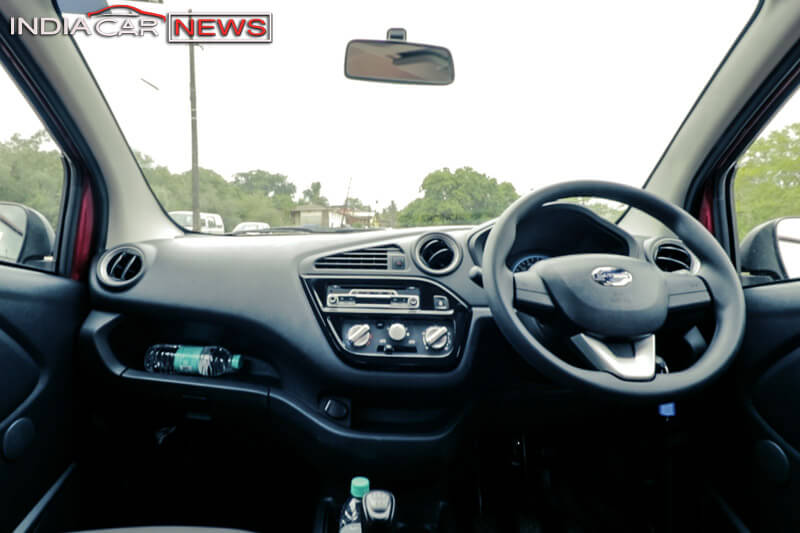 Similar to the exterior, the cabin receives minimal changes and a few additional features. Though, it retains the same layout and styling as on the 800cc model. In terms of cabin space, the redi-GO is more comfortable compared to rivals, offering decent room to passengers seated in front and rear. As far as features are concerned, the small car comes equipped with a 3-spoke steering wheel, Bluetooth audio streaming with hands-free calling, central locking system with remote key, front power widow with controls placed on the floor console, tall gear level and HVAC vents. The Datsun redi GO AMT comes in a choice of five colour schemes – Lime Green, Ruby Red, Silver and White Grey. Read – Datsun Go Cross Might Debut at 2018 Auto Expo

Sitting on the Renault-Nissan’s CMF- modular platform, the new 1000cc redi GO derives its power from a 1.0-litre SCe petrol engine that also does duty in the Kwid 1.0-litre. This motor churns out a maximum power output of 67bhp against 91Nm of peak torque. The standard model of the hatchback is propelled by a 799cc, 3-cylinder, DOHC petrol engine making a top power 53.2bhp and 72Nm of torque. Transmission on offer is a 5-speed manual gearbox.

On the other hand, the Datsun redi GO AMT comes equipped with the same 1.0L powertrain that does duty on the 1000cc version. This gasoline unit develops a peak power of 67bhp and 91Nm of torque. Instead of the regular 5-speed manual gearbox, this motor is paired to an AMT (Automated Manual Transmission) unit. The hatchback offers two driving models – Dual and Rush Hour. While the former enables to switch between automated and manual mode in city traffic/up-hill/down-hill, the latter one with the crawling function offers a cruising speed of 5-6kmph. Read: Datsun  redi GO Gold 1.0 Limited Edtion – Price & Details 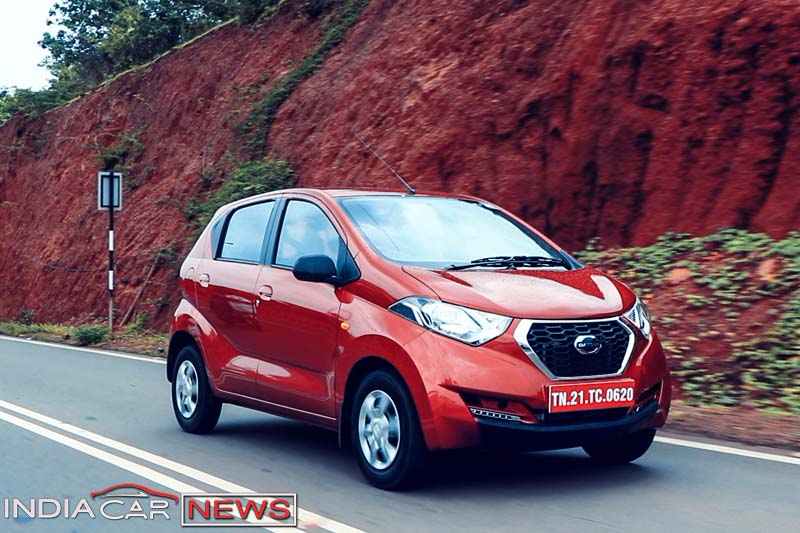 Packed with the 799cc petrol engine, the standard redi GO returns a claimed fuel economy of 25.17kmpl (ARAI certified). Mileage of the more powerful 1.0 litre model is slightly higher than the 800cc model – all thanks to Intelligent Spark Automated Technology (iSAT). On the Kwid, this 1.0L unit delivers a claimed mileage of 22.04kmpl (ARAI certified), and the redi GO 1.0L delivers 22.5kmpl of fuel efficiency. The AMT-equipped model returns a mileage around 24kmpl.

No dimensional changes have been made to the car. The Datsun redi GO 1.0L continues to measure 3,429mm in length, 1,560mm in width and 1,541mm in height. The hatchback sits on 2,348mm of wheelbase, offering decent cabin space for occupants. It offers a luggage area of 222 litres. Other details like ground clearance and turning radius stand at 185mm and 4.73m respectively.

In the budget segment, Datsun redi-GO goes up against the Maruti Suzuki Alto K10, Renault Kwid and Hyundai Eon. All the above mentioned models are also available with a 1.0 litre engine, but the AMT unit is offered only on the Alto K10 and Kwid.