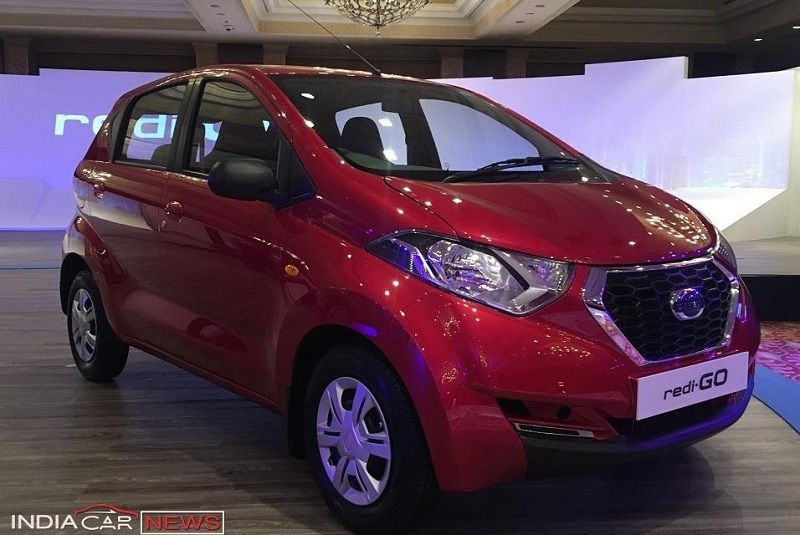 Launched in the month of June 2016, the Datsun redi GO has been receiving phenomenal response from buyers across the country. The company claims to have sold 3000 units of the vehicle within just 23 days of its launch. Total bookings for the vehicle have now crossed 10,000 units. Available in a total of five variants, Datsun’s small car was rolled out at a jaw-dropping price of Rs 2.38 lakh (ex-showroom, Delhi).

Referred as the country’s first ‘Urban Cross’, the Datsun redi-GO is based on the CMF-A platform which is the same that underpins the Renault Kwid. Despite sharing the platform with the Kwid, the rediGO is 25kg lighter than the former which also help in improving its performance.

Power for both the Datsun redi GO and Renault Kwid comes from the same 0.8-litre petrol mill that has been developed by Renault-Nissan Alliance. The alliance is also working on a new 1000cc petrol engine that might debut with the Kwid AMT later this year.

Everything about the car in 10 quick points –

Thanks to its aggressive pricing, the redi GO has undercut all of its competitors including Maruti Alto 800, Renault Kwid and Hyundai Eon. As a matter of fact, Datsun’s new small car is just 10,000 pricier than the Tata Nano, which is India’s most affordable car.

The redi-GO’s 799cc, 3-cylinder petrol engine develops power worth 53.2bhp at 5,678rpm against a peak torque of 72Nm at 4,386rpm. Transmitting power to the front wheels of the car is a 5-speed manual gearbox.

At a later stage, Datsun might also introduce an AMT (automated manual transmission) gearbox-equipped version of the redi-GO. If reports are to be trusted, the Datsun rediGO might also get the same 1000cc engine which will be introduced on the Kwid later this year. This engine will be good enough for 65bhp.

Thanks to its light weight and smaller engine, the Datsun redi GO returns an impressive mileage of 25.17kmpl (ARAI-certified). With this, Datsun’s new small car matches the fuel efficiency figures of the Renault Kwid. In other words, Renault Kwid will now have to share the title of being the ‘most fuel-efficient car in the category’ with its cousin redi-GO.

The rediGo is available in a total of five exciting shades –  White, Ruby Red, Silver, Lime and Bronze Grey.

Datsun’s new entry-level hatchback offers the best-in-class ground clearance of 185mm and a high seating position. With a length of 3,430mm, the new Datsun hatchback measures 249mm shorter than the Kwid. Despite that, this will be slightly taller and more spacious. The height and wheelbase of the hatchback stand at 1,540mm and 2,430mm respectively.

Though the Renault Kwid and Datsun rediGO share their underpinnings, they look completely different from each other. The redi-GO, in fact, looks largely identical to its concept that had made its debut at the 2014 Delhi Auto Expo.

The front fascia of the car has a sporty appeal, thanks to its hexagonal honeycomb pattern grille with chrome slat, stylish sweptback headlamps with LED daytime running lights (first-in-class), chromed bumper with integrated LED fog lights and twin character lines running across the front to the rear. 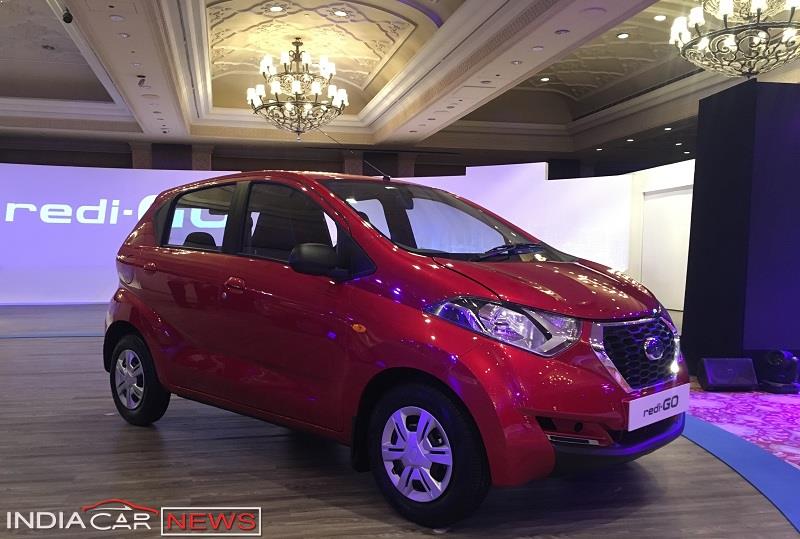 Other elements that the Datsun redi-GO borrow from the concept are sculpted bonnet, steel wheels with skinnier tyres and sporty rear design. At the rear, there is a contoured tailgate, vertical tail lamps and separate reflectors on the lower bumper.

The interior design of the redi-GO is quite different from any of its siblings. The car gets a 3-spoke steering wheel, front power window controls on the floor console, round HVAC vents and tall gear lever. 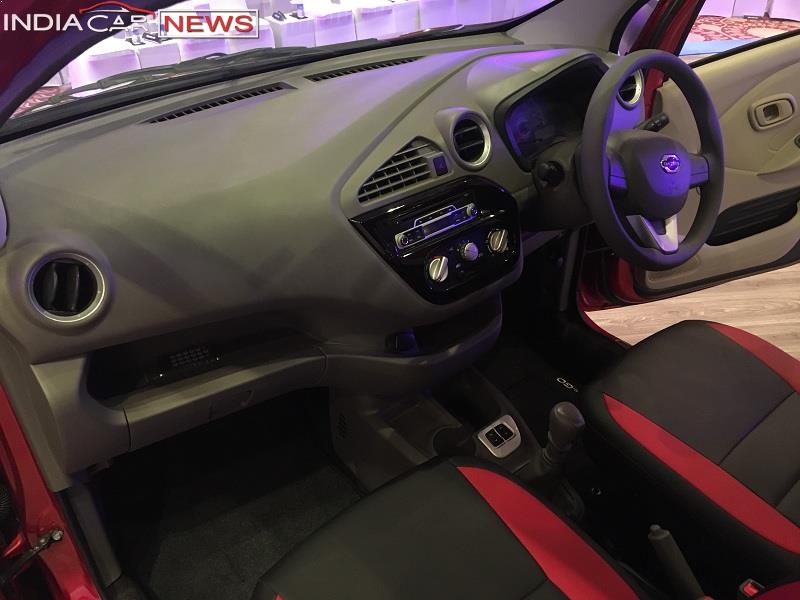 Datsun claims that the redi-Go offers best-in-class space and kneeroom for front and rear seats occupants. Similar to the Kwid, Datsun’s new small car gets a beige dashboard with black plastic centre console and fabric seats with dual-tone brown and beige finish.

Positioned below the GO and GO+, the Datsun redi-GO hatchback takes on the likes of Renault Kwid, Maruti Suzuki Alto 800, Hyundai Eon, Tata Nano and others in the segment