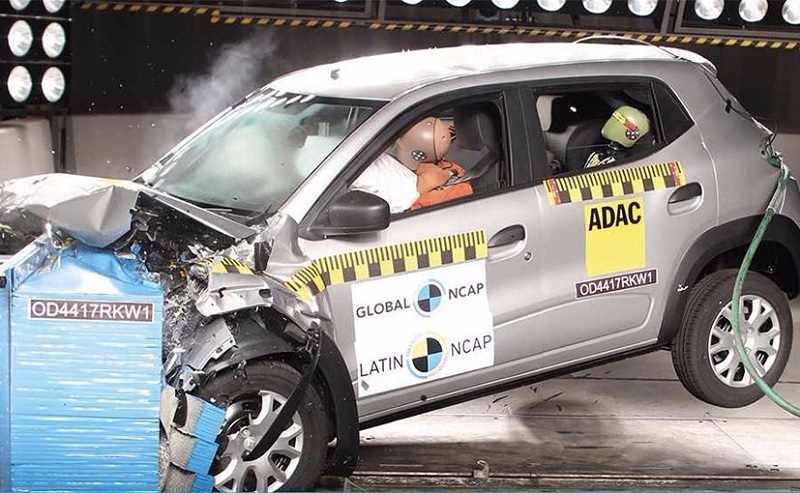 The Brazil-spec Renault Kwid not only gets improved body shell, but it’s heavier and safer than the Indian model.

Renault Kwid hatchback has scored a 3-star rating in the seventh round of Latin NCAP (New Car Assessment Programme) crash test. One must note that the tested model was produced in Brazil. In the adult occupant protection, the hatchback managed to score three stars that makes it safer than the India-spec model. The latter one achieved a zero rating in the crash test.

While the frontal protection and marginal side impact protection of the Kwid was satisfactory, the chest area protection was weak. In the side impact barrier test, the hatchback performed pretty well. Its side impact structure put off substantial intrusion. In fact, the side thorax airbag can avoid life threatening injuries. The crash test result also shows that the hatchback provides adequate protection for child occupants. In the front and side crash tests, the Kwid offered good protection to both the driver and passenger. Pictures – Renault Kwid Extreme Edition

In terms of safety features, the made-in India Renault Kwid is different from the Brazilian version. The Brazil-spec hatchback comes equipped with four airbags as compared to the Indian model that gets optional driver airbag on the top-end variant. Other safety features offered on the tested model include ABS (anti-lock braking system), SBR (seat belt reminder), passenger front seatbelt pretensioners and ISOFIX anchorages. Read – Renault Kwid Family To Get Three New Models

Compared to the India-spec Kwid, the Brazil-made model has better structural reinforcements and safety performance. In fact, the latter one weighs 140kg (approx.) extra than the former one.  Just so you know, the Made-in-India Kwid scored zero star rating in Global NCAP crash test.

Alejandro Furas, Secretary General of Latin NCAP said, “It is good to see how fast manufacturers can react from the first ever tested Kwid (Indian version tested by Global NCAP) to this three star Brazilian-made Kwid. It is encouraging to see car makers reacting to Latin NCAP’s, Global NCAP’s and consumers’ preferences for better safety performance, even in entry level cars.”

David Ward, Secretary General, Global NCAP said, “”Remarkably rapid safety progress from the original Renault Kwid made in India, to the latest Brazilian version. But why didn’t Renault build in better than zero star performance for the Kwid from the outset?”