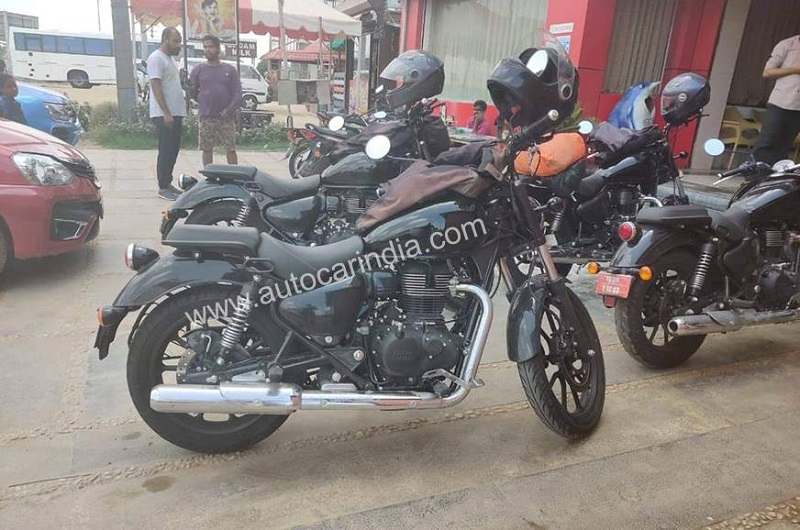 The spotted model misses out on the kick-starter, and has more compact gearbox casing compared to the current model. The throttle body is covered, which looks very similar to that of the company’s 650. The motorcycle is also expected to receive comprehensive electronic package to meet the BS6 regulations. It also features a more compact exhaust pipe, which ends well before the rear tyre.  Also See – Royal Enfield Classic 350 S Launched

The new RE Thunderbird will come with cruiser-style riding position. The footpegs are positioned slightly forward to offer a better riding position. It is based on the new double-cradle chassis. All the cycle parts including discs and calipers are now located on the right side instead on the left.

The new motorcycle features a single-pod instrument console instead of the twin-pod gauges in the current model. It is likely to be a digi-analogue unit that will have more functions than the outgoing model. It is also expected to feature all-LED lighting, a large windscreen and mounts for panniers, saddlebags. Also See – Royal Enfield Bullet 350 X Launched

In terms of styling changes, the new Thunderbird gets new rear-end design, restyled fuel tank and side panels. The fuel tank design seems identical to the existing model, while the rear fender and indicator design is different. It also gets new alloy wheels with U-shaped spokes. The 2020 Royal Enfield Thunderbird will be equipped with BS6 compliant engine, which is expected to increase the production cost. The new bike is likely to be around Rs 10,000 expensive over the standard variant.