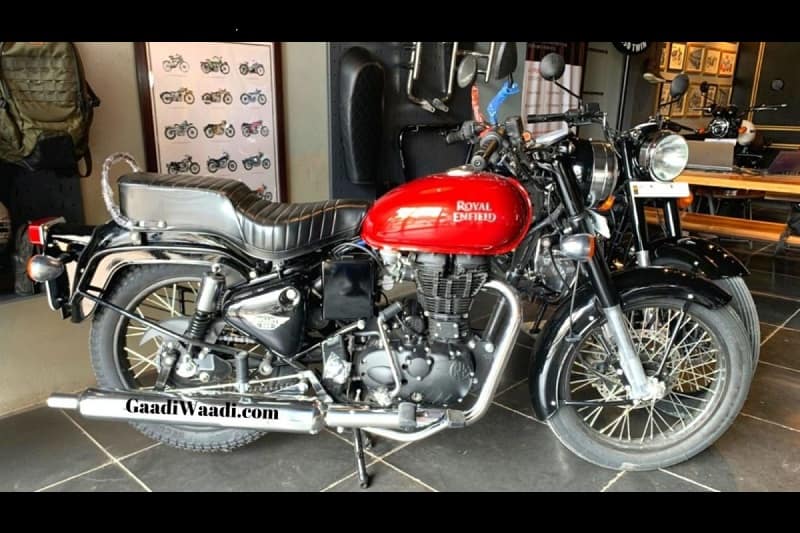 Royal Enfield today rolled out the RE Bullet 350X motorcycle in the country. Based on the Bullet 350 platform, the new Bullet 350X comes in two variants – base 350X and 350 ES X (Electric Start) – priced at Rs 1.21 lakh and Rs 1.26 lakh (ex-showroom, Delhi) respectively. At this price, the new Royal Enfield Bullet 350X becomes the most offering from the Chennai based bikemaker in India.

Featuring blacked –out theme and vibrant colour schemes,  the new Royal Enfield 350X looks sportier than the RE Bullet 350. Unlike its donor sibling that has lots of chrome treatment, the new variant features black crank cases and engine block along with silver finish. Read – Top 5 Upcoming Royal Enfield Bikes

The Royal Enfield 350 ES X is exclusively offered in Jet Black colour scheme along with Royal Blue and Regal Red shades. The RE 350X, in the other hand, comes in Bullet Silver, Magin Black and Sapphire Blue paint schemes.

The Chennai based bikemaker is working on BS6-ready engine that will debut on the new-generation of Bullet, Classic and Thunderbird. The new RE motorcycle range will be launched before 1st April, 2020. For braking duties, the Royal Enfield Bullet 350X gets a disc rotor up front and a rear drum unit along with single-channel ABS. It also gets Rear Wheel Lift-off Protection (RPL).