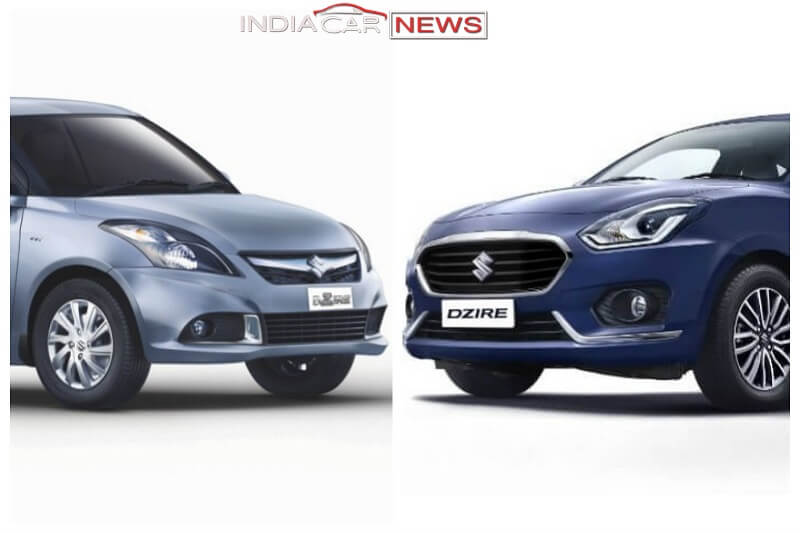 Here is a specs, features & design based comparison between the new Maruti Dzire and the old Swift Dzire.

The new Maruti Dzire 2017 is finally available for sale in India priced between Rs 5.45 lakh to Rs 9.41 lakh. Tapping into the third generation, the new Dzire (with the Swift badge dropped) is a far cry from the predecessor, which will be sold simultaneously under the Dzire Tour nameplate. The new Dzire witnesses see change over the previous model, albeit the price difference between them is insignificant.

As Dzire readies for a new innings in the segment, we pit both the models to find out how ‘Dzire-able’ is the new-gen model. While we bring you a spec-based comparison between the new and old gen model, stay tuned for our video review.

Based on Suzuki’s Heartect platform, the third-generation Dzire receives comprehensive design and styling changes. The front is all-new, key elements such as the new hexagonal grille, new bumper with redesigned fog lamps, slightly reshaped projector headlamps with LED units infuse aggression. While it remains unchanged from side save for the new 15-inch and precision cut dual-tone alloys on the top-spec variant.

Rear also gets new updates including the new LED tail-lamps, a chrome strip etc. Aside from cosmetic changes, the sedan also witnesses change in dimensions. That said, the new Dzire measures 40mm wider and the wheelbase has also increased by 20mm. On the other hand, the ground clearance has been dropped by 7mm and the height has also been trimmed. Read – New Maruti Dzire Vs 2017 Hyundai Xcent

Interior is refreshing, draped in beige and black theme from the previous model. Maruti claims to have improved the plastic quality, fit and finish. Other bits that add to its premium feel are flat-bottomed steering wheel with high quality buttons, new instrument cluster and new comfortable front seats to name a few. To offer more space on the inside, Maruti has increased the wheelbase by 20mm and width by 40mm. In addition, Maruti has packed new in-cabin tech that make it more desirable. One of the other changes on the new Dzire is the larger luggage compartment which now offer 376-litres of space, up by 60-litres. Read – New Maruti Swift Coming At Auto Expo 2018

Engine options on the new Dzire are carried over from the previous model. The 1.2-litre, K-Series engine with 83.1bhp and 115Nm of torque powers the petrol variants. Diesel Dzire gets the same 74bhp, 1.3-litre unit with 190Nm of torque. Transmission choices on both the engines include a standard 5-speed manual unit and a 5-speed AGS. Please note the AGS is bereft in entry level LXi and LDi trims in the carline. Check Out – New Maruti Swift Dzire 2017 – Picture Gallery

Courtesy the new platform, the new Dzire is notably lighter than the previous model. The petrol variant weighs 85kgs less and the diesel version is lighter by 95kg. This in turn makes it more frugal with the fuel economy for the diesel Dzire rated at 28.40kmpl and petrol at 22kmpl. Just so you know, the new Dzire diesel model with 28.40kmpl of mileage is not only the most fuel-efficient sub-compact sedan but also the most frugal diesel cars in India, slightly ahead of larger sibling Ciaz.