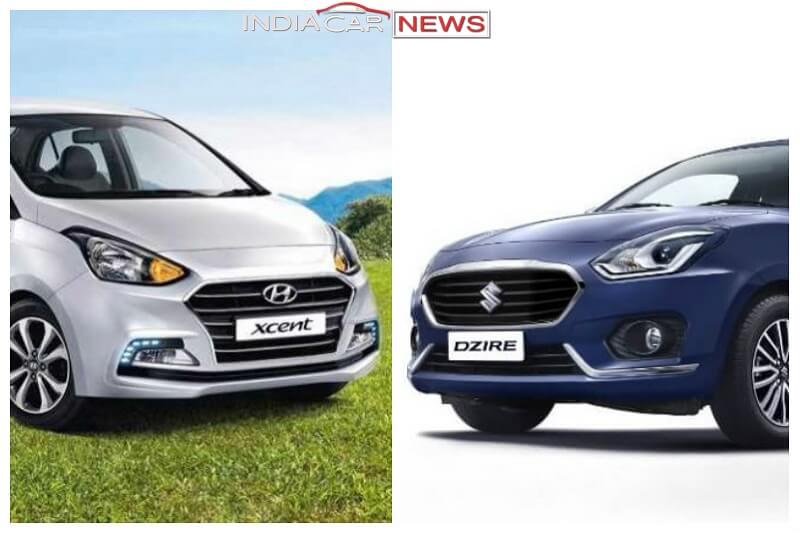 We bring a spec-based comparison to give an insight on what’s new on Xcent facelift and 3rd gen Maruti Dzire.

As the competition intensifies in the subcompact segment, the segment leader, Maruti Dzire has entered the third generation to shun rivals. Besides the shorter name ‘Dzire’, the compact sedan received a completely new look and a host of new comfort and safety features. Now the all-new Dzire is on sale, its close competitor Hyundai Xcent recently received a mid-life facelift with significant cosmetic and feature updates.

A better looking Xcent, aimed squarely at individual buyers also witnesses slight price cut compared to the Xcent-Prime version for fleet operators. With the two models, up for a fight, we bring a spec-based comparison to give an insight on what’s new on Xcent facelift and 3rd gen Maruti Dzire.

With a completely transformed exterior profile, more upmarket cabin and better features, the new Dzire is around 5% more expensive than the old one. The petrol models of the compact are made available within the range of Rs 5.45 lakh – Rs 8.41 lakh, and the diesel variants fall in a vanity of Rs 6.45 lakh – Rs 9.41 lakh (all, ex-showroom, Delhi). At this pricing, the sedan is relatively pricier than its new rivals such as Tata Tigor and Hyundai Xcent.

Under the hood, things for the new Dzire remain unchanged. The compact sedan continues to come with the 1.2-litre K-Series petrol and 1.3-litre DDiS diesel engines making 83.1bhp at 6000rpm with 115Nm at 4000rpm and 74bhp with 190Nm of torque at 2000rpm. While the sedan retains the conventional 5-speed manual transmission, there is a new optional AMT auto box.

On the other hand, the 2017 Xcent comes with 1.2-litre, Kappa VTVT petrol engine that is good for 82bhp at 6000rpm and 114Nm of torque at 4000rpm. Ditching the previous 1.1-litre U2 diesel, the compact sedan gets a new 1.2-litre unit borrowed from the Grand i10 facelift. This oil burner churns out a top power of 71bhp at 4000rpm and 180.4Nm torque between 1750rpm and 2500rpm. Transmission options include the standard 5-speed manual and an optional four-speed automatic unit. Check Out – New Maruti Swift Dzire 2017 – Picture Gallery

On the fuel efficiency front, the Maruti Dzire takes a lead over its arch rival. The compact sedan’s petrol version returns an ARAI-certified mileage of 22kmpl, while the Xcent delivers 20.14kmpl (MT) and 17.36kmpl (AT). With a claimed fuel economy of 28.09kmpl, the Dzire diesel becomes the most frugal car in the country. On the other hand, the Xcent diesel gives 25.4kmpl.

Compared to its predecessor, the new Maruti Dzire sits on a longer wheelbase (2,425mm) offering more space for front and rear passengers. While the height and ground clearance of the sedan have been trimmed by 21mm and 7mm respectively, the width has been increased by 40mm. Now, the Dzire measures 3995mm in length, 1,735mm in width and 1,515mm in height.

Proportionally, the Hyundai Xcent facelift remains unchanged. It continues measuring 3,995mm long, 1,660mm wide and 1,520mm high. The wheelbase of the Xcent is same as the Dzire. The sedan offers a luggage compartment of 407-litres, which is 31-litres more than the Dzire.

Designed on Baleno’s ‘Heartect’ platform, the new Dzire comes loaded with several advanced comfort and safety features. Maruti has also classed up the connectivity level of the car. Features such as auto headlamp with lead me to vehicle, follow me home functions and reverse parking camera and sensors, automatic climate control and engine push start-stop button with smart key are restricted to the top-spec model. The standard list of features include tilt steering, manual air conditioner with heater, front socket accessory, pollen filter, dual airbags, ABS with EBD and brake assist and ISOFIX.