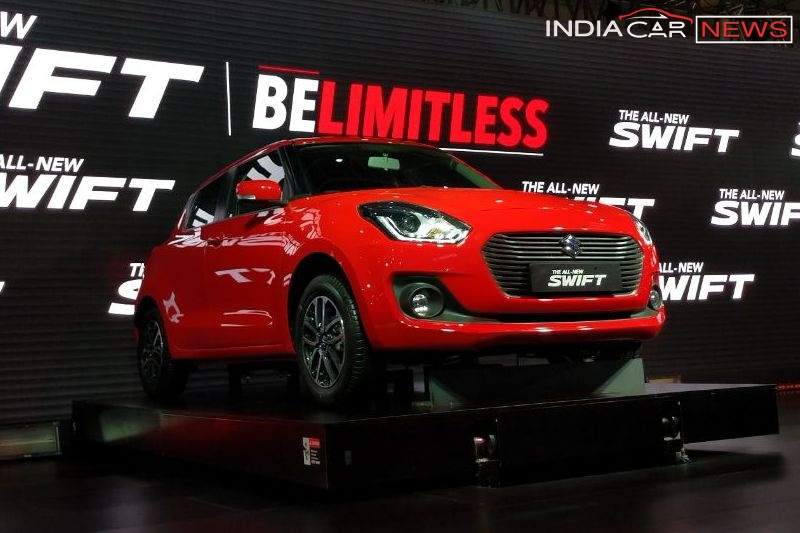 – The third-generation Swift is claimed to have more aerodynamic design.

Launched at the Auto Expo in February, the new Maruti Swift 2018 has been making waves in the automobile industry. In fact, the hatchback clocked over 40,000 bookings even before its price announcement and by the end of February 2018 the figure crossed over 60,000 orders. Filling the big shoes of its predecessor that dominated the segment for decades, the new Swift has achieved a booking milestone of one lakh in just 10 weeks. It’s the highest and fastest ever figure achieved by a car in the passenger vehicle segment.

Interestingly, about 31% of bookings are for the top-end variant and 15% for the AMT (auto gear shift) variants. The data reveals that 26% of customers are opting Swift for its style, followed by its features and the brand name. With a total sales of 22,776 units, the Maruti Suzuki Swift was the top-selling car of the month April, 2018. The hatchback outsold its four siblings including Dzire (21,401 units), Alto (21,233 units), Baleno (20,412 units) and WagonR (16,561 units).

Priced at Rs 4.99 lakh (ex-showroom, Delhi), the third-generation Swift witnessed comprehensive aesthetic upgrades making it a lot better-looking than the previous model. Interior has also been classed up in terms of quality and feature packaging. The Indo-Japanese carmaker claims that “the all-new Swift is more aerodynamic and poised to offer superior ride, handling and drivability”. Underpinning the hatchback’s new model is the 5th generation HEARTECT platform, which is composed of lots of aluminum and high-tensile strength steel. Under the hood, the new Maruti Swift 2018 retains the K12 VVT petrol and DDiS 190 diesel engine from the predecessor. Though, these units have been further tuned for achieving better performance and driving dynamics. Features such as Suzuki’s lightweight HEARTECT platform, more aerodynamic design and balanced suspension enhance the fuel efficiency and ride quality of the car. Read: New Maruti Swift Vs Old – What’s The Difference?

In terms of design, features and performance, the new Swift is a lot better product than the old model. Additionally, the car comes loaded with several comfort, safety and connectivity goodies that are bereft in the previous version. While the engine setup remains unchanged, the hatchback uses Suzuki’s all-new HEARTECT platform which also underpins the new models like Baleno and Dzire. The car also receives Auto Gear Shift (AGS) gearbox that brings it abreast with rivals.

The 2018 Maruti Swift carline is spread across 12 variants with both petrol and diesel engine options. Point that needs to be noted here is the AGS gearbox is available only on the mid-level VXi and ZXi petrol and VDi and ZDi diesel variants. While the petrol variants have been priced from Rs 4.99 lakh to Rs 7.29 lakh, the diesel trims range from Rs 5.99 lakh to Rs 8.29 lakh (all, ex-showroom Delhi). The 2018 Maruti Swift is exclusively produced at Maruti Suzuki’s Gujarat based facility instead of the carmaker’s Manesar plant. Read – 2017 Maruti Ciaz Facelift – All You Need To Know 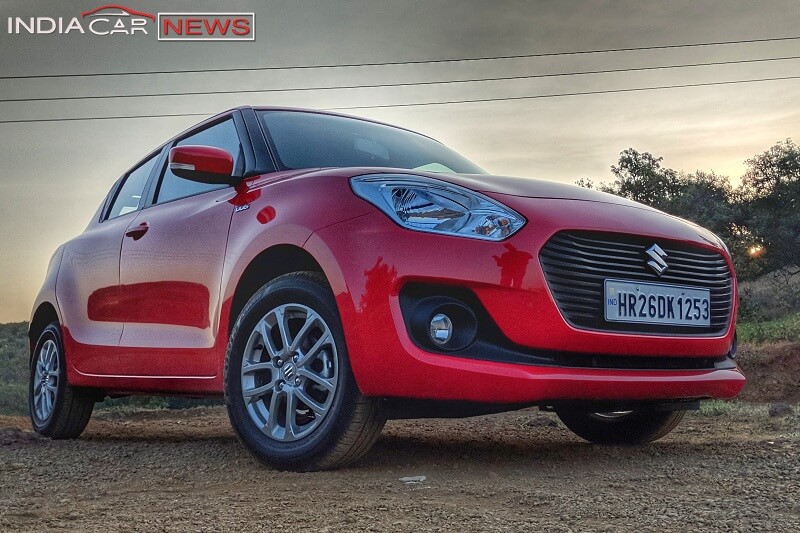 Official bookings for the new Maruti Swift 2018 were commenced from 18th January, 2018 for Rs 11,000. Even before its launch at the Auto Expo (on February 8, 2018), Maruti Suzuki had confirmed that the hatchback recorded over 40,000 bookings. And in less than 15 days of its launch, the booking figures crossed 60,000 mark in India. Now, the hatchback has garnered over one lakh bookings in 10 weeks of duration. With this achievement, the 2018 Swift becomes the fastest passenger vehicle to mark this figure. In April 2018, the hatchback emerged as the top-selling car of the country. Picture Gallery – Upcoming Maruti Cars in India 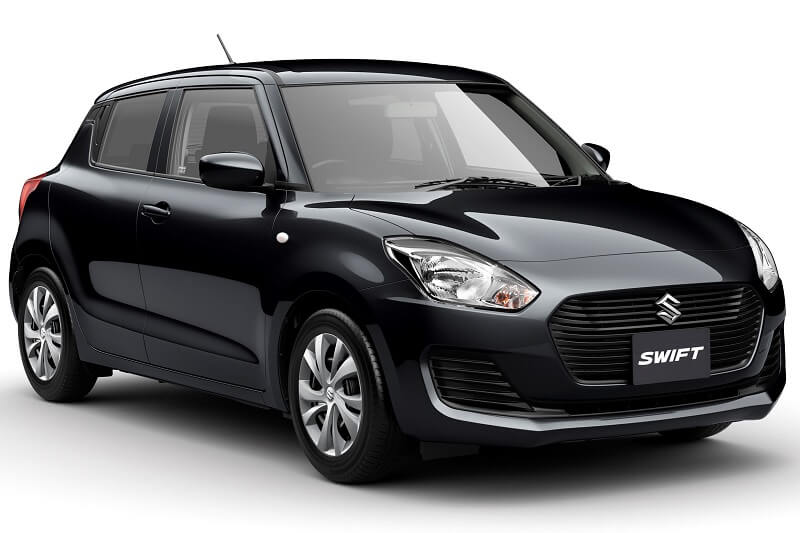 Maruti Swift 2018 is the carmaker’s fourth product in India which is based on Suzuki’s HEARTECT platform. The others are Baleno premium hatchback, Ignis mini-SUV and new Dzire compact sedan. The new architecture is composed of 41% tensile steel that makes the third-generation Swift stiffer, stronger and lighter (by 100kg) than the old model. Maruti also claims that the power to weight ratio of the car has been improved for achieving better acceleration performance and drive experience. With majority of the updates made to the fascia, the new Swift seems to be a far cry from its predecessor.

In terms of design and styling, the 2018 Maruti Swift looks more mature and curvish than the previous model. While the entry-level variant features a blackened grille, other variants get a new hexagonal grille with chrome surround. What further enhance its sporty front look are all-new bumper accommodates new fog lamps and mesh air-intakes, and the sculpted bonnet. Styling bits like LED projector headlamps with a signature LED daytime running light design, wrap around windshield with unified DLO (day light opening) graphic and vertically sweeping lamps are also on offer. Read – Maruti Swift RS Might Debut At 2018 Auto Expo

Towards the side profile, the hatchback’s new-gen model looks largely identical to the second-gen Swift. Though, it gets new dual tone diamond cut alloy wheels, new outside rear view mirrors with integrated blinkers and floating roof line. The height of the car has been trimmed down by 30mm, which should make it more proportionate. The rear door handles are now positioned on the C-pillar, similar to the Mahindra KUV100. Multiple updates have been made to the rear end of the hatchback. Round the back, it sports new wrap-around tail-lamps, new roof spoiler, larger body coloured bumper, flatter lid and shorter windscreen. 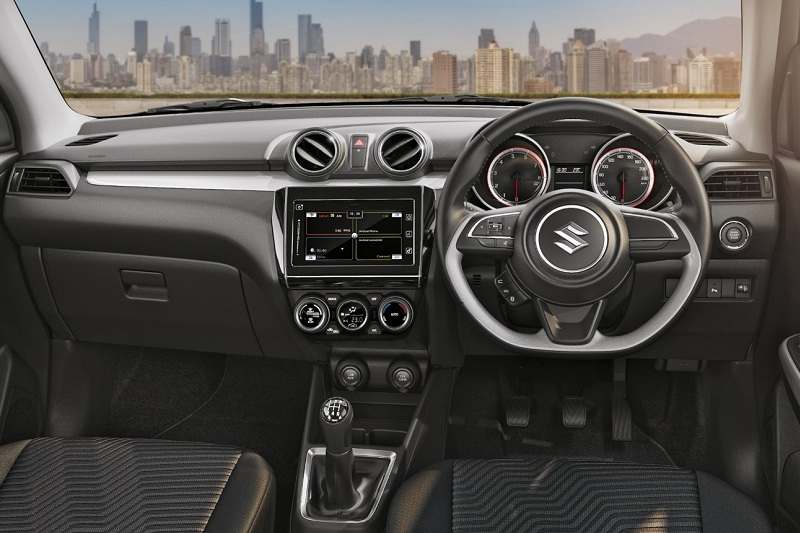 Comprehensive updates continue inside the cabin as well. With a new layout and lots of new goodies, the 2018 Maruti Swift offers a more up-market and comfortable interior than the previous generation. The hatchback also witnessed improvement in terms of material quality and fit and finish. One of the prominent changes inside the cabin is the newly designed dashboard featuring contrasting trims for a contemporary look. The door and floor panels also come with contrast trims. Similar to the new Dzire, the 2018 Swift gets a new three-spoke flat bottom steering wheel with mounted controls and urbane satin chrome finish.

In order to improve its connectivity level, Maruti equips the car with a new touchscreen SmartPlay infotainment system with smartphone connectivity options such as Apple CarPlay, Android Auto and Mirror Link. It also gets in-built voice recognition, Bluetooth audio streaming and navigation. Features such as new HVAC controls with circular vents, automatic climate control with integrated digital displays and two-pod instrument dials with a large MID are also on offer. Check Out – New Maruti Swift Explained in Pictures

Under the hood, the 2018 Suzuki Swift hatchback continues to house the same 1.2-litre K-Series petrol and the Fiat sourced 1.3-litre DDiS diesel powertrains. Though, the Indo-Japanese carmaker has tuned both motors for better fuel efficiency and performance. The gasoline motor delivers a maximum power output of 83bhp at 6,000rpm while delivering a peak torque of 115Nm at 4,000rpm. On the other hand, the diesel model is propelled by the same Fiat-sourced 1.3-litre, DDiS 190 engine. This oil burner can make a top power of 74bhp at 4,000rpm against 190Nm of peak torque at 2,000rpm. While the hatchback gets the conventional 5-speed manual transmission as standard, the AGS (Auto Gear Shift) is optional. The latter one is available on the VXi/ZXi petrol and VDi/ZDi diesel variants only. Read – Maruti Swift Hybrid Might Come To India

Minor dimensional changes have been made to the new Maruti Swift 2018. While the overall width, height and wheelbase of the car have been increased, the length has been trimmed down. The hatchback’s new-gen model measures 3,840mm in length and 1,495mm in height, thus making it 10mm shorter and 30mm taller respectively. Its width stands at 1,735mm and the wheelbase has been extended by 20mm to 2,450mm. The longer wheelbase ensures more cabin space for the front and rear occupants. The hatch stands high on a ground clearance of 163mm, which is more than sufficient to tackle Indian road conditions. While the petrol model of the car carries a kerb weight of 860kg, the diesel variant weighs 970kg. The new Maruti Swift 2018 comes with a fuel tank capacity of 37-litres.

The new Maruti Swift has shredded off substantial weight – thanks to its lightweight HEARTECT platform. The new architecture not only makes the car lighter and safer than before, but helped it achieve better fuel efficiency and performance as well. Moreover, it also aids to the overall handling and driving dynamics of the car. The new Swift’s more aerodynamic with improved wind resistance (coefficient of drag) further enhances its frugal nature. With all the extra weight gone, the new Swift petrol delivers an ARAI certified mileage of 22kmpl and the diesel model returns 28.4kmpl. Read – 2018 Maruti Swift Sport India Launch On The Cards 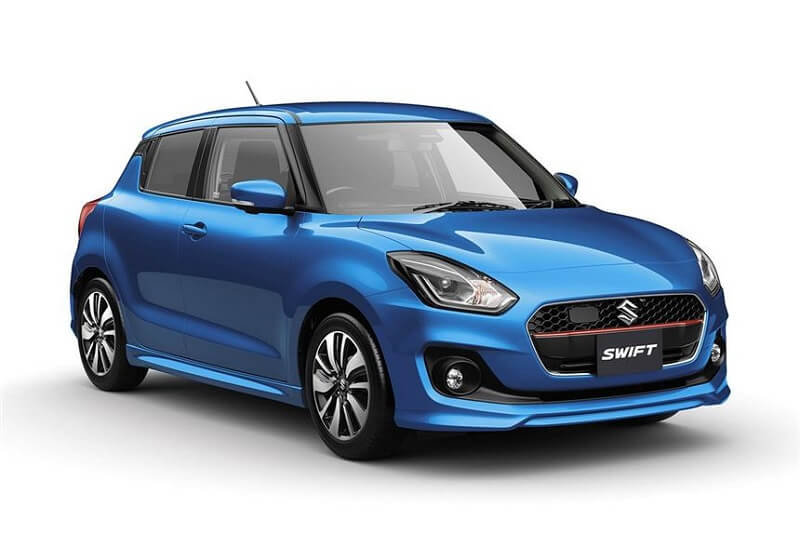 The all-new Maruti Swift has witnessed comprehensive aesthetic changes, new equipment and transmission options. With all these updates, the new model takes on the Hyundai Grand i10, new Ford Figo and Volkswagen Polo.

Maruti Suzuki claims that suspension unit of the 2018 Swift is “highly balanced for better ride and comfort”. For performing damping duties, the 2018 Maruti Swift gets the McPherson strut with coil spring and torsion beam with coil spring unit at the front and rear axles respectively. The hatchback derives its braking power from the front disc and rear brakes. This braking system is further assisted by the anti-lock-braking system (ABS) with electronic brake-force distribution (EBD). Read: Maruti Vitara SUV Launch Details Revealed

Built on the new HEARTECT underpinnings, the new Swift sits higher and has a 20mm longer wheelbase. The increase in wheelbase creates more space for the occupants seated inside, offering better legroom, headroom and shoulder space to the rear occupants. The bolstered seats offer better seating comfort. The 2018 Maruti Swift, however, is devoid of rear air-conditioning vents. The new touchscreen SmartPlay infotainment system with Android Auto, Apple CarPlay and Mirrorlink connectivity is also on offer. Though, it is restricted to the range-topping variant. What add more to its comfort quotient are seats with better cushioning and improved thigh and back support.

Practicality has always been one of the strong attributes of the Maruti Suzuki cars, and the new 2018 Maruti Swift isn’t an exception here. Keeping utility at fore, Maruti has incorporated multiple storage points inside the cabin such as bottle holders in all four doors, integrated cup holder in rear arm rest, driver side ticket holder and glovebox, etc. The hatch has more generous cabin space to offer that further enhance its practicality. The car sits on a longer wheelbase that translates into more space for the occupants with better headroom (by around 24mm), legroom and shoulder space. In fact, the luggage space has also been increased by 58-litres which is around 28% more than the previous generation Swift. Read – Maruti WagonR Set For A Generation Change 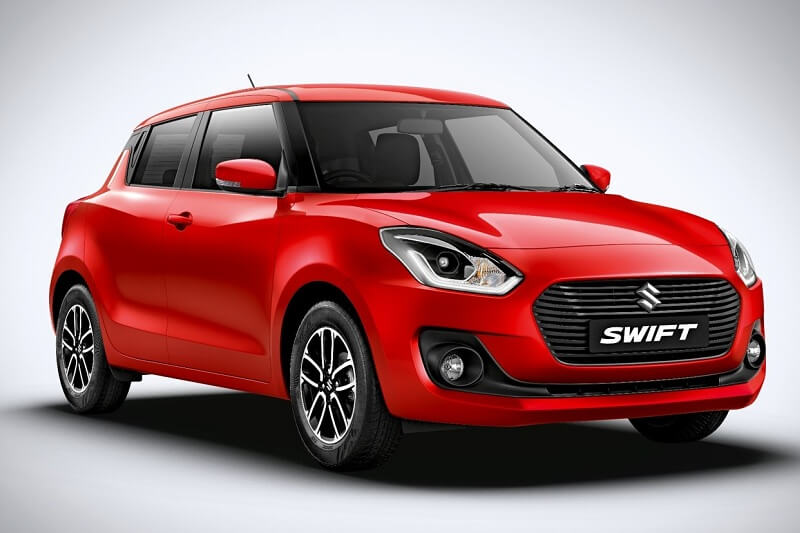 Compared to the previous mode, the safety quotient of the 2018 Maruti Swift has surely been classed up. The Indo-Japanese carmaker has loaded the hatchback with a range of active and passive safety features. All variants of the car get dual front airbags, ABS with EBD & brake assist and ISOFIX child seat anchors as standard safety fitments. The 2018 model year also gets front seat belt with pre-tensioner and force limiter, engine immobilizer, seat belt warning lamps, etc. What further makes it safer than the old model is Suzuki’s Total Effective Control Technology (TECT). It complies with frontal offset and side impact regulations and meets advanced regulations for pedestrian safety. Read About – New Maruti Ertiga | Maruti Ertiga Crossover

With an all-new look, spacious and better equipped cabin and fuel-efficient engines, the Maruti Swift has been defending its spot in the entry level B segment that offers other credible models. While the hatchback has retained the old engine setup, Maruti has calibrated them for achieving better fuel economy and performance. That said, the new Swift is the most fuel-efficient car in its category. Attributes such as more evolved design, feature-loaded cabin and frugal engines makes the new Maruti Swift 2018 a value for money car.

Designed on the Baleno's platform, the new-generation Maruti Suzuki Swift is lighter, stronger and stiffer than the old model. The hatchback receives significant design and feature upgrades.