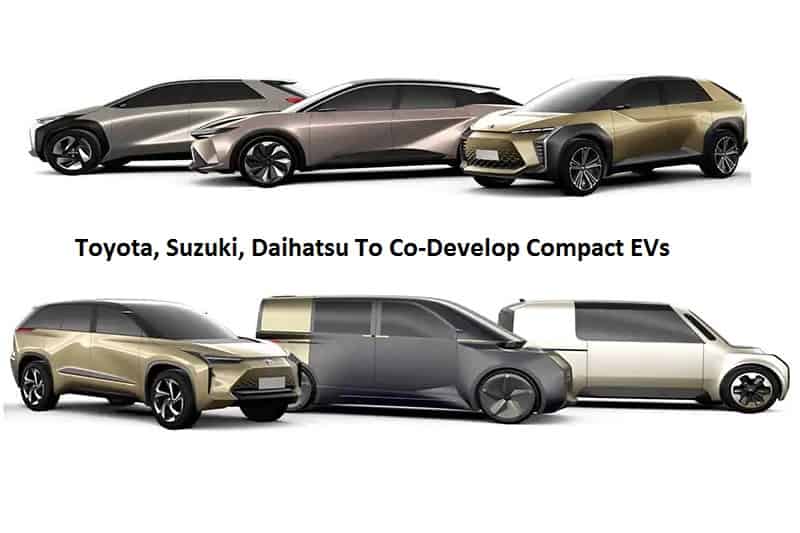 The first product developed under the Toyota-Suzuki partnership is likely to debut next year.

Toyota Motor Corporation recently announced that it will introduce a brand new battery electric vehicle (BEV) platform based on the TNGA (Toyota New Global Architecture) platform. Called the e-TNGA, the new platform will be co-developed by Toyota and Subaru. The Japanese carmaker also confirmed that it will launch 10 new BEVs by 2025. The new BEV range will include SUVs, Crossovers, MPVs and a sedan.

The company’s first BEV (Toyota C-HR) will make its world premiere at the Shanghai Motor Show in April, 2020. The Japanese carmaker aims to retail up to 4.5 million or more hybrid and plug-in hybrid vehicles and 1 million pure electric and fuel-cell cars by 2025. Toyota is collaborating with partners for vehicle development and the stable supply, improved durability and reuse of batteries. Read: Toyota and Suzuki Partnership Explained

Besides collaborating with Subaru (for e-TNGA platform), Toyota will join hands with Suzuki and Daihatsu for developing compact electric vehicles (EVs). Products developed under this partnership will initially target big markets including China, Europe and USA. India might also be on their radar.

While Toyota and Suzuki will co-develop affordable EVs for the Indian market, Toyota and Subaru will jointly develop mid-size SUV for the global markets. The first product developed under the Toyota-Suzuki partnership is likely to debut sometime next year. The carmakers have already established a Li-ion battery manufacturing facility in the country.

In 2017, Toyota and Suzuki signed an MoU to share technologies and jointly explore opportunities. Both companies agreed for sharing cross-badged models including Maruti Suzuki Vitara Brezza, Baleno, Ciaz, Ertiga and Corolla Altis. Toyota’s re-badged version of the Maruti Baleno – Glanza – was recently launched in the country.