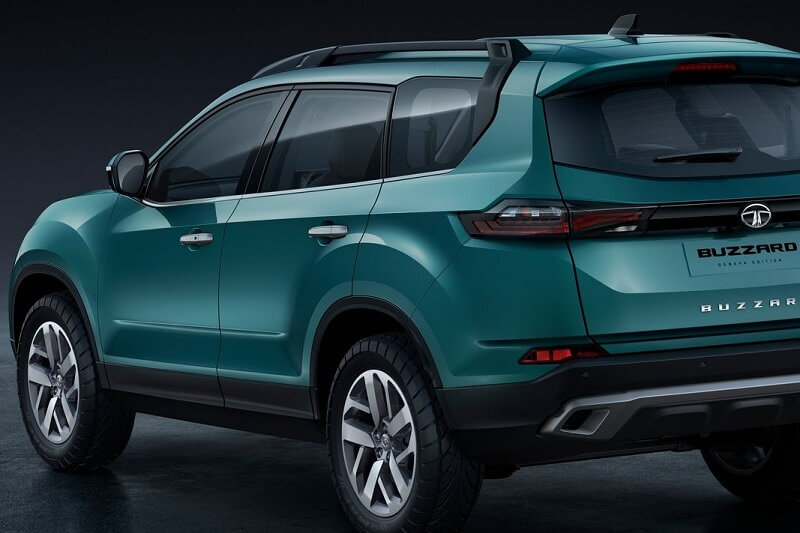 A new spy picture of the upcoming Tata Harrier 7-seater SUV has emerged on the web. The new image shows that the SUV’s final model could get the smaller size ORVMs (outside rear view mirrors). Earlier, the vehicle’s prototype was spotted with the large ORVMs that likely to cause huge blind spots for the driver.

Design and styling of the Tata Harrier-7-seater will be slightly different than the 5-seater version. It will get newly-designed taillamps, larger 18-inch alloys, a panoramic sunroof and a flatter roof line at the rear end. Read – Tata Buzzard Interior Details Revealed

As far as engine is concerned, the Tata Harrier 7-seater will use a 2.0L turbocharged Kryotec diesel engine that’s tuned for generating 170bhp and 350Nm of torque. This will make it around 32bhp more powerful than the Harrier 5-seater. Both manual and automatic gearbox will be on offer.

The 7-seater version of the Harrier was first showcased as Tata Buzzard at the 2019 Geneva Motor Show. Though, it might come with a different nameplate in India. Rumour has it the 7-seater SUV could be named ‘Tata Cassini’.

The production version of the Tata Harrier 7-seater SUV will debut at the 2020 Auto Expo. Alongside, the carmaker will also showcase the new Tata Altroz hatchback, Nexon facelift, Nexon EV, Tigor facelift and Tiago facelift.