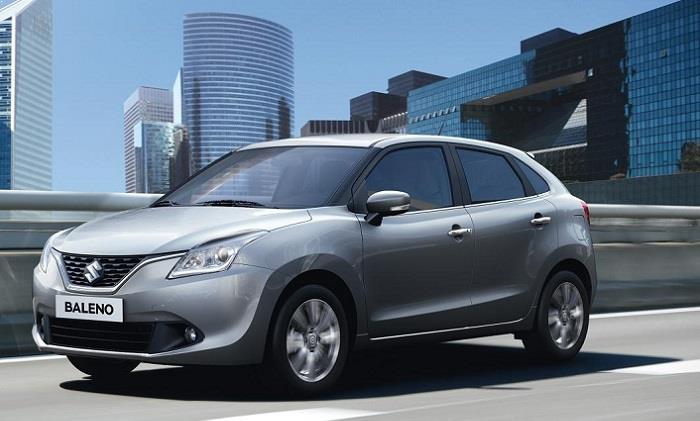 Maruti Suzuki’s much-awaited premium hatchback – the Baleno (aka YRA) – has finally made its global debut at the 2015 Frankfurt Motor Show. To be positioned above the Swift hatchback, the Maruti Suzuki Baleno will take on the Hyundai Elite i20, Volkswagen Polo and newly-launched Honda Jazz. This premium hatchback is reported to be launched in India on October 26, 2015.

In fact, the production of the hatchback has been commenced at Maruti Suzuki’s Manesar based plant. The company will export the India-made Baleno to Asian countries, and other global markets. The Baleno’s production version resembles to the Suzuki iK-2 concept, which was unveiled at the 2015 Geneva Motor Show. For international markets, the Baleno will be available with a new 110bhp, 1.0-litre Boosterjet turbo-petrol engine. While, the India-spec model is expected to be offered with two engine options – a 1.2-litre petrol and a 1.3-litre Multijet diesel.

Features like LED daytime running lights and LED tail-lamps will be offered only on the top-end variants. The Suzuki Baleno measures 3,995mm in length, 1,745mm in width and 1,470mm in height with a wheelbase of 2,520mm. The hatchback will be made available in six color options – Blue, Black, Grey, Orange and Silver.

Being a premium hatchback, the 2015 Maruti Suzuki Baleno will be more spacious than the Swift hatchback. As far as the features are concerned, the hatchback will be equipped with first-in-segment 7-inch SmartPlay infotainment system with Apple CarPlay , LCD display on instrument panel, 2-DIN audio system, power folding mirrors, navigation system, Bluetooth connectivity, automatic climate control, etc. It has a boot capacity of 355-litres.

For safety purpose, the car will get dual airbags, anti-lock braking system (ABS) with electronic brake-force distribution (EBD), electronic stability program, reverse parking sensor and keyless entry with push button start. The Baleno’s global model comes with the adaptive cruise control system. Though, there is no clarity if the India-bound model will be offered with this safety feature or not.

The European version of hatchback will be powered by a new 1.0-litre Boosterjet turbo-petrol engine that develops a maximum power of 110bhp and 169.9Nm of torque. For the Indian market, the Maruti Baleno will be available with two engine options – a 1.2-litre petrol and a 1.3-litre Multijet diesel. While the 1.2-litre petrol mill will be the more powerful version of the Swift’s petrol unit, the 1.3-litre diesel mills are borrowed from the Ertiga.

If reports are to be believed, the 1.2-litre petrol engine will deliver an estimated power out of 90bhp and 118Nm of torque. The 1.0-litre Boosterjet will also be introduced on the India-spec model, but at a later stage. Transmission options on offer will be a 5-speed manual and a CVT (on the petrol model).