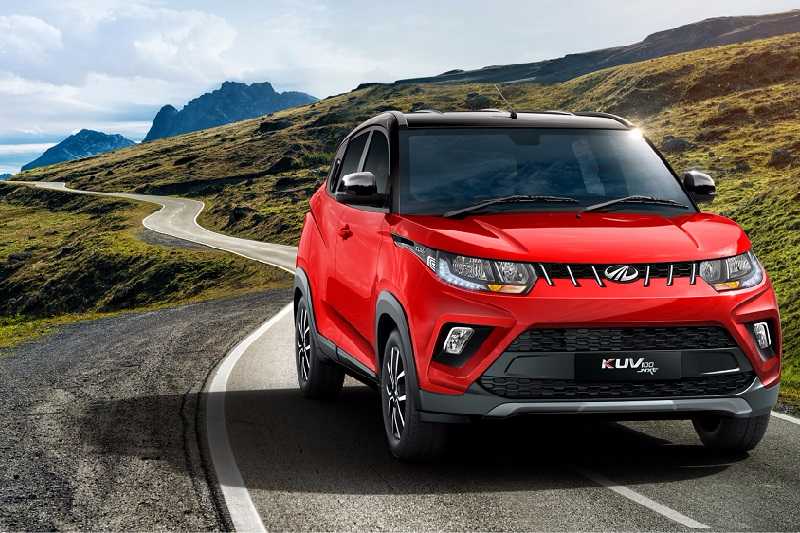 Mahindra has finally launched the long-awaited Mahindra KUV100 facelift in India. Named Mahindra KUV100 NXT, the micro SUV has been priced at Rs 4.39 lakh for base model and Rs 7.33 lakh for top-end model (ex-showroom, Delhi). The updated model is available in five trim levels – K2, K2+, K4+, K6+ and K8 – in both petrol and diesel guise. Changes to the model are mainly cosmetic. Instead of quirky design, the new KUV100 NXT 2017 gets a cleaner design and revised tail-lamps. The new model gets several aggressive design bits that give it a SUV-like profile.

The overall profile of the car remains largely unchanged, though it will get visual design updates. There are some noticeable changes to the exterior including an revised front with new muscular bumper, which increase the length of the SUV. That said, the length of the car will be increased by 25mm to 3,700mm. The old model was 3,675mm in length. The Mahindra KUV100 NXT features revised headlamps, while the grille seems inspired from the updated Mahindra XUV500. This crossover-ish hatch comes equipped with an updated front bumper, featuring a new mesh and has been revised to give it a fresh look.

There is a new plastic body cladding across the length and wheel arches. A faux skid plate finished in brushed aluminum is also offered at the front and rear, giving it a SUV-like profile. The side profile of the updated KUV100 looks largely identical to the previous model, except for the new alloy wheels and revised outside rear view mirrors. The toned down wheel arches have been fitted to newly designed 15-inch alloy wheels. At the back, the new KUV100 facelift features new clear lens taillights with chrome bezels and black highlights. The rear bumper has also been revised.

Inside the cabin, the Mahindra KUV100 NXT gets an all-black scheme with brushed silver treatment to give premium feel. However, the lower trims continue to feature grey interiors. It also gets several new tech features including a 7-inch touchscreen infotainment system with Mahindra’s BlueSense tech, navigation system and others. For passengers’ safety and security, the KUV100 facelift gets ABS (Anti-Lock Braking System) with EBD (Electronic BrakeForce Distribution), dual front airbags and ISOFIX child seat mounts. Furthermore, the new KUV100 NXT misses out on the five-seat layout and is now available with only 6-seat layout. That said, the five-seat can be availed on order. 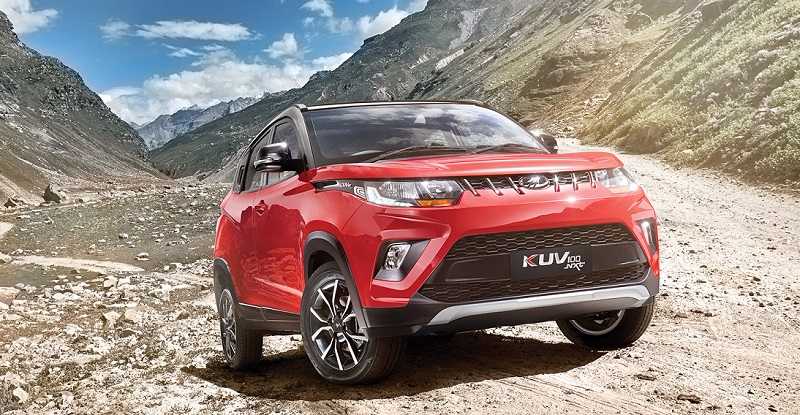 Developed on a monocoque chassis, the mini SUV directly rivals the Maruti Ignis and other B-segment hatchbacks including Hyundai Grand i10 and Maruti Swift. There are no mechanical upgrades on the Mahindra KUV100 facelift. It continues to derive power from the same 1.2-litre all-aluminum mFalcon G80 3-cylinder petrol and 1.2-litre mFalcon D75 diesel. While the former churns out 82bhp of power and 114Nm of torque, the oil burner is good for 77bhp and 190Nm of torque. Power is transmitted to the front wheels via a five-speed manual gearbox. Both engines have been tuned to offer better NVH (Noise Vibration Harshness) levels.

Despite several changes and new features, the KUV100 facelift gets cheaper than before.  Although, the change in price is marginal and KUV100 NXT is priced between Rs 4.39 lakh to Rs 7.33 lakh. Also Read – Upcoming Mahindra Cars In India 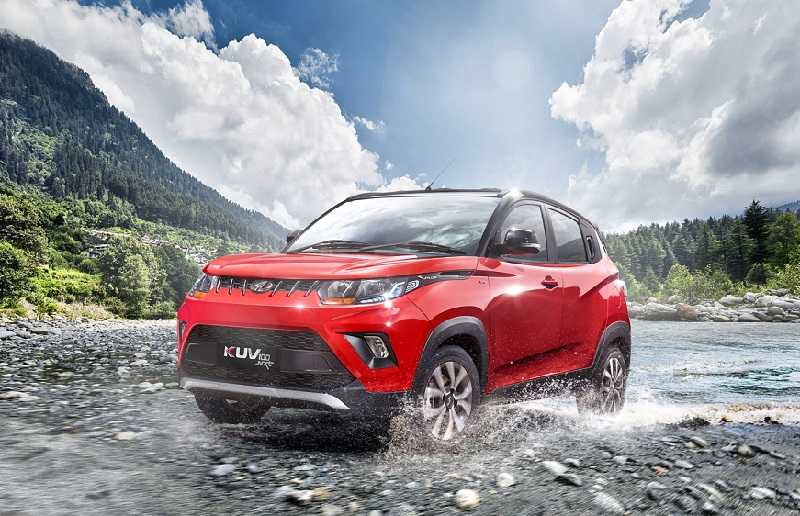 The updated KUV100 NXT is equipped with the same set of engines – a 1.2-litre mFalcon G80 3-cylinder petrol and a 1.2-litre mFalcon D75 diesel. A five-speed manual gearbox driving the power to the front wheels will come as standard. An AMT (Automated Manual transmission) equipped version will be launched in the next 6 months. The company claims that the engines have been tuned for enhanced fuel economy and better NVH levels. The strengthened engine mounts has helped the maker to curb engine noise and vibrations to a large extent. 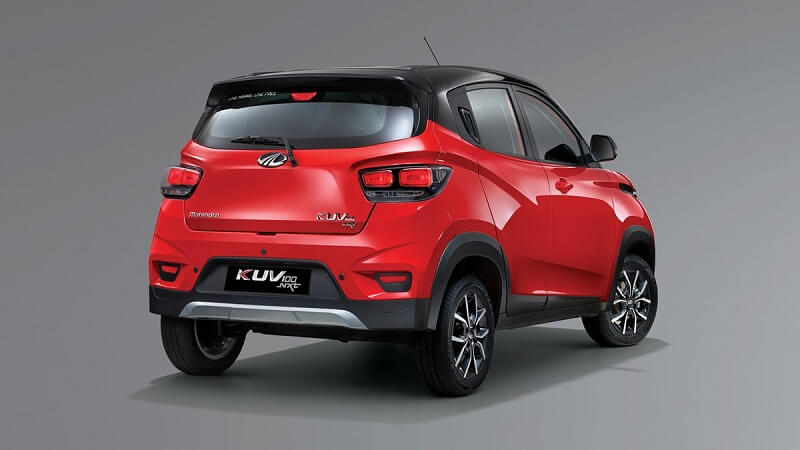 In terms of power, the gasoline engine dishes out 82bhp of power against 114Nm of torque and the diesel unit puts out 77bhp of power along with 190Nm torque. The additional air filter and suspension mechanism with longer travel rate helps improving the ride quality. Mahindra has also make changes to the approach and departure angel for a better performance on rough edges.

The Mahindra KUV100 carline continues to use the same petrol and diesel units from the pre-facelift model. As mentioned above, the engines has been tuned for enhanced fuel economy. The KUV100 NXT delivers 18.4kmpl and 25.31kmpl in petrol and diesel guise respectively.

The new Mahindra KUV100 NXT measures 3,700mm in length, 1,635mm in height and 1,715mm in width (including side door cladding). It will sit on a 2,385mm long wheelbase and will get a 170mm high ground clearance. This crossover-hatch has a turning radius of 5.05 meter and a fuel tank of 35-litres. It comes with a boot space of 243-litres, which can be extended by up to 473-litres by folding the rear seats.

While the micro SUV receives styling and design updates, Mahindra has also added the NXT prefix to its nameplate. Instead of quirky styling, the updated model now gets cleaner design. With these changes, the multiple creases and curvy bits have been gone. Most of the changes have been made to the front as it sports a revised bumper for a muscular stance. There is a slight increase in length of the model which now measures 25mm extra to 3,700mm from the previous 3,675mm. 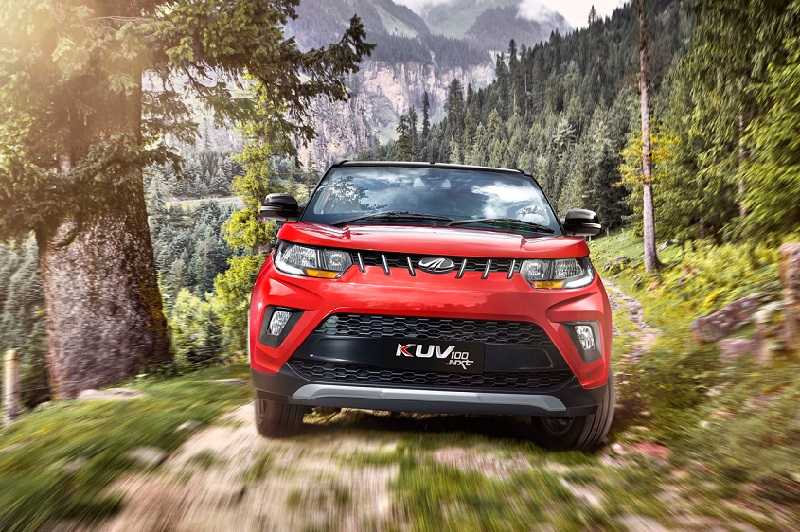 The front fascia is all-new, equipped with chrome braces, air intakes and fog lamps. Headlamps of the KUV100 facelift have also been revised and are stretched till the end of the LED daytime running lights. The faux skid plates on front and rear bumpers accentuate the sporty character.

Body cladding running across the body is all new and it also features sheet metal for doors and tailgate which comes with sharper and aggressive creases. At the side, the micro SUV gets 15-inch diamond cut alloy wheel, while the roof rails atop reinforce the sporty look. Rear will also come with a new tailgate spoiler. Colour options on the carline include 6 single tone and three dual-tone options. 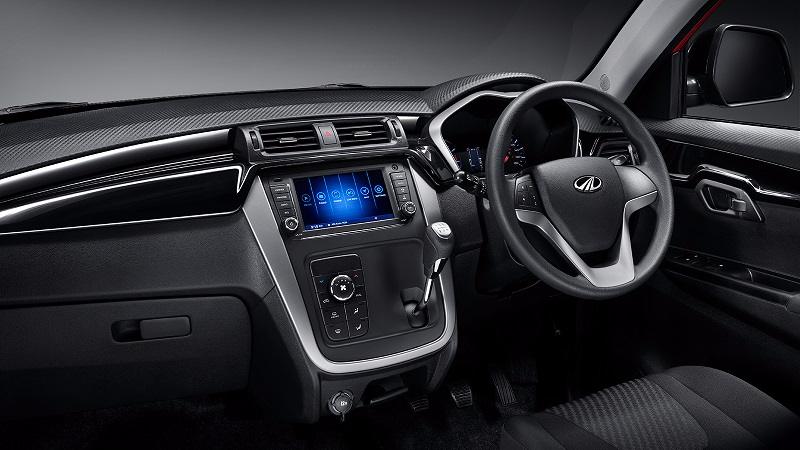 The spruced-up cabin is now offered in six-seat layout, while the five-seat layout will only be available in made to order basis. It is available with an all-black scheme with piano black finish. Along with additional features, the company has also used better material quality inside. Prominent connectivity bits such as a 7.0-inch touchscreen infotainment system with GPS navigation and maps from MapmyIndia are on offer. It additionally pack in remote lock/unlock for the tail gate, electrically adjustable/foldable ORVMs, rear parking sensors, multi-functional steering wheel, a cooled glove box, height adjustable driver’s seat, etc. On the safety front, the model has dual front airbags, corner braking control and ninth generation ABS (Anti-Lock Braking System) and EBD (Electronic BrakeForce Distribution).