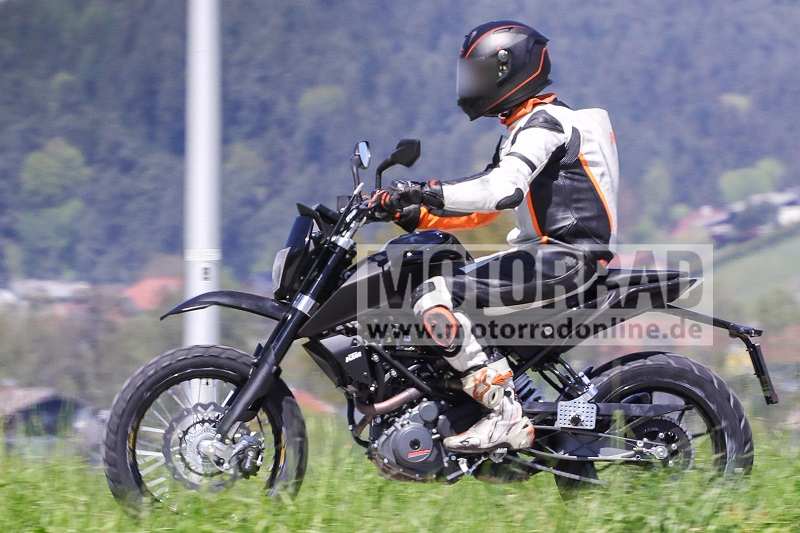 Based on the 390 Adventure, the KTM 390 Scrambler will use the 373.2cc, single-cylinder engine producing 43bhp and 35Nm of torque

Spy shots of KTMs upcoming bikes have surfaced online, interestingly, the two bikes are based on the 390 underpinnings and have no resemblance to the 390 Adventure test mule, snapped last year. Out of the two, the first one seems to be a far cry from what we have seen earlier in the spied images, although the second one is a KTM 390 Scrambler that has been spotted for the first time. That said, it seems to be a Scrambler like bike built on the underpinnings of 390 Duke. Although, KTM seems to have injected ample off-road bits to it.

Going by the images, the bike seems to retain the dimensions from Duke 390. In terms of styling, the front looks like the Adventure test mule that features a longer travel suspension, although it also gets fork shrouds. The raked-out front features a dirt-bike resembling fender and the tank seems to be inspired by the 390. The body work is minimal, and the plastic tank extensions add aggression to its looks. Moreover, the rear sub-frame looks similar in size, it has been tweaked. Riding on the larger spoke rims in front, the test mule carried standard cast rim at the back. While the two bikes have been caught testing recently, these are expected to be displayed at the upcoming EICMA Motor Show in November. Read More – New KTM RC 250 Spied Testing In India For First Time

Based on the 390 Duke underpinnings, the 390 Scrambler 390 is likely to share engine specs with the Adventure bike. It could additionally receive off-road traits and new bits to support the aggressive look. With all these, the bike is estimated to fall in the price range of Rs 2.5 lakh to Rs 3 lakh.

Spied recently, the bike is likely to make an appearance at the upcoming 2017 EICMA Motor Show. The model was recently caught undergoing test runs overseas. As for the launch, expect the bike to be launched towards the end of 2018. In India, the bike will be produced at Bajaj’s Chakan plant from where it will also be exported to overseas markets. Also Read – KTM 390 Adventure To Unveil In November, 2017

Built on the 390 Duke underpinnings, the Scrambler is likely to share engine set up with the Adventure 390. That said, the Adventure 390 will reportedly use the same 373.2cc, single cylinder, liquid-cooled engine that powers the regular RC 390. Although, KTM could calibrate the engine for improved power and torque output. That said, currently it puts out 43bhp against 35Nm torque.

While the dimensions seem to be retained, it is expected to share some styling cues with the Adventure such as the long travel suspension in front. The raked in front will most likely receive a dirt-bike style fender and the body work will be minimal. It will additionally receive plastic tank extensions, reworked rear sub-frame, larger spoke alloy rims at front, standard cast rim at rear etc.