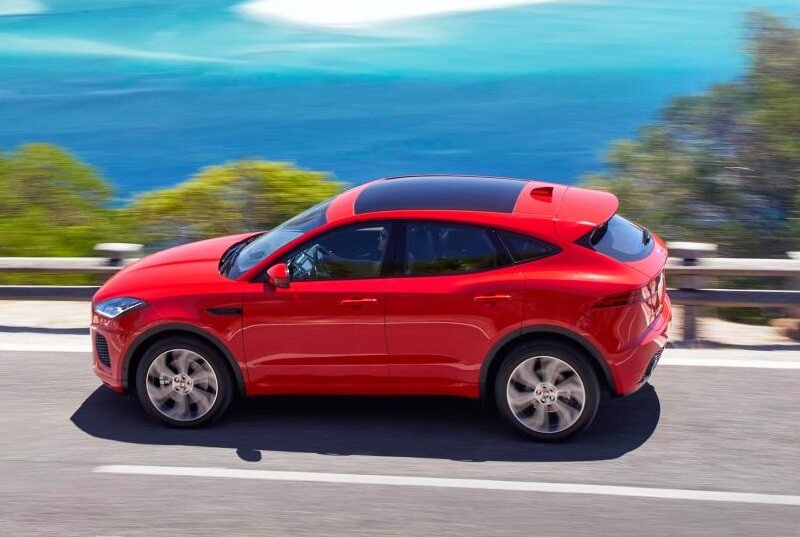 Based on Land Rover’s Discovery platform, the new Jaguar E-Pace SUV will take on the likes of Audi Q3, BMW X1 and Mercedes-Benz GLA.

Jaguar, the British luxury carmaker had revealed the Jaguar E-Pace small SUV last year. The smallest Jaguar ever rivals the BMW X1, Audi Q3 and the Mercedes-Benz GLA. The vehicle looks like a compact Jaguar F Pace and is claimed to be have ‘sports car-derived all-wheel-drive technology’. Featuring sports DNA, the SUV appeals to the driving enthusiast as well as SUV lover.

It is the second Jaguar to feature front-wheel-drive layout. Adding to it, this small premium SUV is also be the first Jaguar model produced outside UK at the Magna Steyr’s plant in Austria. The E Pace measures 4.4 meters in length, which is similar to the Audi’s Q3. While the bold and large grille resembles the bigger sibling, the upright all-LED front lights seems sourced from the F-Type.

The company has recently updated all-new E-Pace with a ‘self-learning’ Smart Settings technology and an Adaptive Dynamics suspension set-up. This AI-based Smart Setting learns the driver’s habit and adapts accordingly to make their life easier. Adding to it, the E-Pace can recognise the driver from the key fob and the driver’s smartphone Bluetooth signal. Adding to it, seat, and the climate control and infotainment system automatically adjusted based on the driver’s preferences. 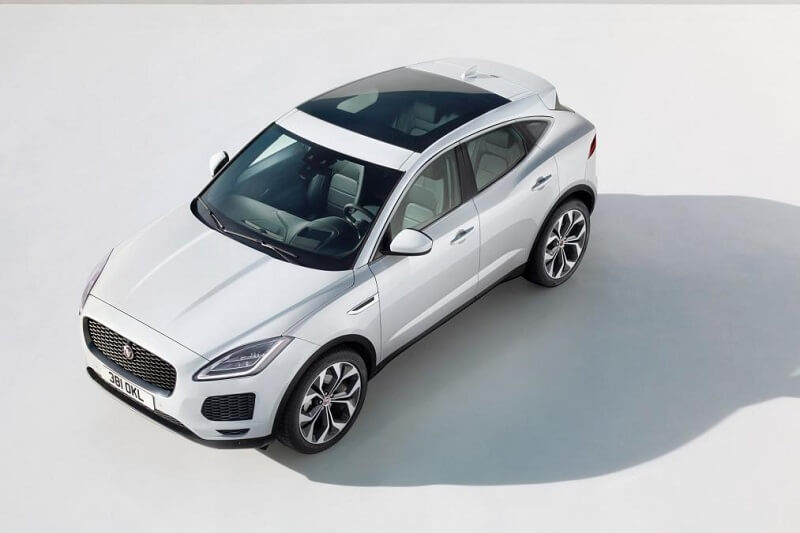 Besides, the small SUV also gets an entry-level petrol motor. The 2.0-litre 4-cylinder, turbo-petrol motor produces 198bhp. It sits below the 247bhp & 297bhp, 2.0-litre engines. The diesel version gets the transversely mounted 2.0-litre Ingenium unit that offers three states of tunes – 148bhp, 177bhp and 237bhp. The performance oriented 300PS petrol offered on the E-Pace is claimed to achieve 0-100kmph in mere 5.9 seconds. The E-Pace shares most of its design highlights from the F-Pace, but it comes with shorter overhangs and chunkier looks.

Based on Range Rover’s LR-MS steel platform, the E-Pace SUV is already on sale in select international markets. In India, the BMW X1 rival could be launched in early 2019. We will update you as soon as JLR reveals anything on the same. Read More – Jaguar F-Pace SUV Is India Bound

Jaguar confirms that the E-Pace will be offered in three trim levels – S, SE and HSE. Adding to it, the SUV will also get sportier looking R-Dynamic model. For the UK market, the SUV prices start at 28,500 pounds which is around Rs 23.77 lakh. Set to rival BMW X1 and Audi Q3, the Jaguar’s smallest SUV is expected to be priced in the range of Rs 32 lakh to Rs 36 lakh for the Indian market. 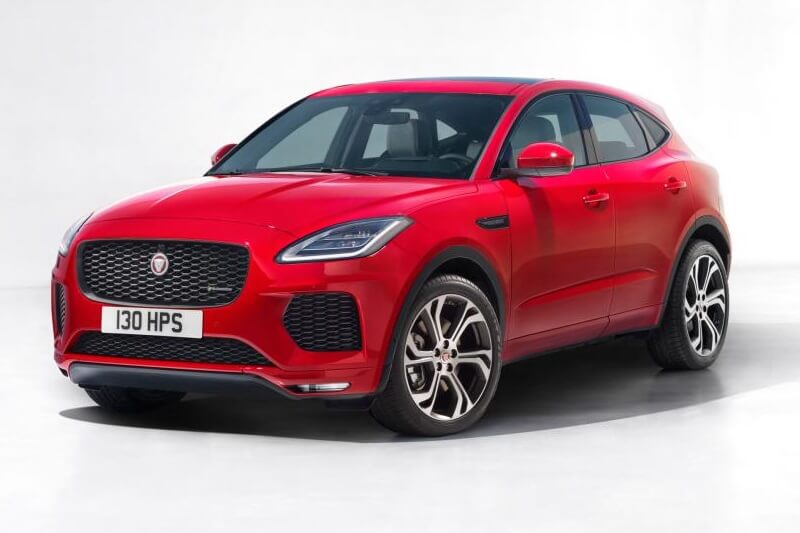 This premium compact SUV is powered by Jaguar’s new 2.0-litre Ingenium petrol and diesel engines that also powers the XE sedan. These engines are paired to either manual or the 9-speed automatic gearbox. The 4-cylinder diesel engine offers three states of tunes – 148bhp, 177bhp and 237bhp. On the other hand, petrol turbo engines will produce 247bhp and 297bhp of power respectively. The range-topping 297bhp unit accelerates to 100kmph from zero in just 5.9 seconds. Besides, the entry-level petrol variant gets the 2.0-litre 4-cylinder petrol engine that produces 198bhp of power. This new motor helps the SUV to achieve 0-100kmph in 8.2 seconds and returns a fuel efficiency of 14.62kmpl.

The Jaguar E-Pace is also equipped with Configurable Dynamics technology for customising throttle, steering and transmission. In order to give a rear-wheel drive feel, the SUV has Active Driveline and Torque Vectoring. The SUV will come in both front and all-wheel-drive options. 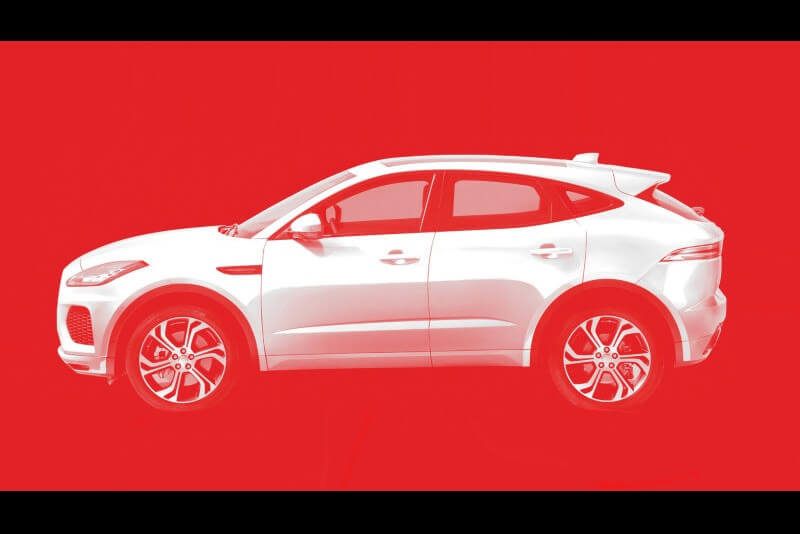 Based on the Discover platform, the new E-Pace looks like the baby F-Pace with some design elements shared with the F-Type. The front grille seems identical to the bigger sibling, while the overall front profile including LED headlamps looks similar to the F-Type. The rear too seems inspired by the F-Type, equipped with LED tail-lights and new chicane graphic. The flared wheel arches further adds to its sporty feel. 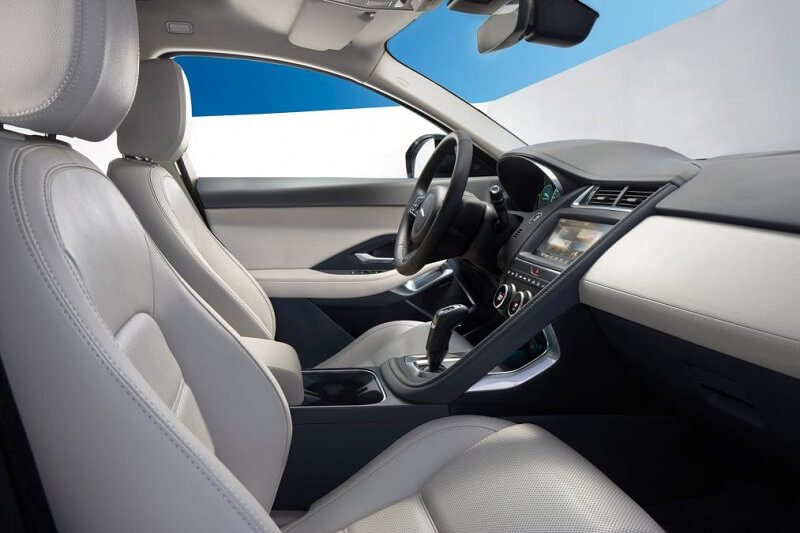 The cabin features F-Type theme and is equally comfortable for both short and tall height passengers, thanks to its tall seating position. Similar to the F-Type, the SUV gets 360 degree grab handle for the passenger on the side of the centre console. It is equipped with a 12.3-inch TFT digital instrument panel and a head up display. There is a centrally mounted 10.2-inch touchscreen infotainment system as standard. However, it misses out on Apple CarPlay and Android Auto connections and will continue to feature Jaguar’s InControl Pro suite for applications. Instead of Jaguar’s rotary gear selector, this baby SUV has a sports stick shifter. This SUV features up to five USB points for charging and a wifi hotspot that can be connected to eight devices. The E-Pace comes equipped with 577-litres of boot space, which can be further extended by folding the rear seats.