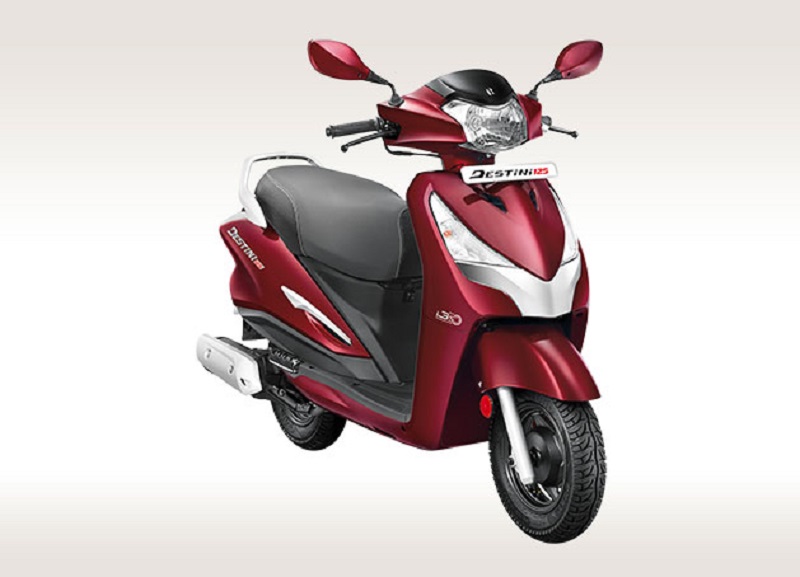 – Set to rival Honda Grazia and Suzuki Access 125, the Hero Destini 125 is the first scooter with Hero’s i3S technology.

Hero MotoCorp, World’s largest two-wheeler maker has launched its first 125cc automatic scooter – Hero Destini 125 in the Indian market. The new scooter was first previewed as Duet 125 at the 2018 Delhi Auto Expo. It is available in two variants – LX and VX – priced at Rs 54,650 and Rs 57,500 (ex-showroom, Delhi) respectively. The new 125cc scooter has been launched as a premium family scooter and is positioned above the regular Duet 110cc model. The new scooter is designed and developed at Hero’s Centre of Innovation and Technology (CIT) in Jaipur.

The new Hero’s 125cc premium scooter is fully designed and developed by Hero’s Centre of Innovation and Technology centre in Jaipur, Rajasthan. This scooter gets a new engine and slightly revised styling along with new features, which makes it tad expensive than the smaller 110cc sibling. The new scooter is available in two variants – LX and VX – priced at Rs 54,650 and Rs 57,500 (ex-showroom, Delhi) respectively.

Powering the new Hero Destini 125 is a new 125cc, single-cylinder engine that generates a maximum power of 8.7bhp at 6,750rpm and a peak torque of 10.2Nm at 5,000rpm. This is basically the bored out version of the 110cc engine that powers the Duet. It is the first scooter in its category to feature the idle-start-stop-system (i3S system). This technology improves the fuel efficiency of the vehicle. The air-cooled motor has been calibrated for delivering better low-end power for higher urban usability. Transmission duties are carried out by a CVT (Continuously Variable Transmission) gearbox. You May Also Like – Hero Xtreme 200R | Hero XPulse 200

The new 125cc scooter will get Hero’s i3S (idle start-stop-system) technology, which ensures higher fuel efficiency. The company hasn’t revealed the exact mileage numbers. We believe that the scooter could deliver around 60kmpl.

For braking, the Hero Destini 125 gets an Integrated Braking System (IBS) along with 130mm discs at front and rear respectively. Suspension mechanism of the scooter comprises of telescopic forks at the front and hydraulic shock absorbers along with single coil spring type hydraulic at the rear.  Also See – Hero Maestro 125 Launch & Other Details

The design of this 125cc scooter is largely similar to the Duet 110. However, it comes with subtle cosmetic and feature changes. It comes with new body graphics and i3S branding on the front panel. This scooter features a new digital display with the analog instrument console. It also gets silver finish treatment at the front, which adds to its premium character. In terms of equipments, the scooter gets dual-tone mirrors, tubeless tyres, mobile charging port, service reminder, a side stand indicator, boot light and external fuel filling. The new scooter is available in 4 paint jobs – Panther Black, Noble Red, Pearl Silver White and Chestnut Bronze.