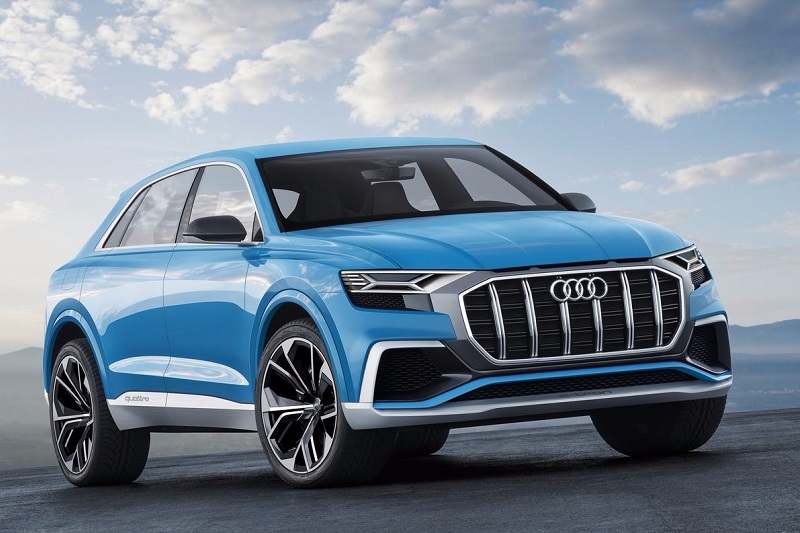 The all-new Audi Q8 will be a flagship model based on the MLB (Modular Longitudinal Architecture) platform.

Audi’s flagship SUV – Q8 was first previewed in its concept avatar at the 2017 North American International Auto Show in Detroit. The Q8 is essentially the sporty version of the Q7 SUV. Based on the MLB (Modular Longitudinal Architecture) platform, this new Audi SUV (production-spec) might have its world premiere at the 2018 Geneva Motor Show. In the Indian maker, the all-new Audi Q8 will lock horns against the Mercedes-Benz GLE and BMW X6.

The Ingolstadt-based luxury carmaker has begun testing the coupe SUV in India. Recently, an uncamouflaged prototype of the all-new Q8 has been caught on camera revealing its exterior design details. The latest spy picture confirms that the 2018 Audi Q8 will retain most of its design bits from the concept. It will feature LED taillamps, a stylish roof spoiler, sloping roofline, raked wind screen and a large bumper diffuser with two integrated exhaust pipes. Besides sharing its platform with the new-generation A7, this new Audi SUV will borrow a bunch of components and technologies with its donor sibling. Check Out –  Picture Gallery – 2017 Audi Q5 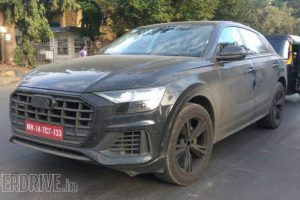 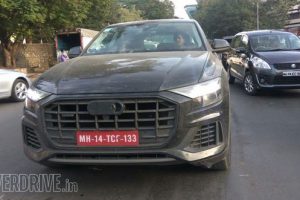 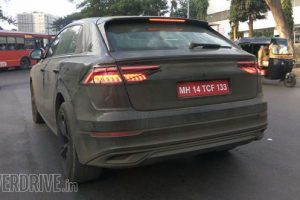 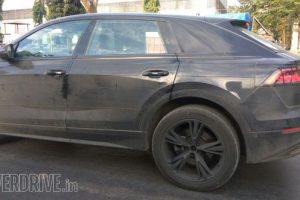 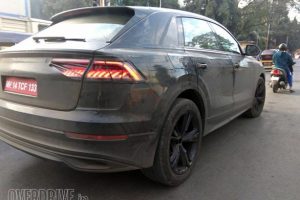 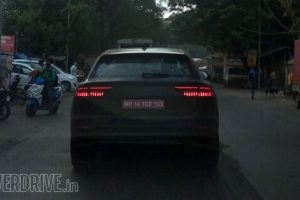 The all-new Audi Q8 will first go on sale in global market, followed by its India launch. The SUV’s production-spec version might make its global debut at the Geneva Motor Show that will be held in March, 2018. The vehicle is currently in its testing phase and is expected to hit Indian shores sometime next year. We will update the official launch date and details as soon as the German carmaker announces it. Read About – Audi’s Upcoming Smallest & Most Affordable SUV

In Audi’s product lineup, the Q8 SUV will be positioned alongside the A8, and compete against the Mercedes GLE and the BMW X6. Aiming to withstand arch rivals, the flagship SUV could be priced competitively. The Audi Q8 price in India could be as low as Rs 75 lakh for the base variant, and up to Rs 1 crore for the top-end model. 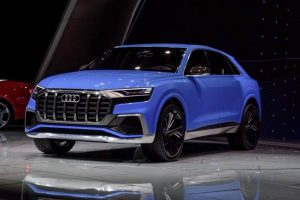 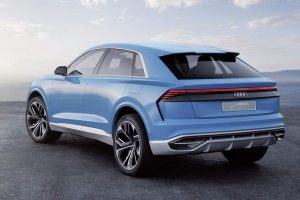 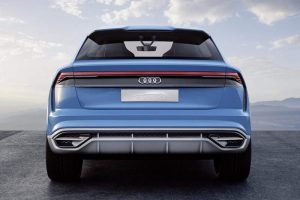 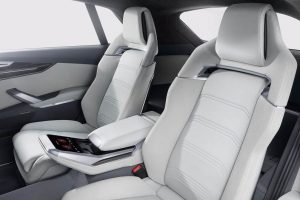 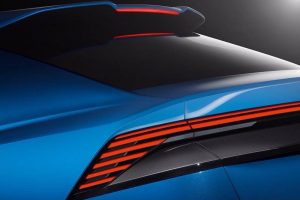 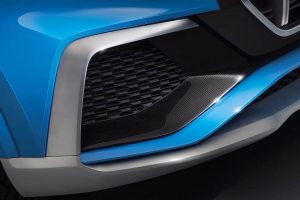 Referred as a cross between a SUV and Sport Coupe, the Audi Q8 represents the company’s latest design philosophy designed by Audi’s Chief Designer, March Lichte. The latest set of spy pictures reveals that production model of the SUV will share resemblance with its concept. Upfront, the car features an octagonal Singleframe grille with bold vertical slats and honeycomb inserts. It is likely to come with headlamps with an ‘X’ design and digital Matrix laser technology as we have seen on the concept. It might also get distinctive aluminium blade forming bottom edge of the front bumper and narrow LED light guide.

Towards the sides, the coupe SUV has athletic appeal with features such as bold creases, wide C-pillar that reminiscent of the Audi Ur-quattro from 1980s, strongly accentuated wheel arches, doors with brushed aluminium finish and quattro badge below the rear doors. At the rear, the car sports the long edge spoiler, strip of lights running over the entire width of the rear and aluminium diffuser. Also Read – Audi Q2 LWB Is Coming To India 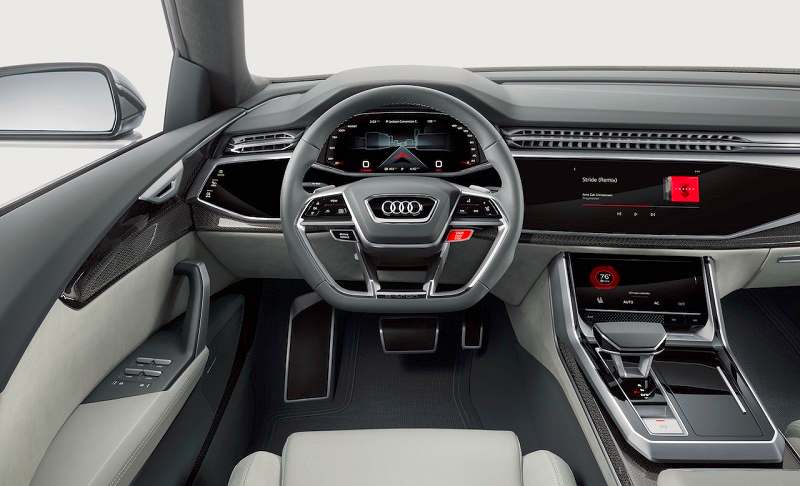 Cabin of the Audi Q8 (concept) looks different than most Audis on sale currently. Save for the turn on/ off parking aid and hazard lights operations buttons, the SUV gets touch-sensitive controls on a screen for most of the functions. There is a contact analogue Head-Up display with a new digital design. Other key features include Audi virtual cockpit with a 12.3-inch TFT display, MMI monitor integrated in the center of dashboard, climate control system display, and more.

The German carmaker plans to introduce the Q8 with most advanced autonomous driving system – Level 4 Autonomy – which is currently under development. The coupe SUV has sports seats and two individual seats in the rear. The seat upholstery has a combination of fine Nappa leather and Nubuk leather. Besides enough space for four occupants, the car offers a luggage compartment of 630-litres.

At the heart of the new Audi flagship SUV will be a 333bhp, 3.0-litre TFSI, 6-cylinder engine combined with a 100kW electric motor. The complete system delivers a claimed power output of 469bhp, while yielding 700Nm of torque. Paired to an 8-speed tiptronic automatic transmission, this turbocharged motor can do 0-100kmph in just 5.4 seconds. It comes with an electronic speed limit of 250kmph.

The rear mounted lithium-ion battery consists of 104 prismatic cells and has a capacity of 17.9 kWh. It takes almost two and a half hours to get fully-charged. The coupe SUV offers an electric range of 60km. It has Audi’s quattro permanent all-wheel drive system that works closely with the wheel-selective torque control, especially at corners. The SUV also comes with three driving modes – EV (electric driving), Hybrid and Battery Hold. Read – New Audi A8: Pictures & Launch Details 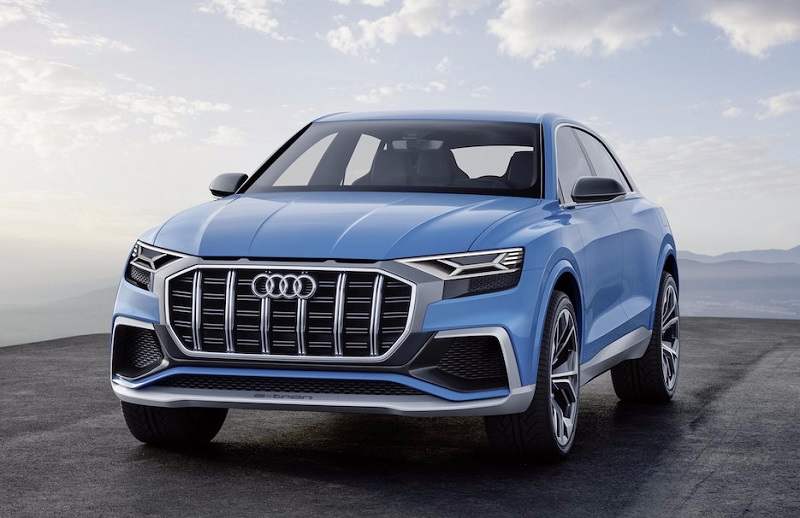 Audi claims that the new coupe SUV consumes 2.3 liters of fuel per 100 kilometers in the New European Driving Cycle (NEDC). Its carbon emission figure stands at 53grams per kilometres. Since the technical details of the India-bound model yet to be confirmed, it would be quite early to comment on the mileage figures of the SUV. If the India-spec version will come with the same 3.0L TFSI engine, it will be as frugal as the international model.