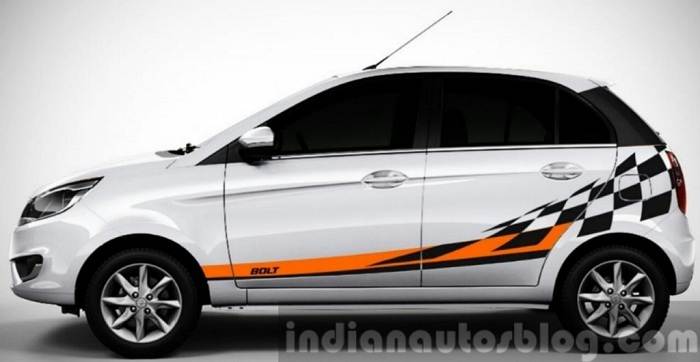 Tata Motors that recently launched Zest Anniversary Edition, is now planning to bring-in a special edition of the Bolt hatchback that has been revealed in leaked images. Expected to be available from October 1 to November 15, 2015, the Tata Bolt Celebration Edition will help the company to in-cash on the upcoming festive season. This special edition will be offered across all variants of the hatchback. The Bole Celebration Edition will come with an accessory kit worth Rs. 12,900. The same package costs Rs. 19,800, if purchased separately.

Tata Bolt Review – What Critics Say About the Hatchback

The accessory package includes a special Celebration Edition badge on the right side C-Pillar, decals on the doors, roof, hood and pillars, illuminated scuff plates and a rear spoiler. Since it’s just a limited edition, no mechanical changes have made to the car. The Bolt Celebration Edition will be powered by the regular 1.2-litre turbocharged, four-cylinder Revotron petrol and the 1.3-litre Multijet diesel engines that are paired to a 5-speed manual transmission. While the former produces a maximum power of 88.8bhp and 140Nm of torque, the latter one offers 74bhp and 190Nm.

Launched on January 22, 2015, the Tata Bolt has failed to attract buyers in the Indian market. The hatchback reported its worst monthly sales in April (i.e. 633 units), that is increased with marginal numbers in August, 2015 (i.e. 722 units). Since the Celebration Edition of the Safari, Indigo, Nano and other Tata cars helped the carmaker to pull-in decent sales, the Bolt’s special edition is expected to do same.