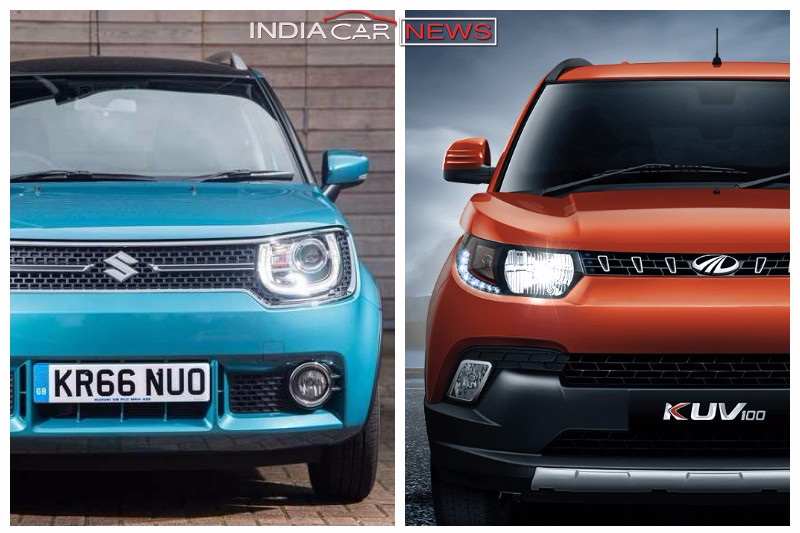 Maruti Ignis has finally rolled out in the Indian market at a starting price of Rs 4.59 lakh (ex-showroom). At this price, the Ignis becomes the most affordable car under Maruti’s premium range that will be retailed through Nexa dealerships. The Ignis carline has been made available in four trims – Sigma, Delta, Zeta and Alpha with two engine and two transmission options.

In India, Ignis is positioned against Mahindra KUV100 that has so far enjoyed a monopoly in the newly formed segment. Launched in January 2016, KUV100 was marketed as a sub-four meter SUV, albeit it looks more like an overgrown hatchback with elements that give it SUV-like stance. As Maruti introduce the Ignis as a strong contender in compact crossover space, we do a specs-based comparison between Ignis and KUV100 (Maruti Ignis Vs Mahindra KUV100).

The KUV100 subcompact SUV is available with both petrol and diesel engine options. In fact, it is the first Mahindra car to get a petrol powertrain. Claimed to deliver higher fuel economy, KUV100 features newly developed engines from Mahindra’s mFalcon family of engines. The 1.2 litre petrol G80 unit churns out a maximum power of 82bhp and 114Nm of torque as opposed to the 1.2 litre D75 turbocharged common-rail diesel mill that is good for 77bhp and 190Nm. Both the engines are mated to the five-speed manual transmission, missing out on the AMT unit.

The Ignis comes with a choice of two engines – a 1.2 litre K-Series petrol and a 1.3 litre MJD diesel. In terms of power, the 1.2 litre K-Series gasoline engine marginally outnumbers KUV100 at 84bhp as against 82bhp delivered by KUV100. On the other hand, the 1.3 litre diesel unit is slightly underpowered compared to the D75 mFalcon engine, putting out 73.8bhp of power. Torque developed by both the engines is on par with that of the KUV100. The petrol engine makes 115Nm whereas the diesel unit offers 190Nm. Transmission choice includes the conventional five-speed manual gearbox and an AMT unit.

The mFalcon petrol and diesel motors powering KUV100 are tuned to deliver impressive mileage. Talking of the petrol unit, it is claimed to return 18.3kmpl of fuel economy and the diesel engine is rated at 25.32kmpl (ARAI certified fuel economy).

Deriving power from Maruti’s tried and tested engines powering other models in the range; Ignis offers impressive fuel economy. The petrol powered Ignis returns 20.89kmpl while the diesel variants can run up to 26.80kmpl.

To be retailed through Maruti Suzuki India’s premium network Nexa, Ignis is positioned below Vitara Brezza. As for pricing, Ignis has been made available within the range of Rs 4.59 lakh to Rs 7.80 lakh, hence being the most affordable model under Maruti’s premium range.

Sharing underpinnings with XUV500, the sub-four meter KUV100 is conceived on the monocoque front-wheel platform and borrows some design cues from its elder sibling. Dimensions of the KUV100 measure 3,675mm in length, 1,635mm in height, 1,715mm in width with a 2,385mm long wheelbase. The 170mm of ground clearance is suitable for city roads. As for storage, the subcompact SUV offers 243 litre of space which canbe further extended to 473 litres by folding the rear seats.

Underpinning Suzuki’s new generation platform, the Ignis also measures less than four meters in length at 3,700mm. Other dimensions like width and height is less than KUV100 at 1,660mm and 1,595mm respectively. Coming to the wheelbase, it is slightly longer than KUV100 at 2,438mm. Similarly, the ground clearance is also marginally higher at 180mm. The luggage compartment space with the rear seats up 258 litres which can be expanded to 415 litres.