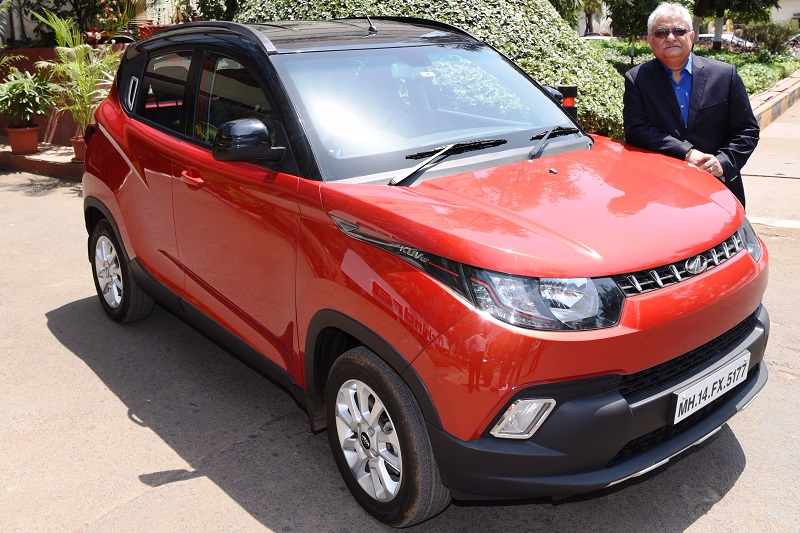 Mahindra KUV100, the popular mini SUV from the Pune-based carmaker, has achieved 50,000 units sales milestone in the country. First launched in January 2016, the KUV100 targets young buyers with its SUV-ish design, loaded cabin and affordable pricing. For celebrating the first anniversary of the mini SUV, Mahindra & Mahindra introduced a special anniversary edition at Rs 6.37 lakh (ex-showroom, Delhi) in January 2017.

Commenting on the sales milestone, Rajan Wadhera, President, Automotive Sector, Mahindra & Mahindra Ltd. said, “We would like to thank our customers for their support in achieving this milestone for the KUV100. It combines the appeal of an SUV and the practicality of a compact car, making it a compelling value proposition for buyers.”

Positioned below the Quanto and the TUV300, this mini SUV sits on a monocoque chassis and seems inspired by its larger sibling – the XUV500. In India, the Mahindra KUV100 goes up against the newly-launched Maruti Ignis. It also takes on the other B-segment hatchbacks such as Hyundai Grand i10. 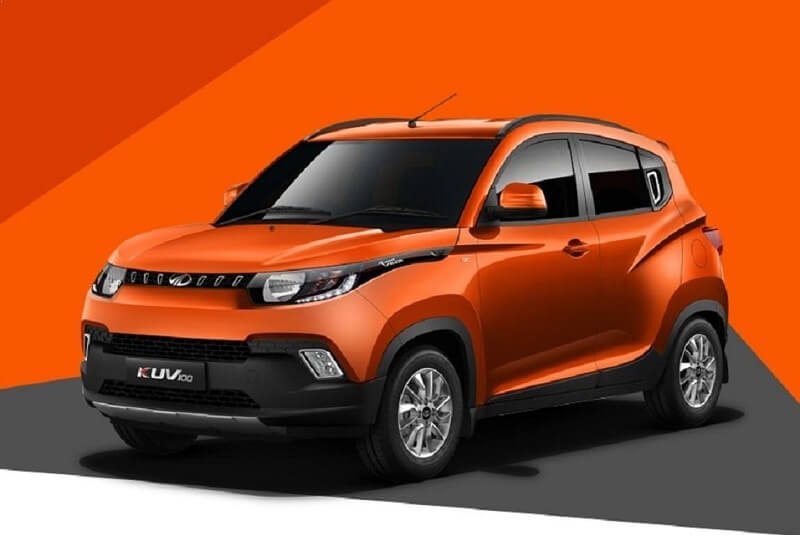 The KUV100 is available in a total of 13 variants spread across four trims – K2, K4, K6 and K8 – with two engine options. Each trim is available with both 5 and 6-seats layouts. While prices of the petrol models start from Rs 4.58 lakh and go up to Rs 6.36 lakh, the diesel variants are priced between Rs 5.60 lakh – Rs 7.35 lakh. All prices are ex-showroom Delhi. Read – 2017 Mahindra XUV500 Gets Several Industry-First Advanced Features

Mahindra introduced the all-new mFalcon G80 engine series on the KUV100. This also makes it the first Mahindra SUV to feature a petrol engine. Both the powertrains, developed jointly by Mahindra and Ssangyong, are claimed to be high on performance and fuel efficiency. Powering the petrol version is a 1.2-litre mFalcon G80 motor churning out a maximum power of 82bhp and 114Nm of torque. The all-aluminum mFalcon G80 isn’t only the first petrol engine developed by Mahindra, but the lightest unit in its segment as well.

On the other hand, the 1.2-litre mFalcon D75 turbocharged diesel engine makes 77bhp and 190Nm of torque. hanks to its light-weight components that help this oil burner weigh considerably lighter. Both the powertrains are paired to a 5-speed manual gearbox and the 2WD (two-wheel drive) system. Read – New-generation Mahindra Scorpio In The Works 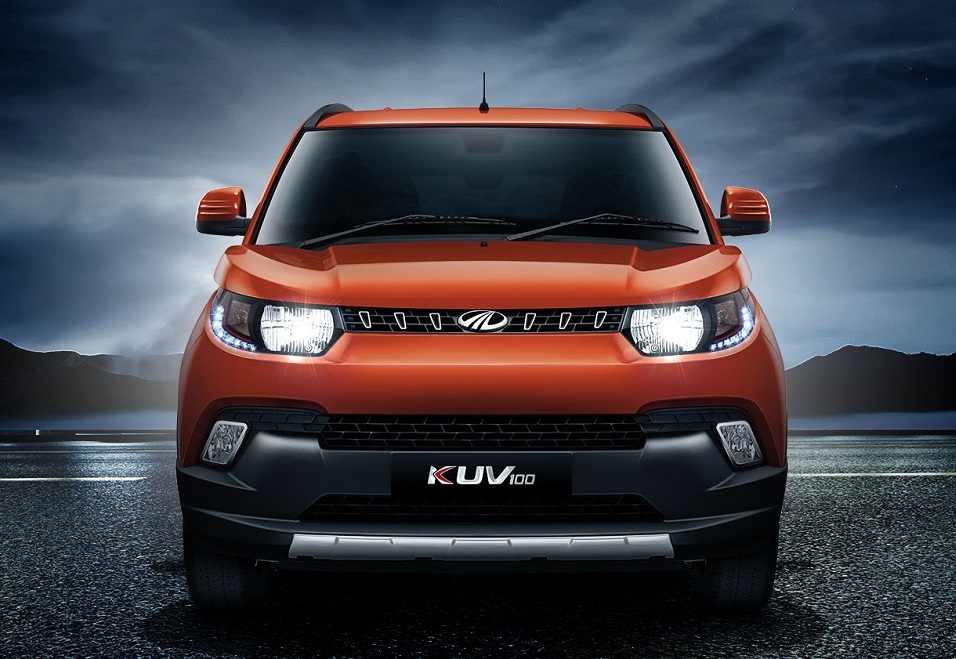 Mahindra’s mini SUV is quite impressive even on the fuel efficiency ground. The petrol model returns a claimed mileage of 18.23kmpl, and the diesel variant delivers an impressive 25.32kmpl. Read – Mahindra XUV700 SUV To Challenge Toyota Fortuner 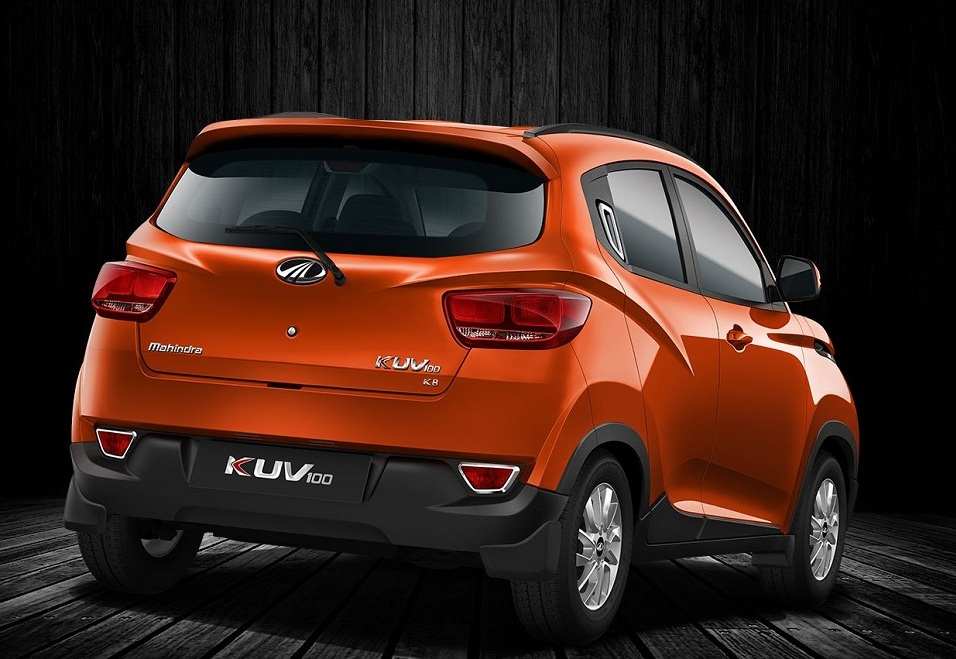 After the XUV500, the Mahindra KUV100 is the company’s second product based on a new monocoque chassis. Sporting SUV-ish stance and a high ground clearance, the KUV100 looks very unique. Its compact dimensions make it easy to drive especially on the congested city roads. Up front, the car gets wrap-around headlights running across the length of the side fenders, high mounted grille and hood, day time running lights and faux skid plate. The rear features distinctive tail lights and prominent character line. The wheel arches with black cladding and sloping roofline enhance its sporty appearance. However, the 14-inch wheels look disproportionate. The pillar-mounted rear door handles seem inspired by Chevrolet Beat.

Cabin is fairly spacious. Available with two seating configurations – 5 and 6 – the KUV100 offers a bench seat upfront for three occupants. The hand brake and gear lever has been removed to the centre console. Similar to the Datsun Go, it has pull type handbrake. The gear lever is easy to access, but hits knees of the front seat passenger. Seats are quite comfortable, but aren’t supportive. On the centre console, there is a 3.5-inch display for the infotainment system with AUX, USB and Bluetooth connectivity. Features like blue mood lighting, follow-me-home, puddle lights on all doors, lead-me lights and emergency brake indicators are also on offer. All variants of the vehicle get ABS (anti-lock braking system) with EBD (electronic brake-force distribution) as standard safety equipment, while the airbag protection is offered on the higher variants only. The company is offering dual airbags as an optional safety pack across lower trims of the vehicle. Other safety equipment include ISOFIX child seat mounts, automatic hazard lights on panic braking and speed sensing door locks.

Mahindra claims that the KUV100 meets current and future safety regulations. The KUV100 also comes with two drive modes – Power and Eco – combined with Mahindra’s Micro Hybrid technology. It has a boot capacity of 243-litres that can be extended up to 473-litres.