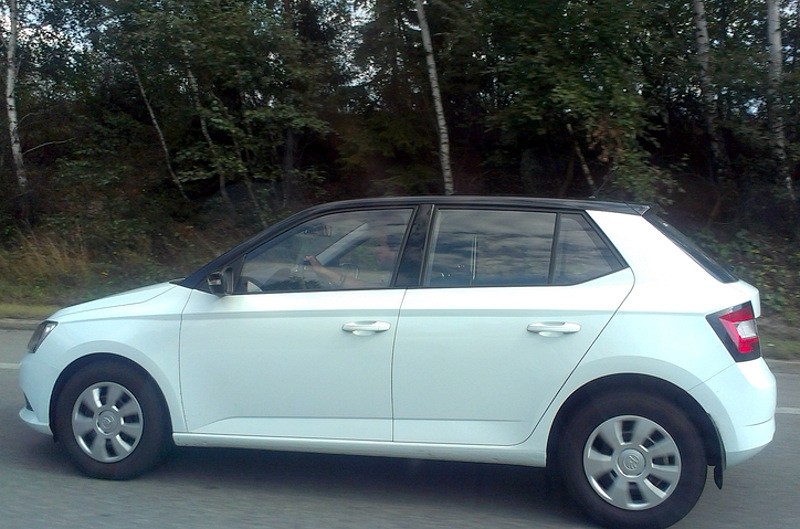 Scheduled to be unveiled at the 2014 Paris Motor Show, the 2015 Skoda Fabia hatchback will go on sale in international markets by early next year. Based on the thoroughly modified PQ25 platform, named as PQ26, the new Fabia is also likely to make entry into the Indian market by mid-2015. The company has already teased the hatchback and released some vital information of the car. Testing for the new Fabia hatchback has already started and the vehicle has been spotted several times. For the first time, the fully uncovered images of the 2015 Fabia on the road hit the web world. The vehicle will enter production later this month at Skoda’s manufacturing unit in Mlada Boleslav.  This hatchback gets the new Octavia inspired grille which is complemented by projector headlamps. The headlamp unit has elements including projector, halogen, and clear lens turn indicators and LED daytime running lights. The new model gets bolder looks and sharp creases running across the length of the car. It also features a roof mounted spoiler.

Skoda will introduce 4 petrol and 3 diesel motors, all engines will be EU6 compliant. All models will get start-stop and kinetic energy recuperation system as standard features. The transmission options are likely to the five-speed manual or a DSG dual clutch gearbox. The petrol model will be the new three- and four-cylinder engines. There will be a new 1.0-litre three-cylinder and 1.0-litre 4-cylinder turbocharged unit on offer. The 4-cylinder engine will develop a range of power output- 60 to 110bhp. The 1.4-litre diesel engine would offer a range of power from 74 to 103bhp.